The Week Ahead: Big week for blockbusters 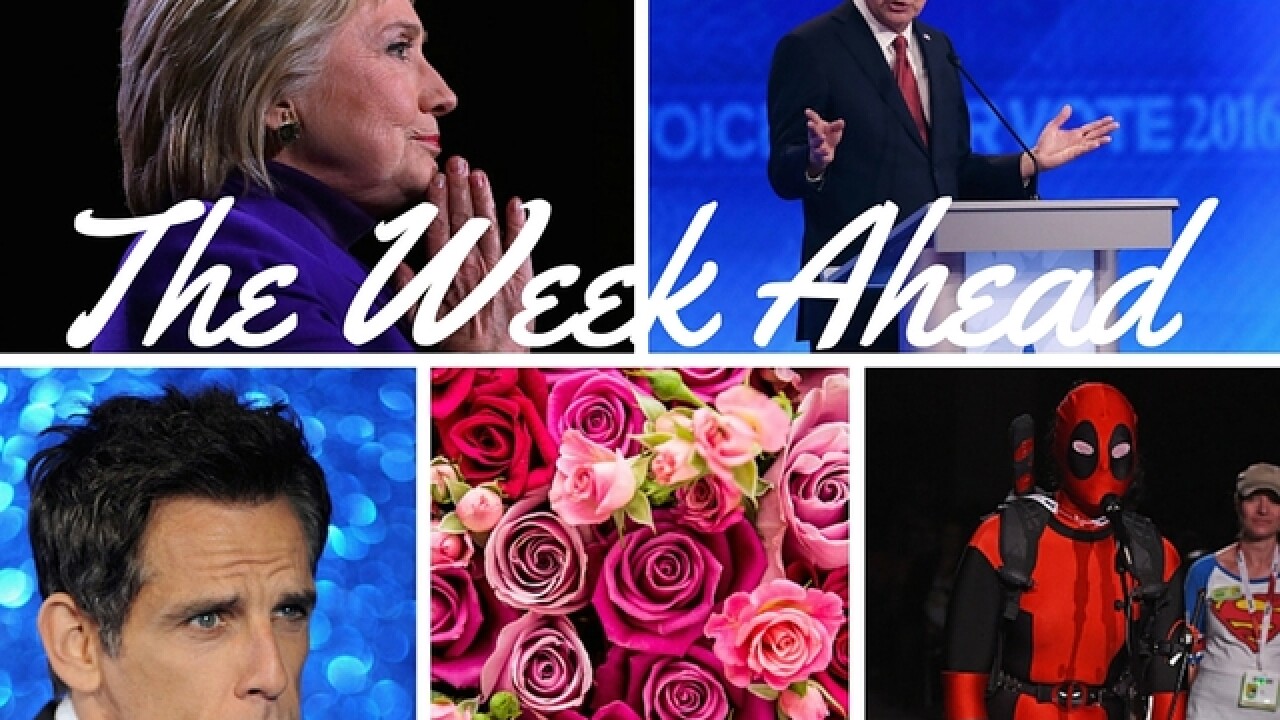 Here’s your one-week warning: Valentine’s Day is just seven days away. Between your last-second Heart Day preparations, here’s what to expect in the news for next week.

POLITICS
Voting in the 2016 Presidential Race officially began last week in Iowa, and Texas Sen. Ted Cruz proved to be the early winner. He rode a wave of momentum to victory in the Republican caucuses, with expected front-runner Donald Trump finishing in second and fast-riser Marco Rubio finishing in a strong third.

But early polls (and past results) have proven to not be kind Iowa winners. Cruz is currently in a virtual four-way tie for second place in the polls, with Donald Trump nearly 15 points ahead.

The Republican field finally shrunk a bit last week, with Mike Huckabee and Rand Paul leaving the race following disappointing finishes in Iowa. But the field could shrink even more after this week. Ohio governor John Kasich has already said he plans to leave the race if shows poorly in New Hampshire, and former Florida governor Jeb Bush and New Jersey governor Chris Christie could also drop out if they fall short in the polls.

Those still remaining in the race will face off in yet another GOP debate next Saturday in South Carolina.

On the Democratic side, Hillary Clinton scored a literal — and controversial — victory in Iowa, winning by the slightest of margins. But there’s no denying that the real winner was Bernie Sanders, who performed much better than expected at the polls. He should ride the momentum to a victory on Tuesday in New Hampshire, as the Vermont senator leads Clinton by nearly 20 points.

No matter who wins in New Hampshire, both candidates will return to the debate stage on Friday for a debate in Milwaukee.

MOVIES
One of the most highly anticipated comic book movies of the year premiers this week — just in time for those looking for a flick to catch after Valentine’s Day dinner. Deadpool stars Ryan Reynolds as a special forces soldier/medical experiment gone wrong seeking revenge. Come for Reynolds and stay for comedic genius T.J. Miller (Silicon Valley, Cloverfield).

For nearly a decade-and-a-half, fans have been championing for a sequel to the Ben Stiller/Owen Wilson classic, Zoolander. On Friday, fans will finally get their wish. Will Ferrell and Christine Taylor will also return for the sequel, and they’ll be joined by a slew of celebrities, including Benedict Cumberbatch, Kristin Wiig, Justin Bieber and Kanye West.

MUSIC
Kanye West is expected to release his new album this week — probably?  Since West announced the release date for his album, last month, the projects has gone through two name changes: from Swish to Waves to … well, no one really knows. He’s also gone through multiple track lists and a very public Twitter feud with fellow rapper Wiz Khalifa.

WAIT new poll. Which album title do you like best? @kanyewest

West is no stranger to procrastination. He reportedly hired super producer Rick Rubin to re-work almost all of his last album, Yeezus, just weeks before its release in 2013. No matter what the name of his album will be, West is still planning on hosting a listening party at Madison Square Garden on Thursday that will be streamed in select theatres worldwide.