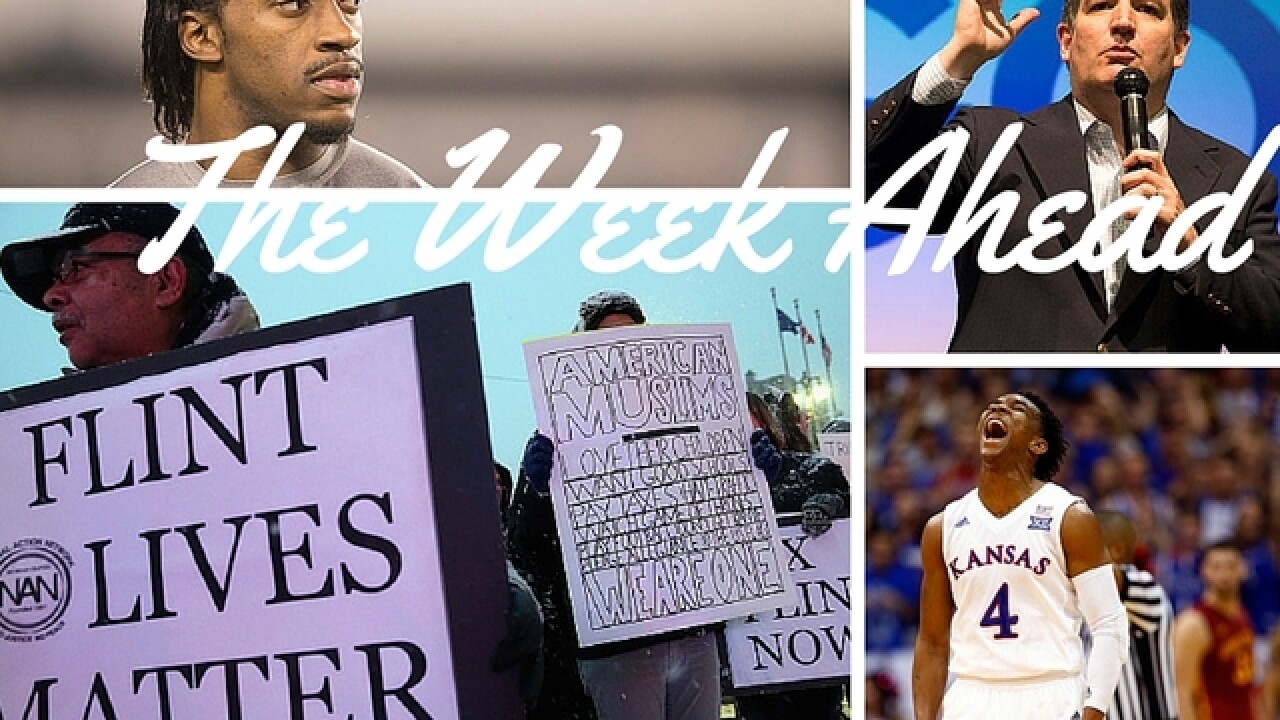 POLITICS
The race for the Republican and Democratic nominations for president continue this week, as candidates face a crucial election in Michigan. Following the water crisis in Flint and Detroit’s bankruptcy, voters could be looking for a non-establishment candidate — which would be good news for Donald Trump, Ted Cruz and Bernie Sanders. Michigan will prove to be the biggest prize of the week, with 59 delegates available on the GOP side and 147 available for the Democrats.

Mississippi will also host primaries in both parties on Tuesday, while only GOP voters will hit the polls in Idaho and Hawaii. Republicans will also host a primary in Washington, D.C. on Saturday.

This week will also be busy on the debate schedule, as Bernie Sanders and Hillary Clinton will square off on Wednesday in Miami — just three days after their last debate. The four remaining candidate will also meet in Miami on Thursday for a debate to be aired on CNN.

SPORTS
College basketball
March Madness is nearly upon us, and there are still a ton of questions yet to be answered before the tournament kicks off. Most notably: Who are the top seeds? In a year where no team can seem to hold on to the No. 1 ranking for more than a few weeks, as many as nine teams could make a case for a top seed.

Kansas and Oklahoma probably have a leg up on the race, but both teams will face dangerous competition throughout the Big 12 Tournament. Villanova, Xavier, Michigan St., Oregon and West Virginia could also grab a top spot with a strong performance this week.

But the most compelling television will come early in the week, when dozens of teams will compete for a handful of automatic bids in various mid-major conference tournaments. For hundreds of athletes, this will be the final opportunity to lead their teams to the big dance.

The tournament field will be made official on Sunday evening, with the tournament commencing the following Tuesday.

NFL Free Agency
Your favorite NFL team could have some new faces on it by the end of the week, as free agency begins on Wednesday. On that day, all contracts ending in 2015 will expire, meaning teams will be able to sign new talent and players will be searching for a bigger payday.

MOVIES
10 Cloverfield Lane
JJ Abram’s first film since Star Wars centers on three people stuck in a bunker in a post-apocalyptic world. Hanging out with John Goodman with a bunch of board games doesn’t seem like it would be that bad, but the trailer implies otherwise.

The Brothers Grimsby
The trailer for this Sacha Baron Cohen movie seems innocent enough, but if it’s anything like his other films (Borat, Bruno), there probably more than a few NSFW surprised in store.