Week Ahead: Will DiCaprio finally get an Oscar? 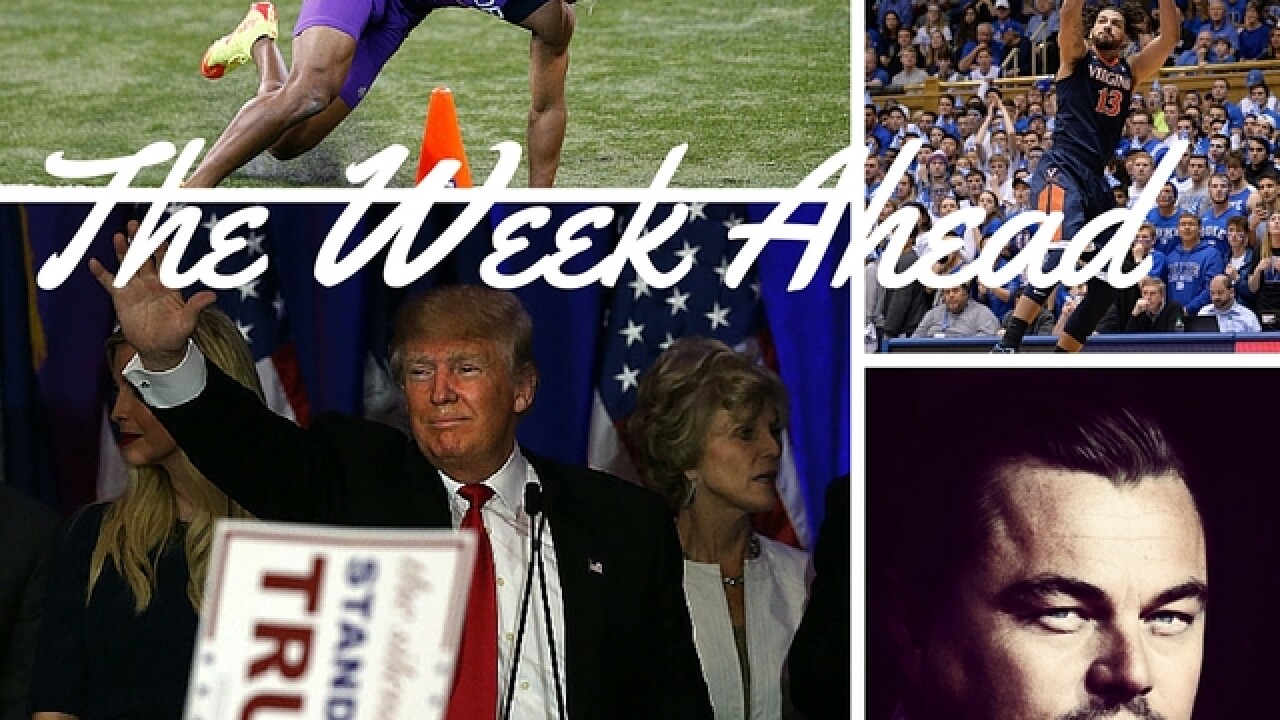 It’s been a roller coaster of weather systems throughout the past week and a half for much of the United States: Mild temperatures turned to an intense snowstorm, which in turn turned into a gorgeous, warm-weather weekend with a few sport thundershowers.

The roller coaster will continue again into next week, as the northern jet stream will dip into the Great Lakes and the Ozarks, causing a balmy mix of cold, rainy and snowy conditions. But hold on tight, spring is right around the corner in less than a month.

It’s a storyline year after year heading into the Academy Awards: When will Leo DiCaprio finally get his Oscar for best actor? He certainly could be the frontrunner this year, as he’s already earned a Golden Globe for his performance in The Revenant.

However, he faces stiff competition from 2015 winner Eddie Redmayne for his performance in The Danish Girl, as well as former winner Matt Damon for his work in The Martian.

The race for the Republican presidential nomination is finally thinning out, and though five candidates remain, it’s quickly becoming a three man race. Florida Senator Marco Rubio is quickly becoming the favorite among establishment candidates, while Texas senator Ted Cruz and businessman Donald Trump are fighting for the outsider vote. The picture should become much more clear on Tuesday, as Nevada hits the polls for the Republican caucuses.

Hillary Clinton extended her narrow lead over Sen. Bernie Sanders in the Democratic race on Saturday with a win in Nevada, and holds a substantial lead in Saturday’s Democratic primary in South Carolina.

This week’s primaries are the last chance for candidates to gain momentum before Super Tuesday on March 1, when delegates from 15 states and territories will be up for grabs.

SPORTS
March Madness is still a few weeks away, but this week marks an all-important week in college basketball. With the regular season winding down, teams will make one last push for a regular-season conference championship in the hopes of setting themselves up for a postseason run to the NCAA Tournament.

Perhaps no team has a bigger week ahead of them than No. 7 Virginia, who will square off with No. 11 Miami on Monday for second place in the conference. If the Cavaliers prevail, they’ll have the chance to take the top spot in the ACC tournament with a win over North Carolina.

NFL Scouting Combine
The NFL never sleeps. Though the Denver Broncos were crowned champions just over two weeks ago, teams have already moved into offseason mode. On Tuesday, officials from all 32 NFL teams will travel to Indianapolis for the college scouting combine, where the top college talent will be available for workouts and interviews. Prospects like Cal QB Jared Goff, Ohio State defensive lineman Joey Bosa and North Dakota State QB Carson Wentz will all make their pitches to be the top selection in April’s Draft.

MOVIES
When it was released almost 16 years ago, Crouching Tiger Hidden Dragon was hailed as a visual masterpiece. It’s still credited today as one of the most influential foreign films to ever land stateside.

Netflix is hoping for a repeat when they release the long-awaited sequel this weekend. Crouching Tiger, Hidden Dragon: Sword of Destiny is available to stream on Feb. 26.

MUSIC
It’s not quite disco, but The 1975 delivers a funky sound to the alternative world. The band that hit it big with “Chocolate” will release it’s second major studio album “I Like It When You Sleep, for You Are So Beautiful Yet So Unaware of It” on Friday.