The Week Ahead: Tide, Tigers and nomination time 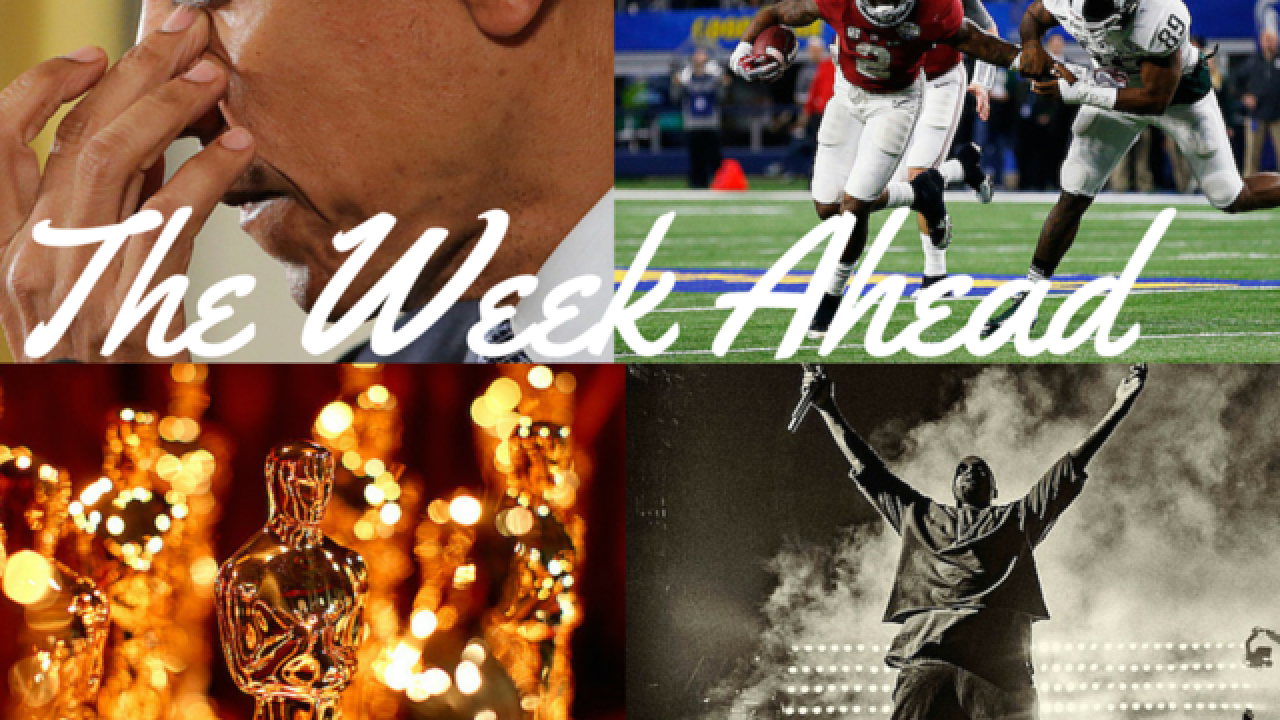 The first Congressional work week of 2016 proved to be all about guns, and this week should be no different. President Obama has yet to sign in to law his executive order for additional gun control, and is expected to make it official in the next few days. Meanwhile, a conservative Congress continues to plot ways to thwart the president’s plan — or at least get the measures in front of the Supreme Court.

SPORTS
The top two teams in college football will square off in the desert on Monday for a National Championship. Undefeated and top-ranked Clemson (14-0) will face off in Glendale, Ariz. with No. 2 Alabama (13-1), who are going for their fourth National Championship in six years.

Though Clemson will have a tough time stopping Alabama’s Heisman Trophy winner Derrick Henry, the Tigers’ defense has been more than respectable this season, ranking 18th in the country in rushing defense. On the other side of the ball, Clemson quarterback Deshaun Watson will need to find a way to pick apart the Crimson Tide’s third-ranked defense.

Though both teams have won National Titles in the past, Monday marks their first appearance in the finals of the two-year-old College Football Playoff.

MOVIES
OSCAR NOMINATIONS
On Friday, the American Academy of Motion Picture Arts and Sciences will unveil its nominations for the 87th Oscars. Critically acclaimed films like Spotlight, Trumbo, Carol and The Danish Girl are expected to receive nominations for Best Film. But in recent years, The Academy has expanded its nominations to include more commercial hits like Up in 2009 and Moneyball in 2011. Could Star Wars: The Force Awakens receive a nomination?

In addition, Leonardo DiCaprio will wait anxiously to see if he is nominated for Best Actor for his performance in The Revenant. The actor that gave us Titanic, The Departed and The Wolf of Wall Street has yet to win an Oscar for Best Actor.

RIDE ALONG 2
In 2014, a goof-off security guard played by Kevin Hart went on a ride-along with his girlfriend’s badass cop brother, played by Ice Cube. This Friday, the two team up again in this modern buddy-cop feature.

MUSIC
After waiting patiently for his new album for over a year, Kanye West fans finally got a release date on Friday — and then some. West announced that his new album, Swish, would drop on Feb. 11. He also announced the return of “GOOD Fridays,” meaning he’ll release a new single every Friday until his new album’s release. Long-time fans rejoiced last Friday when he returned to his roots with “Real Friends.”

No one knows what to expect this Friday, and Yeezy wouldn’t have it any other way.

PANIC! AT THE DISCO — The alt-rock band continues its renaissance on Friday, when they release their fifth studio album Death of a Bachelor on Friday.

HANK WILLIAMS, JR. — The country legend will release his first new album in nearly four years on Friday with the aptly titled It’s About Time.