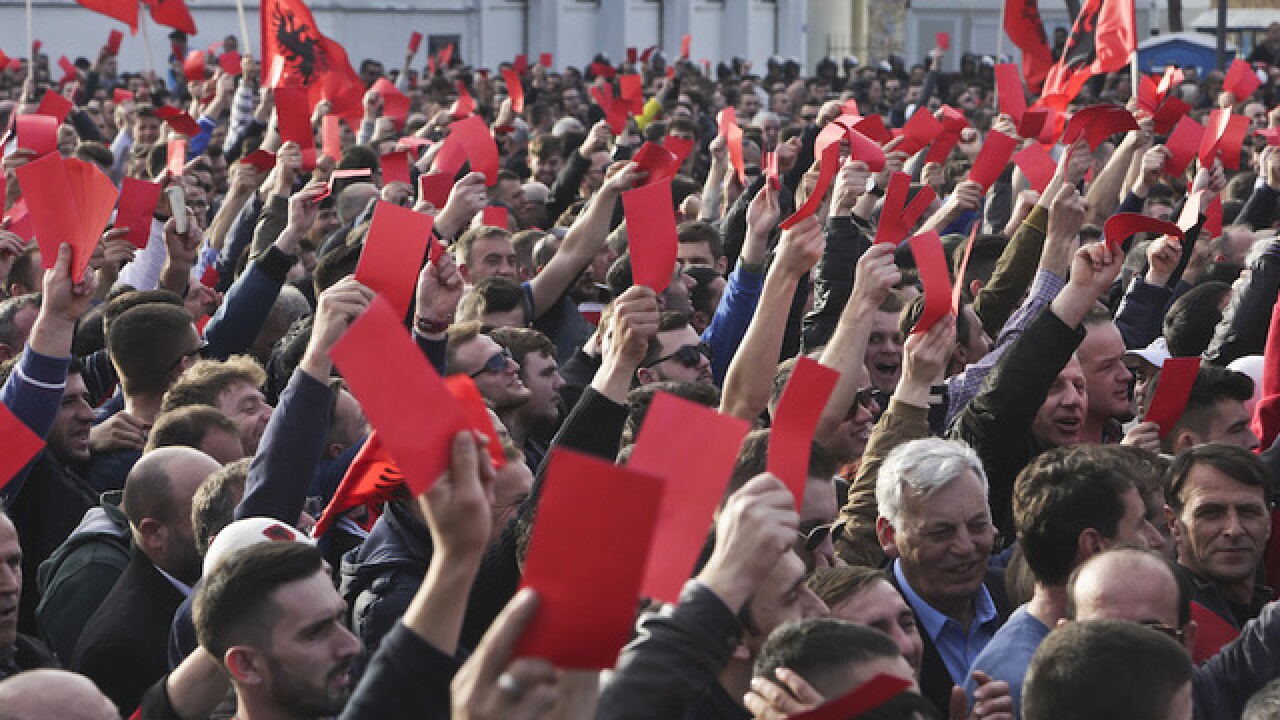 PRISTINA, Kosovo (AP) — Thousands of Kosovo opposition supporters called for the government to resign Wednesday on the eighth anniversary of the country's declaration of independence, accusing it of violating the constitution in reaching deals with Serbia and Montenegro.

Opposition supporters came from all over the country to the capital, Pristina, for the rally. Most of the participants held Albania's red-and-black national flag at the Skanderbeg Square while shouting anti-government slogans. Far fewer Kosovo ones were visible, along with a few U.S. and German flags.

"Kosovo will not allow itself to be led by people who have violated the constitution, its sovereignty," said Visar Ymeri, leader of the main opposition Self-Determination Movement party.

Ymeri set a Feb. 27 deadline for the government to resign and declare a new election, or "our protests will not stop."

The opposition said that more than 100,000 people participated in the rally, while police said about 15,000. They later dispersed peacefully.

The opposition rejects a deal between Kosovo and Serbia reached last year, giving more powers to ethnic Serbs in Kosovo. In December, the Constitutional Court decided that part of it was not in line with the constitution.

The opposition also rejects a border demarcation deal with Montenegro. They have attempted to disrupt the work of parliament with tear gas, pepper spray and whistles.

The government accuses the opposition of trying to come to power through violence. Prime Minister Isa Mustafa of the Democratic League of Kosovo said Wednesday it will continue its mandate until the next planned parliamentary elections on June 10, 2018.

Another protest was called for Friday when parliament may start procedures on electing a new president.

Deputy Prime Minister and Foreign Minister Hashim Thaci of the Democratic Party of Kosovo is the only self-declared candidate so far.

Kosovo's Western backers have denounced the opposition-led violence, calling on the opposition to resolve the political crisis in parliament.

Earlier Wednesday, the government held a ceremony to celebrate the eighth anniversary of the 2008 unilateral independence declaration with a military parade.

Kosovo's independence has been recognized by 111 countries, including the U.S. and major European Union nations. But it is rejected by Serbia, with support from Russia, which has blocked Kosovo from becoming a U.N. member.

Kosovo and Serbia are holding EU-mediated talks to try to overcome their differences.