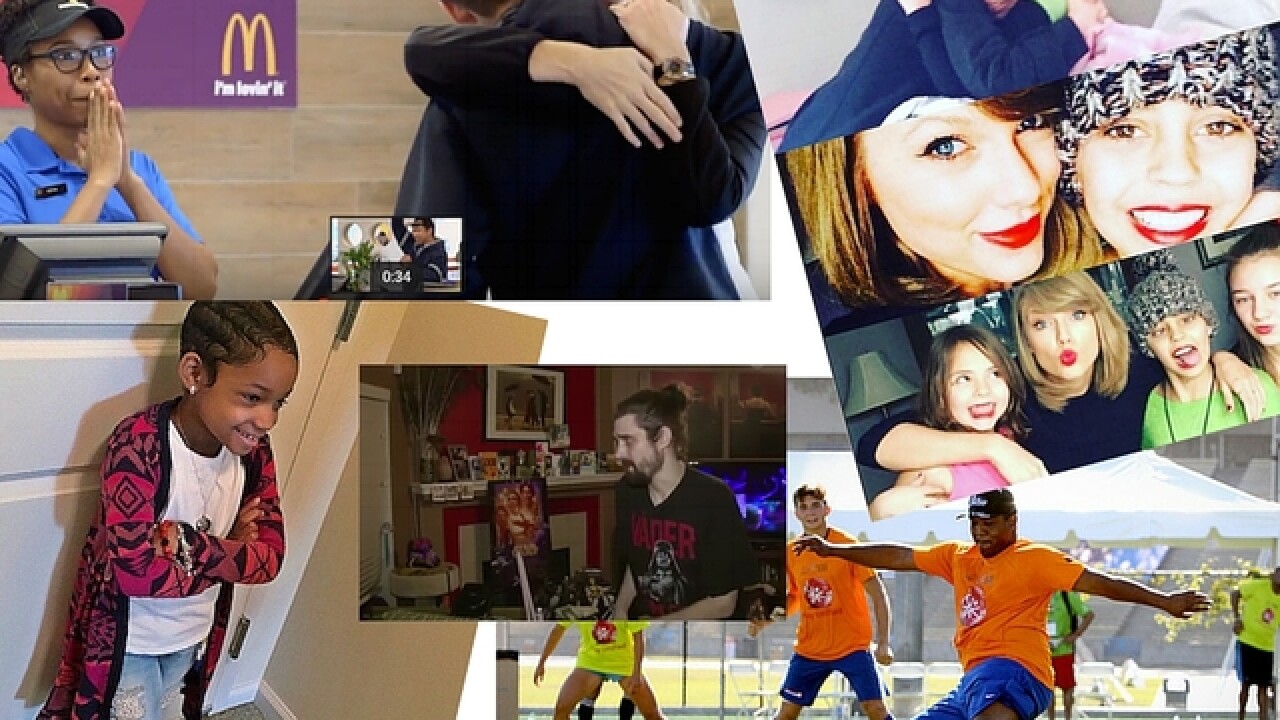 In a lot of ways, 2015 was a rough year. But luckily, there were plenty of stories that lifted our spirits and warmed our hearts.

Mark Zuckerberg to give away fortune

Like thousands of young parents, Facebook founder Mark Zuckerberg took to his own platform to announce the birth of his first child, Max. But that’s not the only news he shared.

Zuckerberg also announced that he plans to donate 99 percent of his Facebook stock to charity throughout the rest of his lifetime. Many experts value that stock at a whopping $45 billion — all of which will go to help those in need.

Priscilla and I are so happy to welcome our daughter Max into this world!For her birth, we wrote a letter to her about...

Star Wars: The Force Awakens has smashed records since debuting in theaters on Dec. 17. But even those superfans that spent hours in line waiting for tickets weren’t the first ones to see the film.

That honor belongs to Daniel Fleetwood. Fleetwood, a die-hard Star Wars fan, was diagnosed with cancer in 2012. Though he his condition progressively worsened, he held out hope that he would one day be able to see the new Star Wars film. But in October, Fleetwood experienced some setbacks and it became evident that he wouldn’t make it to the film’s debut.

That’s when friends took to Twitter with the hashtag #ForceForDaniel. The movement got the attention of some notable celebrities, including Luke Skywalker himself.

The Force Awakens director J.J. Abrams took notice, too. In early November, Daniel received the full cut of the new film, a month before its release.

In 2014, Bengals defensive lineman Devon Still made headlines when he announced that his four-year-old daughter, Leah, had been diagnosed with cancer. In response, he and the Cincinnati Bengals announced that they would team up to donate 100 percent of Still’s jersey sales to the Cincinnati Children’s Hospital and pediatric cancer research. According to reports, Still's effort helped raise over $1 million for organizations that fight cancer.

2015 proved to be a rough year for Still. Just weeks before the regular season, the Bengals cut him in order to get their roster down to the required 53 players.

But the bad news paled in comparison to the good news Still received in December. Just after Thanksgiving, Still shared that Leah is currently cancer-free.

Thanks for all the support and prayers! Just got the phone call that her scans showed NED (no evidence of disease)! #LeahStrong #StillKickinCancersAss

A photo posted by Devon Still (@man_of_still75) on

The Special Olympics has touched the lives of hundreds of children around the world since they were founded in 1968. But this year, the games took it to a new level.

Earlier in 2015, ESPN announced a renewed partnership with the Special Olympics, including unprecedented coverage of the games which took place in Los Angeles. In addition to airing the Opening and Closing Ceremonies live, the network also brought nightly highlights that were seen by thousands of people.

The games gave the entire country the chance to appreciate the talents of hundreds of talented young athletes that would have never had the chance to compete if not for the Special Olympics.

Not many people had a better year in 2015 than Taylor Swift. The 26-year-old pop star had a single reach the top of the charts, shattered records with the release of her album, 1989, and filled stadiums across the world. But in December, she took some time to visit a young fan and give her a lifetime worth of memories.

Thirteen-year-old Delaney Clements has been suffering from cancer for over a third of her life, and has been one of Swift’s biggest fans for just as long. After friends and family spread Clements’ story with the hashtag #DelaneyMeetTaylor, Swift stopped by Clements' Colorado home on her way to Tennessee for the holidays

A photo posted by Taylor Swift (@taylorswift) on

I was just laying down taking a nap in my room when my mom said I had a visitor. And I thought it might just be another person coming to see how I was. Then suddenly the most amazing miracle happens... The Taylor Swift walked into my bedroom and spent the afternoon with me just talking and hanging!!!! I am beyond Blessed for everyone's help and support!!! Thank you!!!Happy holidays!!??? @taylorswift #Delaneymeettaylor @bryyleiigh

A photo posted by ~Delaney Clements~ (@delaneyy.bugg) on

For many, the best part of the Super Bowl are the ads. But during Super Bowl XLIX in February, McDonald’s debut one of the most unique — and heartwarming — ad campaigns in recent memory.

The fast food giant announced that for the next few weeks, it would select random customers to pay for their food with “lovin’” — whether that be a hug, a dance, or a call to Mom. Thousands of customers throughout the next few weeks took advantage, and helped brighten everyone’s day.