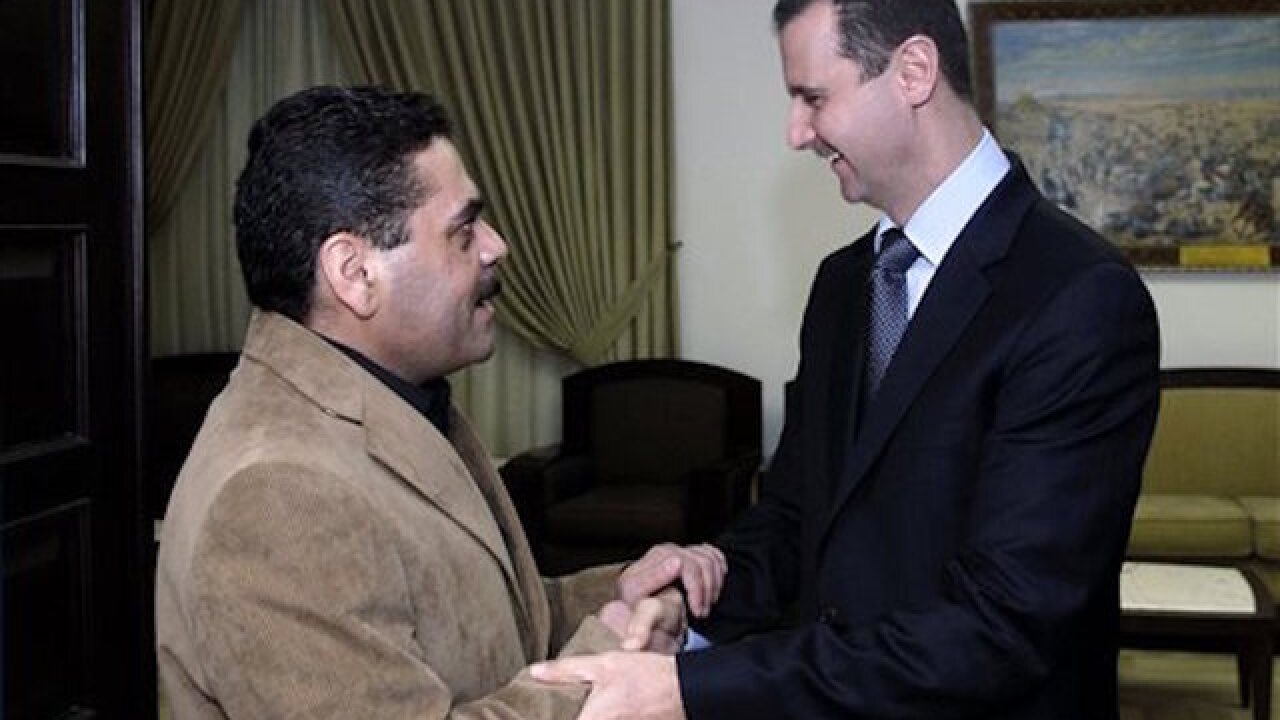 BEIRUT (AP) — An airstrike near the Syrian capital on Friday killed top rebel commander Zahran Allouch, the head of one of the most powerful Saudi-backed insurgent groups fighting against President Bashar Assad's government near the seat of his power Damascus, opposition activists said.

Allouch's death a month before expected peace talks between government and opposition representatives in Geneva is a blow to insurgents fighting to topple Assad and a boost to government forces who have been bolstered by the Russian military intervention in Syria in the past few months.

It was not immediately clear who was behind his death.

The Britain-based Syrian Observatory for Human Rights said an airstrike hit an Army of Islam meeting near the Damascus suburb of Otaya, killing several rebel commanders including Allouch. It said it was not clear whether it was a Russian or Syrian airstrike.

The Observatory said the warplanes struck a meeting during which Army of Islam commanders were preparing to launch an offensive against government forces and those of Lebanon's Hezbollah near Damascus.

The Local Coordination Committees earlier said that Allouch was killed along with his deputy and chief spokesman in an airstrike believed to be Russian in Otaya.

The Syrian military, in a statement published on the state-run SANA news agency, said later Friday that Allouch was killed in a Syrian army airstrike.

It said that the strike was carried out after a series of aerial reconnaissance operations against groupings of "terrorist" organizations and their headquarters in Eastern Ghouta. In addition to Allouch, it said the airstrike killed "a large number of commanders of Ahrar al-Sham and Faylaq al-Rahman."

It did not provide other details.

It was not immediately clear how Allouch's killing would affect his group, which is entrenched in the eastern suburbs of Damascus. Several rebel group commanders have been killed in the past — including most of the command of the ultraconservative Ahrar al-Sham group in a mysterious bombing in northern Syria last year.

For the government, it represents a further boost following recent military advances by the army, which has been on the offensive in several parts of the country since Russia began its military campaign in late September to shore up Assad's forces.

Hezbollah's Al-Manar TV led with the news of Allouch's killing, touting it as a victory. Syria's state news agency SANA highlighted the news, reporting the killing of the "terrorist" Zahran Allouch. They did not say who was behind the airstrike that killed him.

Mazen al-Shami, an opposition activist based near Damascus, said warplanes believed to be Russian fired 10 missiles at the site where Allouch and top commanders in his group were meeting in Otaya. He said several officials and commanders were killed or wounded.

Another activist based near Damascus, Hadi Munajed, said four warplanes flying at high altitude attacked the meeting killing Allouch and other officials. He said he believed the warplanes were Russian because Syrian fighter jets fly at lower altitude and are not as accurate as the Russians.

"He was martyred this afternoon," Munajed said via Skype, referring to Allouch.

Allouch, who was in his mid-40s, was widely known to be supported by Saudi Arabia and Turkey. He was one of the most powerful rebel commanders with thousands of fighters controlling large parts of the eastern Damascus suburbs known as Eastern Ghouta and Douma. In addition to fighting government forces, the Army of Islam faction fought pitched battles against its rival, the Islamic State group near Damascus.

A former prisoner who was released in a general amnesty after the uprising against Assad began in March 2011, Allouch joined the armed opposition and formed the Army of Islam — which became one of the most organized rebel factions in Syria.

Critics accuse him of sectarian politics and brutal tactics similar to that of the Islamic State group.

He is blamed by other opposition groups for the December 2013 kidnapping of four prominent activists including human rights activist and lawyer Razan Zaytouni. He denies holding them although they were kidnapped from an area under Army of Islam control.

Allouch regularly made sectarian comments against members of Assad's Alawite sect as well as Shiite Muslims, although when he spoke to western media earlier this year he said all sects should be part of the rule in future Syria.

Earlier this year, after government airstrikes on the suburbs of Damascus killed dozens, Allouch placed some Alawites that his group was holding in cages in public areas and markets, using them as human shields to try to prevent further airstrikes. Men and women were put in large metal cages on top of trucks that drove around Damascus suburbs.

Most of the Syrian militants, like Allouch, are Sunni Muslims and see themselves as oppressed by Alawites.

His group was behind the shelling of Damascus in recent months with mortar shells, including an attack that targeted the Russian Embassy. Such attacks have killed and wounded scores of civilians.

His death comes a month before peace talks between the Syrian government and the opposition are scheduled to begin in Geneva.