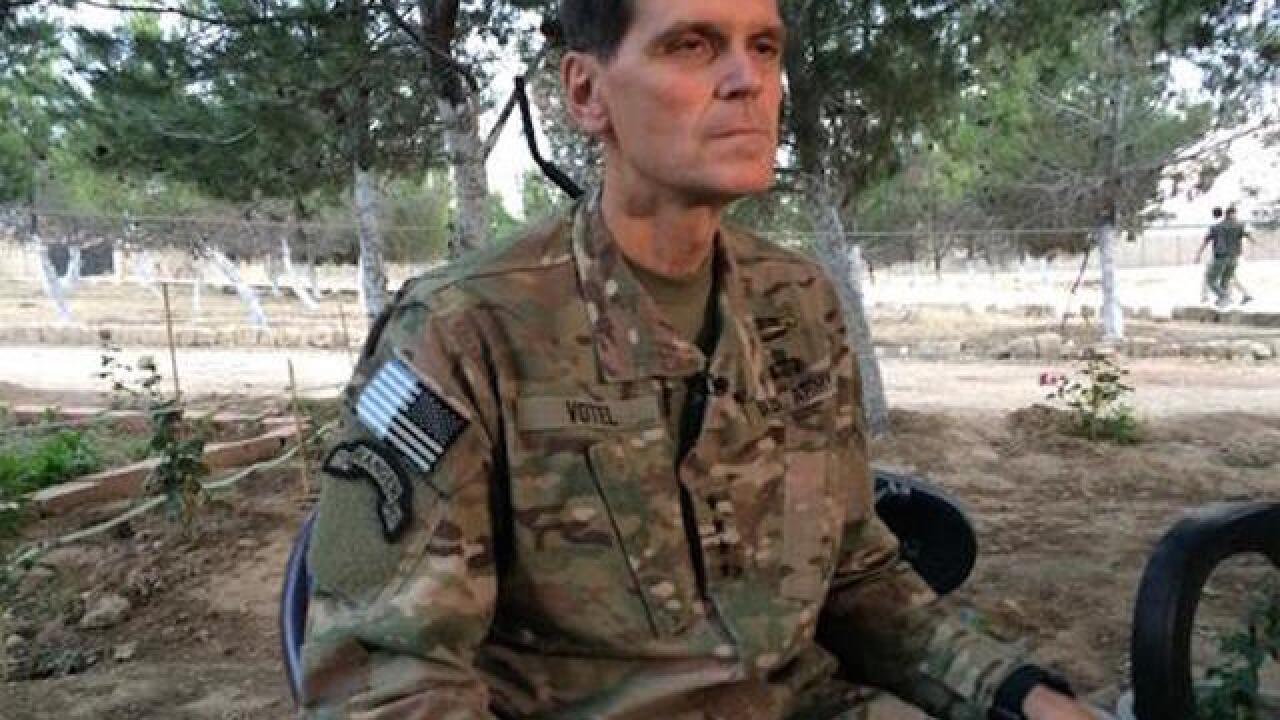 Robert Burns
<p>Army Gen. Joseph Votel speaks to reporters Saturday, May 21, 2016 during a secret trip to Syria. Votel said he is encouraged by progress in building local Syrian Arab and Kurdish forces to fight the Islamic State. (AP Photo/Robert Burns)</p>

NORTHERN SYRIA (AP) — The top U.S. commander for the Middle East secretly visited Syria on Saturday for a first-hand look at efforts to build cohesive alliances of Arab, Kurd and other local fighters to defeat the Islamic State.

Army Gen. Joseph Votel, who is head of U.S. Central Command, became the highest-ranking U.S. military officer known to have entered Syria since the U.S. began its campaign to counter the Islamic State in 2014.

Votel flew into northern Syria and spent nearly 11 hours in the country. He met with U.S. military advisers working with Syrian Arab fighters, and conferred with leaders of the Syrian Democratic Forces, an umbrella group of Kurdish and Arab fighters supported by the U.S.

A small group of reporters accompanied Votel on a flight from Iraq under ground rules that, for security reasons, prohibited disclosing his visit until after he had left Syria.

Votel landed at a dusty outpost, surrounded by wheat fields, that serves as a U.S. camp for American military advisers who are training Syrian Arab troops in basic soldiering skills. Splitting off from the reporters who flew in with him, Votel then visited several other undisclosed locations in Syria before returning to the camp.

Aides said Votel's flight into Syria was the first made in daylight by U.S. forces, who have about 200 advisers on the ground but no combat units. Military ground rules for the trip prohibited reporting the kind of aircraft Votel used, the exact location of where he landed and the names and images of the U.S. military advisers, who said they have been operating from the camp since January.

An Associated Press reporter and journalists from two other news organizations were the first Western media to visit the secretive operation.

In an interview as dusk fell and he prepared to fly out of Syria, Votel said his visit had hardened his belief that the U.S. is taking the right approach to developing local forces to fight IS, an acronym for the Islamic State.

"I left with increased confidence in their capabilities and our ability to support them," he said. "I think that model is working and working well."

The U.S. has struggled to find an effective ground force to take on IS in Syria, where President Barack Obama has ruled out a U.S. ground combat role. This presents a different problem than in Iraq, where the U.S. at least has a government to partner with.

The problem in Syria is complicated by the fractured nature of the opposition to the government of President Bashar al-Assad. The U.S. Is trying to develop credible Arab fighters to retake Raqqa, the Islamic State's self-declared capital, while Syrian Kurds have retaken territory from IS in other parts of northern Syria.

The U.S. is supporting what it calls the Syrian Democratic Forces, which is predominantly comprised of Syrian Kurds, numbering at least 25,000 fighters, with a smaller element of Syrian Arabs, numbering perhaps 5,000 to 6,000. The U.S. is trying to increase the Arab numbers.

The last known high-level U.S. official to visit Syria was Brett McGurk, Obama's envoy to the coalition fighting the Islamic State. He spent two days in Syria in late January, including a tour of Kobani, the small town near the Turkish border where Kurdish fighters backed by U.S. airstrikes had expelled an entrenched group of Islamic State fighters a year earlier.

Votel's predecessor, Gen. Lloyd Austin, who was leading Central Command when the U.S. kicked off airstrikes in Syria in September 2014, never visited the country. Votel's decision to go reflects his emphasis on getting an up-close look at all aspects of the counter-IS campaign early in his tenure.

Syrian Arab commanders who were made available for interviews at the U.S. camp Saturday said their forces are gaining battlefield momentum but also need a lot more help. They were quick to say the U.S.-led coalition should pitch in more.

Qarhaman Hasan, the deputy commander of the Syrian Democratic Forces, said he has given the Americans a list of his most pressing needs. Atop his list: armored vehicles, heavy weapons like machine guns, as well as rocket launchers and mortars.

"We're creating an army," he said through an interpreter, and have had to rely on smuggling to get weapons.

"You can't run an army on smuggling," he said.

Tribal leaders said in interviews that they also want to see the U.S. do more, both militarily and with humanitarian aid.

"America has the capabilities," said Sheik Abu Khalid as he puffed on a cigarette under the shade of pomegranate and pine trees.