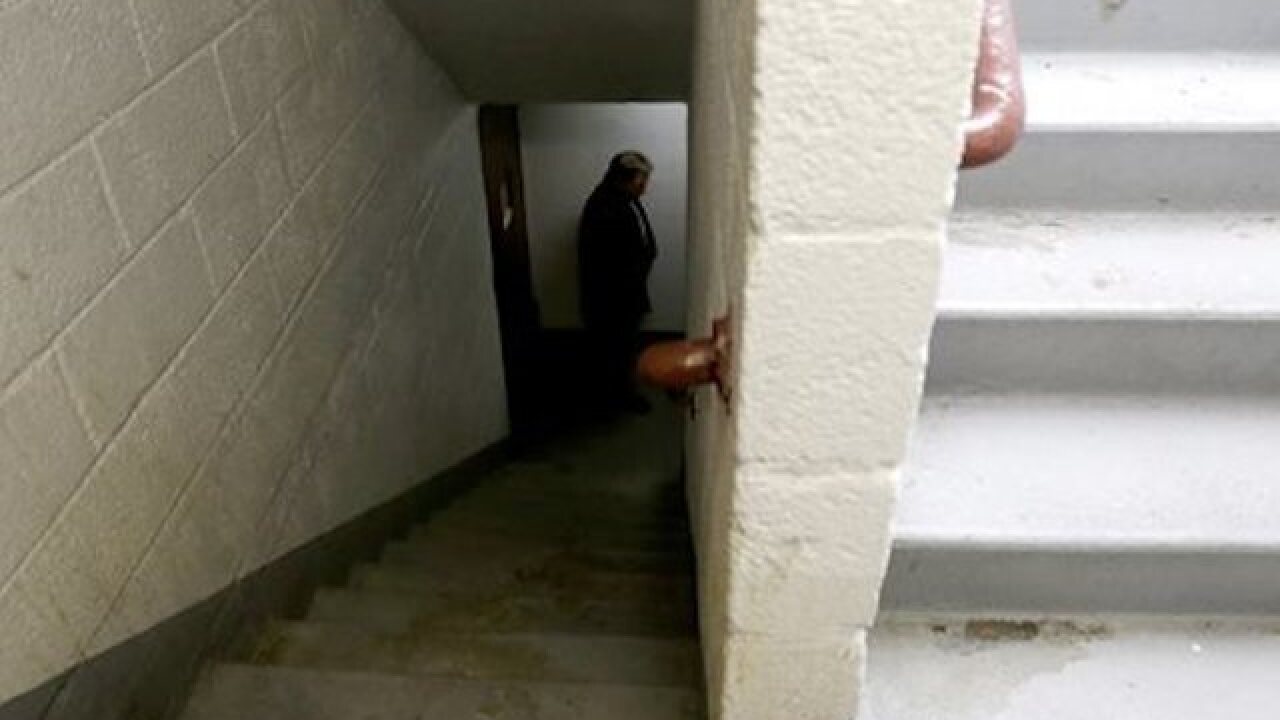 Copyright Associated Press
Julio Cortez
<p>In this Nov. 21, 2014, file photo, a man who identified himself as a detective with the district attorney's office inspects a stairwell at the Louis Pink Houses public housing complex in Brooklyn borough of New York. On Monday, Jan. 25, 2016, opening statements are expected in the trial of rookie New York City Police Officer Peter Liang. Liang is charged with manslaughter for the shooting death of Akai Gurley, as Gurley entered the dark stairwell that Liang and his partner were patrolling in November of 2014. (AP Photo/Julio Cortez, File)</p>

NEW YORK (AP) — A New York police officer recklessly fired his gun into a darkened stairwell, shooting a man, and then "stood there whining and moaning about how he could get fired" instead of helping the dying man, a prosecutor said Monday at the manslaughter trial.

After the 2014 shooting, Officer Peter Liang and his partner walked past Akai Gurley and a friend who was trying to give him CPR, prosecutor Marc Fliedner said in opening statements. Neither officer stopped, he said.

"Peter Liang had no intent to hurt anybody," she said.

Koshetz said Liang initially had no idea the bullet had struck anyone. Once he learned, "he was in a state of shock and was hyperventilating," she said.

Prosecutors agree that the rookie officer didn't mean to shoot and kill Gurley.

The prosecution stands in contrast to other cases around the country in which officers intentionally used deadly force against other unarmed black men but escaped criminal charges.

Liang is expected to take the witness stand.

Advocates for stricter police accountability see the second-degree manslaughter, criminally negligent homicide and other charges brought by Brooklyn District Attorney Kenneth Thompson as justified. They say the case offers a counterpoint to decisions by grand juries declining to indict white police officers in other killings, including those of Eric Garner on Staten Island and Michael Brown in the St. Louis suburb of Ferguson.

The case "is a good sign the DA's office is moving in the right direction," said Lumumba Akinwole-Bandele, senior community organization for the NAACP's Legal Defense and Educational Fund. "But we have a long way to go."

Added Gurley's aunt, Hertencia Peterson: "This is for everyone who has not yet gotten justice."

Chinese-American supporters, however, say Liang has been made a scapegoat for past injustices.

"He just happens to be a very convenient person to go after," said Phil Gim, who's helped organize rallies supporting Liang.

Liang had been an officer for 18 months on the night of Nov. 20, 2014, when he and a partner were patrolling the Brooklyn housing project amid reports of a spike in violent crime.

Liang had his gun drawn as they descended onto an eighth-floor landing in a stairwell where the lights had burned out, prosecutors said. At the same time, the 28-year-old Gurley and a friend he was visiting entered the door into the seventh-floor landing. Liang — his gun in his left hand and a flashlight in his right — fired a shot. The bullet ricocheted and struck Gurley in the chest, who made it down two flights of stairs before collapsing.

According to grand jury testimony by Liang's partner, Liang repeatedly told him, "It went off by accident" and fretted that he would be fired. The two then bickered for at least two minutes about which one should call a supervisor to report the discharge.

After the gun went off, Liang "stood there whining and moaning about how he could get fired," Fliedner, the prosecutor, said Monday.

Prosecutors allege Liang acted recklessly in his handling of his weapon and that he and his partner did nothing to help Gurley, even after they knew he had been shot. Court papers describe the pair walking around the dying victim and down a flight of stairs as the weeping friend tried to give him CPR.

The defense also has suggested that Liang's gun was defective.

The slaying recalled two others by officers patrolling Brooklyn housing projects — the shootings of 19-year-old Timothy Stansbury on a rooftop in 2004 and of 13-year-old Nicholas Heyward Jr. while carrying a toy gun. Neither officer was charged.

Gurley's family has brought a wrongful-death lawsuit on behalf of his estate and his young daughter.

He had planned to move the child and her mother with him to Florida, where his own mother lives, before his life was cut short, his aunt said.

"It's how Akai was killed that's impossible to accept," Peterson said. "We're still in shock."