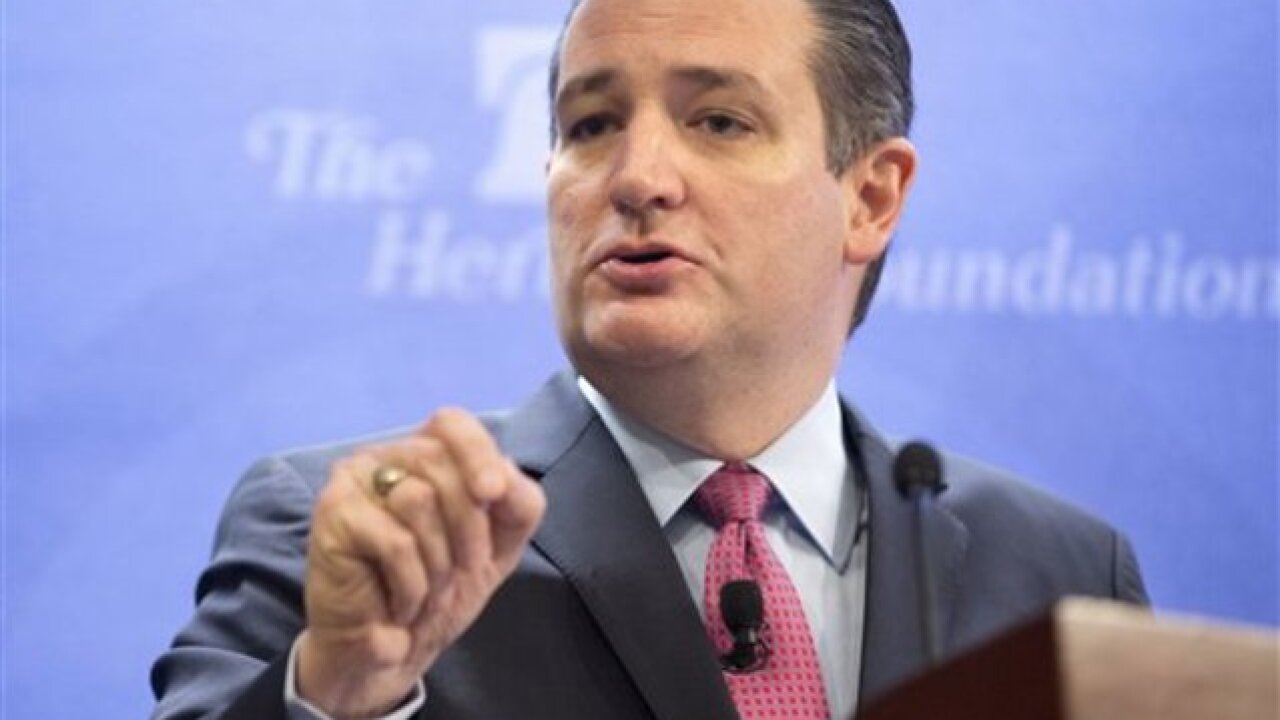 Pablo Martinez Monsivais
<p>FILE - In this Dec. 10, 2015 file photo, Republican presidential candidate Sen. Ted Cruz, R-Texas speaks in Washington. Donald Trump will be standing at center stage, but Cruz will be in the spotlight during Tuesday's Republican presidential debate. The Texas senator is challenging Trump's lead in Iowa, and has the money, campaign infrastructure and conservative appeal to compete deep into the GOP primary season. (AP Photo/Pablo Martinez Monsivais, File)</p>

WASHINGTON (AP) — Donald Trump will be standing at center stage, but Ted Cruz will be in the spotlight at Tuesday night's Republican presidential debate.

The Texas senator is challenging Trump's lead in the kickoff Iowa caucuses, and he has the money, campaign infrastructure and conservative appeal to compete deep into the GOP primary season. Those assets now make him a target for his rivals, most notably Trump and Florida Sen. Marco Rubio.

Trump and Cruz have getting along for months, and that has protected the senator from the harsh criticism the businessman has flung against other opponents. But signs of a split have emerged in recent days, with Cruz appearing to question Trump's judgment at a private fundraiser, according to audio obtained by The New York Times, and Trump calling Cruz "a little bit of a maniac."

"Looks like @tedcruz is getting ready to attack," Trump wrote on Twitter last week. "I am leading by so much he must. I hope so, he will fall like all others. Will be easy!"

Looks like @tedcruz is getting ready to attack. I am leading by so much he must. I hope so, he will fall like all others. Will be easy!

Another intriguing dynamic in Tuesday's prime-time debate in Las Vegas involves Cruz and Rubio. Both are first-term senators and Cuban Americans who see themselves as alternatives to Trump, who has baffled Republican leaders with his political durability.

Cruz and Rubio have been sparring from afar for weeks, particularly over national security, which is now a top campaign issue following the attacks in Paris and San Bernardino, California. Rubio has tried to brand Cruz as an isolationist and has criticized his support for ending the bulk collection of Americans' phone records, saying it weakens the government's ability to identify potential terrorists.

More broadly, Rubio's campaign is eager to cast Cruz, who prides himself on being a conservative "truth-teller," as a politically expedient flip-flopper who is willing to say whatever is necessary to win an election. Rubio's campaign has raised questions about the consistency of Cruz's positions on sending troops to the Middle East, as well as his ambiguousness on whether he would allow immigrants living in the U.S. illegally to stay in the country.

Tuesday's debate will be the first for Republicans in more than a month, and also the first since the attacks in Paris and California. The four previous GOP debates had record viewership, giving the candidates an unparalleled platform to reach voters.

With just six weeks until voting begins, the broad contours of the race remain consistent. Trump still sits atop the GOP field, displaying a talent for connecting with voters frustrated with Washington and on edge about the threat of terrorism. He continues to make controversial comments that might disqualify more traditional candidates, including his recent call for a ban on Muslims entering the U.S.

More experienced politicians are still struggling to break through in the crowded field. Some party leaders fear that unless the party's establishment wing quickly rallies around one candidate, the nomination could go to Trump or Cruz — candidates they see as all but unelectable in a contest with Democratic front-runner Hillary Clinton.

Still, there have been some signs of movement in early voting states since Republicans last took the debate stage.

Cruz's rise in Iowa has been accompanied by a precipitous decline for Ben Carson, the retired neurosurgeon who has struggled with inexperience on national security matters. New Jersey Gov. Chris Christie is enjoying increasing support in New Hampshire, which helped him regain his spot on the main debate stage after being downgraded in November.

"I've been making executive decisions for 13 years and been held accountable for them," Christie said in an interview with The Associated Press. "There's no other way to get ready for the presidency than that; you have to have executive experience to be successful."

For struggling candidates, the debates will be one of their last opportunities to change the trajectory of their campaigns before voting begins in Iowa Feb. 1. The stakes are particularly high for Bush, who was once seen as a front-runner for the Republican nomination and has raised more money than any other candidate.

Bush has scoffed at suggestions that he should drop out of the race before voting begins. But that idea is likely to build if he delivers another lackluster debate performance.