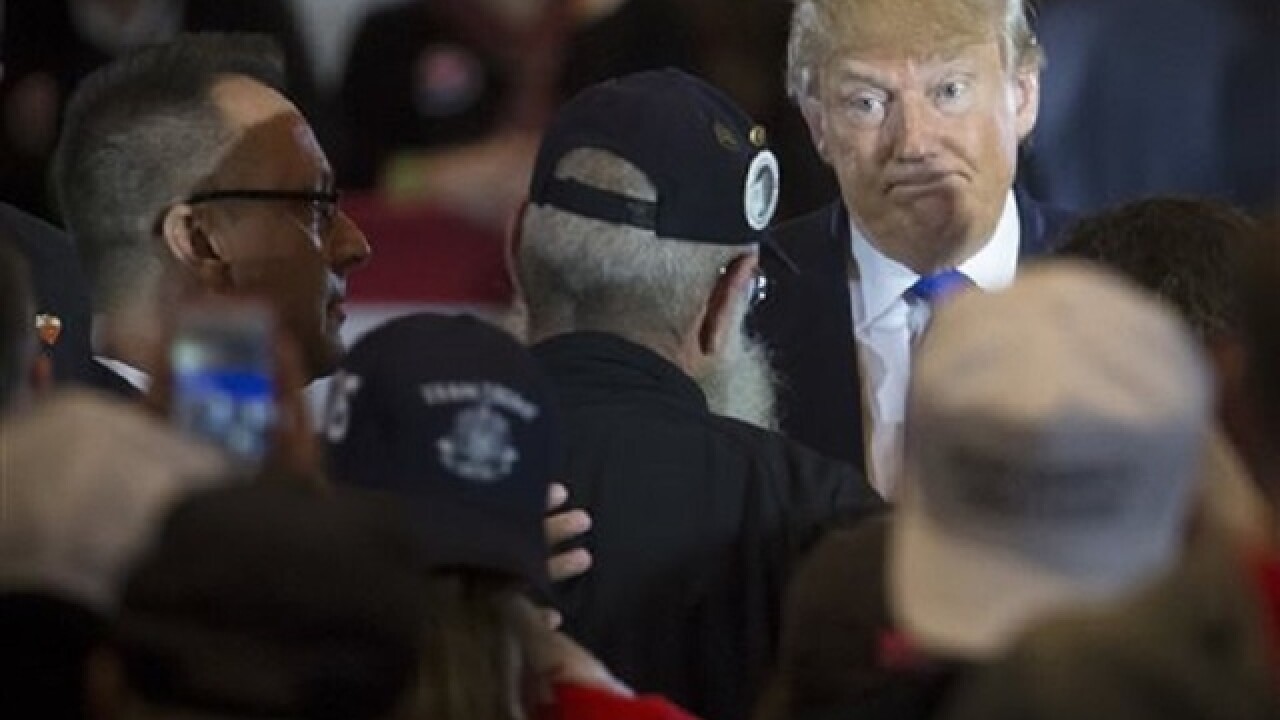 WEST CHESTER, Ohio (AP) — Donald Trump dodged Sunday when asked to clarify controversial remarks about Arizona Sen. John McCain after he was quizzed by a well-known veteran and father of a slain prisoner of war.
During a campaign event near Cincinnati, Keith Maupin, whose son was killed in Iraq after being taken prisoner, asked Trump to clarify comments he made in July about McCain, a former Vietnam War prisoner of war and the GOP's 2008 presidential nominee.
Maupin's question seemed friendly, and he said he wanted to give Trump the opportunity to explain himself.
"You made a comment to John McCain that you don't think that captured soldiers are heroes," Maupin, a Marine Corps veteran, told Trump during the event at a suburban Cincinnati convention center. Maupin's son Matt, a U.S. Army sergeant, went missing from his unit in Iraq in 2004. His remains were recovered in 2008.
Trump had said of McCain in July, while campaigning in Iowa, "He's a war hero because he was captured. I like people who weren't captured."
On Sunday, Trump responded to Maupin: "Oh no, no, no. What I was — I never did that. You know that."
Maupin said, "What I want you to do is just clarify that for me, because I think it's important for all these people here, and for a lot of veterans that's in Ohio. I know what you were doing."
"You know exactly what I was doing," Trump said. "They are heroes. Just so you understand. They're real heroes, OK? You know that."
The exchange came as Trump, the GOP presidential front-runner, vied with Ohio Gov. John Kasich in the GOP primary in Ohio, the most competitive of the winner-take-all-states in Tuesday's voting.
The question-and-answer session ahead of Tuesday's Republican primary was mostly a love fest for Trump. Over the past several days, Trump's rallies have devolved into violence between supporters and protesters, and have recently become heavily secured events teeming with dozens and in some cases hundreds of police.
Although the police presence was obvious in West Chester Sunday, the audience was far friendlier than at the past few Trump stops. Only two protesters sneaked into the ballroom where Trump was speaking: a man holding a Bernie Sanders for president campaign sign and a woman who faced the news media covering the event and tore a Trump sign in half.
The audience booed and jeered the two until they were escorted out.
Later, a woman who said she was from Nicaragua thanked him for charity work he had done in her Central American country. He hugged her and she told him, "I love your blue eyes."
Associated Press 2016