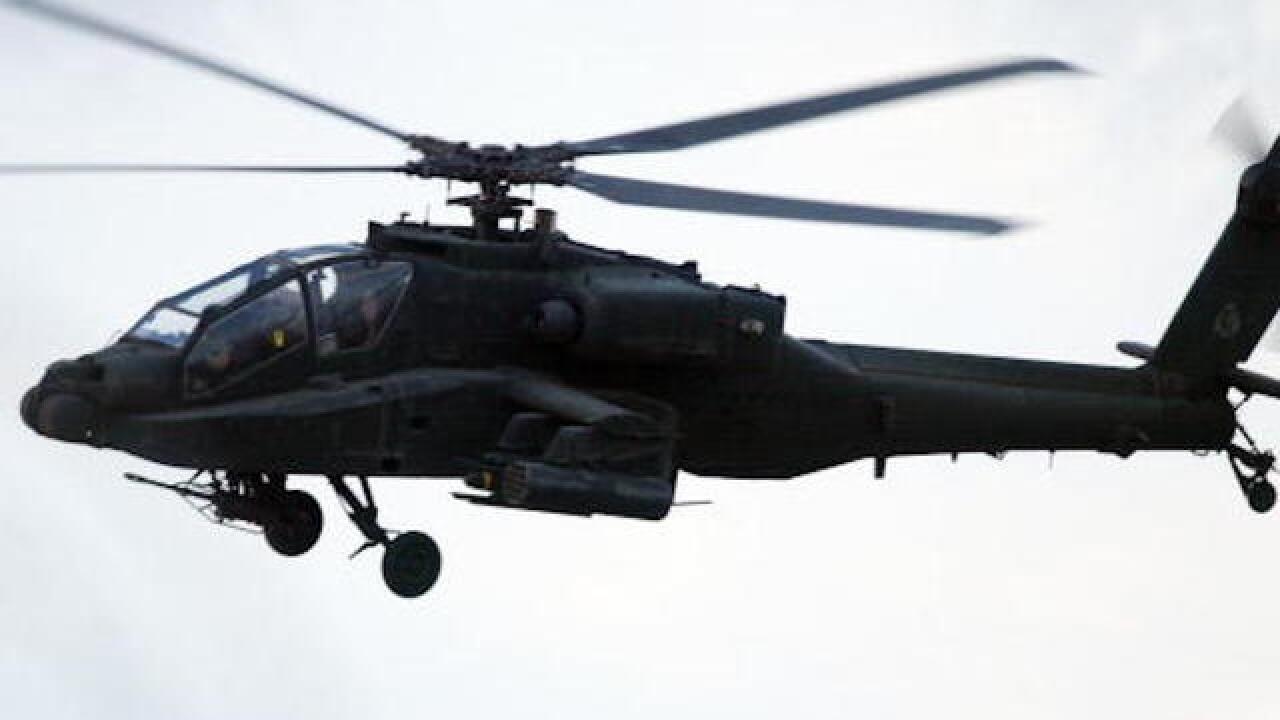 Image copyright 2018 Getty Images. All rights reserved. This material may not be published, broadcast, rewritten, or redistributed.
Joe Raedle
<p>TIKRIT, IRAQ - NOVEMBER 11: A U.S. Army Apache helicopter flies November 11, 2003 in Tikrit, Iraq. With two helicopters shot down in the last two weeks the U.S. Army hopes to capture or kill the people responsible for the attacks.(Photo by Joe Raedle/Getty Images)</p>

Two soldiers were killed in an Army AH-64E Apache helicopter crash at the local training area of their base in Fort Campbell, Kentucky, Friday night, a statement from the 101st Airborne Division said.

The accident happened at about 9:50 p.m. local time Friday evening and involved two soldiers from the 101st Combat Aviation Brigade, the statement said.

The crew was conducting routine training when the accident occurred and there were no other casualties, it said. The cause of the accident is under investigation, the Army said.

The Army is not releasing the names of the deceased pending notification of the next of kin.

"This is a day of sadness for Fort Campbell and the 101st Airborne," said Brig. Gen. Todd Royar, acting senior commander of the 101st Airborne Division and Ft. Campbell. "Our thoughts and prayers are with the Families during this difficult time."

The accident is the latest in a string of military air crashes in the last several days that have killed seven servicemembers:

-- Four Marines were killed in a CH-53E Super Stallion helicopter crash during a routine training mission near El Centro, California, at about 2:35 p.m. PT on Tuesday, according to the 3rd Marine Aircraft Wing.

-- An Air Force Thunderbird pilot was killed when his F-16 Fighting Falcon crashed at Nellis Air Force Base in Nevada during a routine aerial demonstration training flight on Wednesday.

-- At the request of the Djiboutian government, the US military has halted its air operations in the East African country, a critical location in the fight against terrorism, following two accidents involving military aircraft, three defense officials told CNN.

On Tuesday, a Marine Corps Harrier jet crashed at the country's international airport. The pilot was able to eject and was treated at a medical facility but has since been released according to several officials. Later the same day, a Marine Corps CH-53 helicopter sustained "minor damage" while landing in Arta Beach.