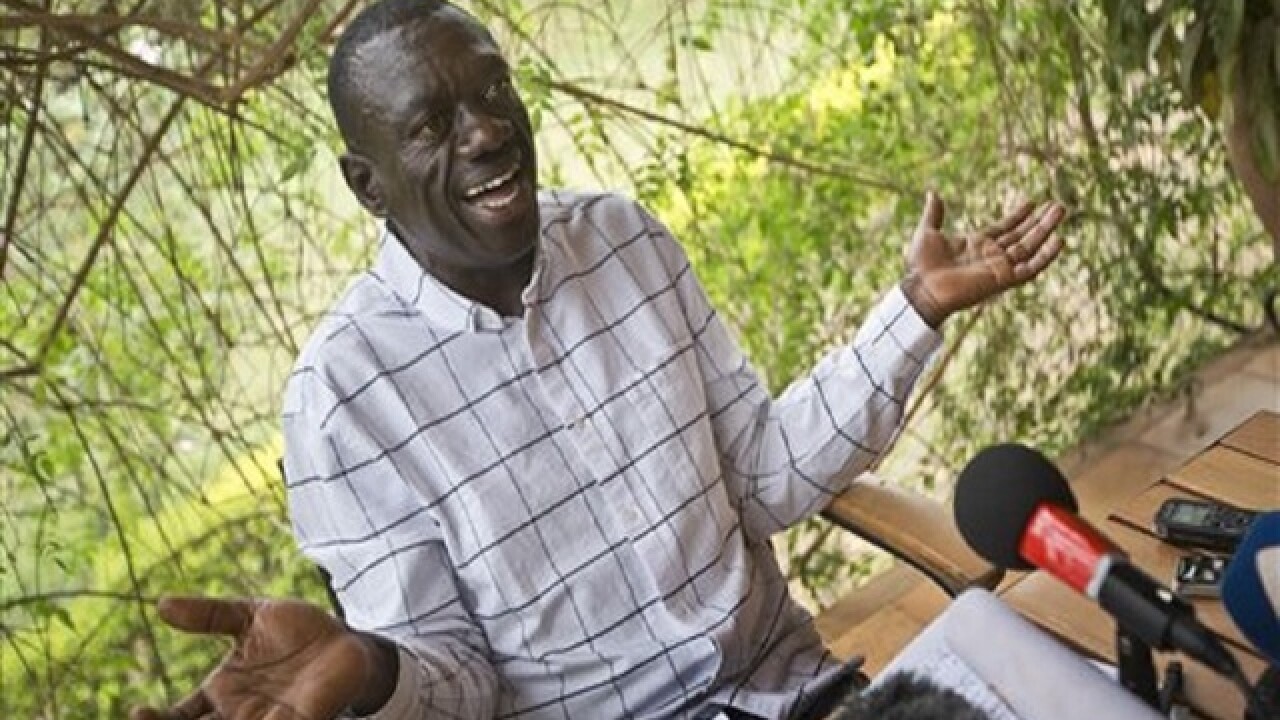 Ben Curtis
<p>Opposition leader and presidential candidate Kizza Besigye speaks to the media while under continued house arrest, at his home in Kasangati, outside the capital Kampala, in Uganda Sunday, Feb. 21, 2016. Besigye urged his supporters to protest his continued detention at home following the country's disputed presidential election and rejected the official results, alleging massive vote rigging. (AP Photo/Ben Curtis)</p>

By: Associated Press
Posted at 3:58 AM, Feb 22, 2016
KAMPALA, Uganda (AP) — Uganda's main opposition leader was arrested Monday as he tried to leave his home near the capital, a day after he urged his supporters to protest his house arrest.
Associated Press journalists saw Kizza Besigye being thrown into the back of a blacked-out van and whisked away to an unknown location. A plain-clothes security agent sprayed pepper spray into the face of a journalist.
Besigye had planned to visit the election commission's headquarters in Kampala Monday to get detailed copies of the results from the country's presidential election. He has also been calling for an independent audit that includes members from the international community.
The election commission announced Saturday that long-time President Yoweri Museveni won the vote with more than 60 percent of the ballots, while Besigye got 35 percent.
Besigye, who has been arrested multiple times in the past week and has been detained at his house since Friday, has alleged massive vote rigging and called the results fraudulent. He has said he may petition the country's supreme court and needs to gather evidence.
On Friday, his supporters took to the streets to protest. Riot police lobbed tear gas and stun grenades at them and fired warning shots from automatic rifles, then chased them through narrow alleys, arresting some.
Besigye later urged his supporters to "use the popular numbers that we have to make sure that the gunmen do not do what they are doing."
"If the regime continues to restrict me, to detain me in my home ... I call upon all of you citizens to protest this," the 59-year-old doctor told reporters Sunday. "At the very minimum let us also stop them from moving," he said, referring to the security forces.
Armed police and plainclothes security officers had been surrounding Besigye's house since last week, allegedly to stop him from leading protests against Museveni's win that could turn violent.
The whereabouts of Besigye after his arrest Monday were not known, said Ssemujju Nganda, a spokesman for his Forum for Democratic Change party.
Museveni on Sunday denied the allegations of vote fraud and vowed to "use both soft and hard means to guard the peace in Uganda." Museveni said there was a threat to burn down Kampala by young people directed by leaders he described as "criminal politicians."
Voting on Thursday was marred by lengthy delays in the delivery of polling materials, some incidents of violence as well as a government shutdown of social media sites like Twitter and Facebook, which remained inaccessible until Saturday. Most of the delays happened in areas seen as opposition strongholds, including Kampala.
The election was marked by an "intimidating atmosphere, which was mainly created by state actors," and the election commission lacks independence and transparency, the European Union observer mission said in its preliminary report.
The 71-year-old Museveni took power by force in 1986 and pulled Uganda out of years of chaos after a guerrilla war. He is a key U.S. ally on security matters, especially in Somalia. Critics fear he may want to rule for life and they accuse him of using security forces to intimidate the opposition.
Besigye was Museveni personal physician during the 1981 to 1986 bush war between Museveni and former President Milton Obote. He also served as deputy interior minister in his first Cabinet, but broke with the president in 1999, saying he was no longer a democrat.
Associated Press 2016