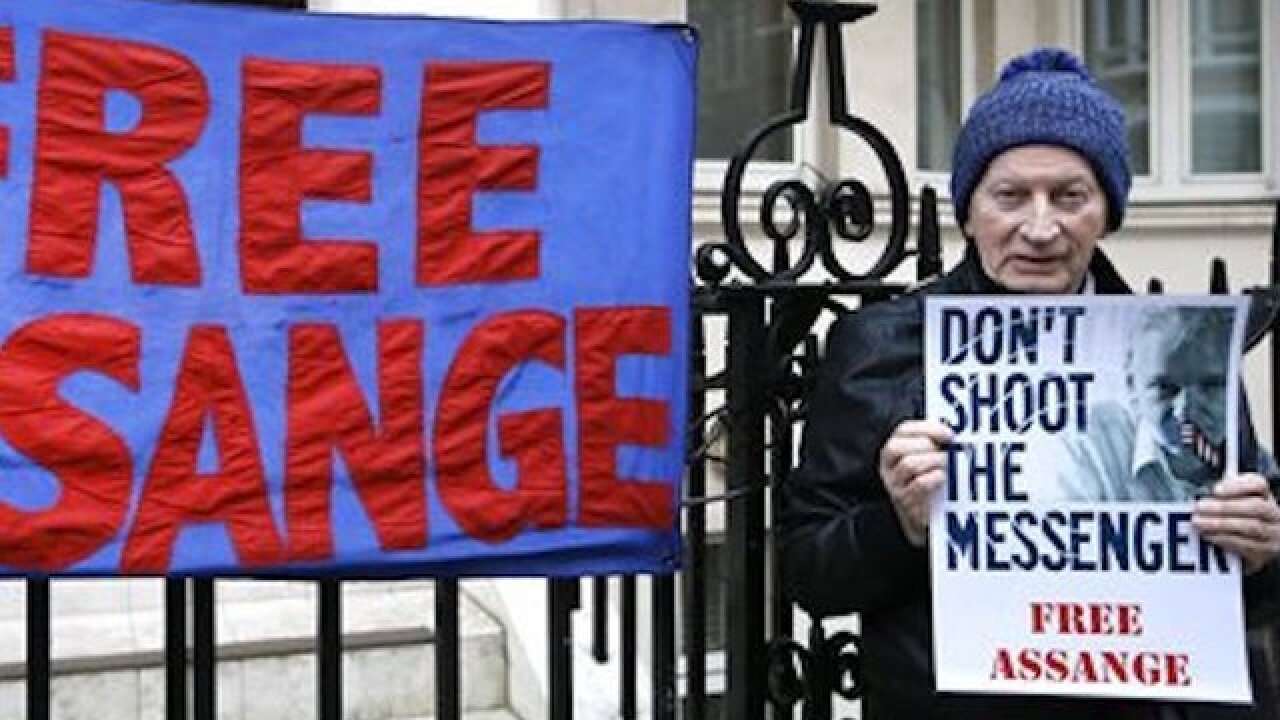 LONDON (AP) — A little-known United Nations human rights panel has sided with WikiLeaks founder Julian Assange in his long-running battle with Swedish and British authorities, saying he should be allowed to walk free from his embassy hideaway and compensated for the years he has lost.

The U.N. Working Group on Arbitrary Detention, which falls under the offices of the U.N. human rights chief, said Assange has been "arbitrarily detained" by Britain and Sweden since December 2010, when he was first sought for questioning on allegations of sexual misconduct.

The panel's recommendation was immediately rejected by Swedish and British officials who said Assange's legal situation is unchanged. He remains in the Embassy of Ecuador in London, where he has been holed up for more than three and a half years.

No charges have been filed against Assange in Sweden, but Swedish prosecutors want to question him over allegations of rape stemming from a working visit he made to the country in 2010 when WikiLeaks was attracting international attention for its secret-spilling. He is also sought by Britain for jumping bail.

Assange has consistently denied the allegations but has refused to return to Sweden to meet with prosecutors and eventually took the decision to seek refuge in the Ecuadorean embassy in London, where he has lived since June 2012.

Addressing supporters from the embassy balcony, Assange called the finding "a historic victory."

Speaking earlier by video link from the embassy, he told a news conference the finding that he has been unlawfully detained is a significant victory that completely vindicates him.

"The lawfulness of my detention or otherwise is now a matter of settled law," Assange said.

But the lawyer for the Swedish woman who has accused Assange of rape said the group's finding was "insulting and offensive" toward her client and the rights of all crime victims.

In a statement, Elisabeth Massi Fritz said Assange should "pack his bags, leave the embassy and start cooperating with the police and the prosecutor."

She said it was "important to remember that Assange had violated the law and is willfully defying the courts' decisions."

British and Swedish officials maintain the panel's finding has no legal force, but it represents a public relations victory for Assange, who argues that the allegations against him are part of a plot to send him to the United States to face more possible charges related to WikiLeaks' release of classified documents.

It is not clear if U.S. judicial officials are seeking Assange's arrest on U.S. charges. However, Sweden has not received any extradition request from American authorities, said Anders Ronquist, legal chief at Sweden's foreign ministry.

Ronquist said Assange voluntarily entered the embassy, and "is not being deprived of his liberty there due to any decision or action taken by the Swedish authorities."

Britain's Foreign Office said in a statement it would formally contest the panel's opinion.

"This changes nothing. We completely reject any claim that Julian Assange is a victim of arbitrary detention," the Foreign Office said in a statement. "Julian Assange has never been arbitrarily detained by the U.K. The opinion of the U.N. Working Group ignores the facts and the well-recognized protections of the British legal system."

It countered that Assange was "voluntarily avoiding lawful arrest by choosing to remain in the Ecuadorean embassy."

Karin Rosander, spokeswoman for the Swedish Prosecution Authority, said that under Swedish law the panel's conclusion will have no "formal impact."

The decision of the five-person panel was not unanimous: Vladimir Tochilovsky, a Ukrainian member, disagreed, saying he did not believe Assange had been detained. The fifth member of the panel recused herself because she is Australian, as is Assange.

The panel criticized a "disproportionate" reaction by Swedish prosecutors in issuing a European arrest warrant rather than seeking to question Assange using bilateral agreements with Britain, and insisted that the Swedish prosecutor refused to consider other ways of interviewing him compatible with his right to asylum — which it said was not properly respected.

It noted that Assange was never formally charged in Sweden — only placed under preliminary investigation.

"The Working Group on Arbitrary Detention considers that the various forms of deprivation of liberty to which Julian Assange has been subjected constitute a form of arbitrary detention," said panel chairman Seong-Phil Hong in a statement.

Citing the International Covenant on Civil and Political Rights that has 168 state parties including both Sweden and Britain, the panel said "the adequate remedy would be to ensure the right of free movement of Mr. Assange and accord him an enforceable right to compensation."

The 44-year-old computer hacker's lawyers said he must be allowed to walk free immediately and given protection from possible extradition to the United States.

Lawyer Melinda Taylor said the finding shows that Assange has been subjected to mental torture throughout his long ordeal and now faces round-the-clock overt and covert surveillance while seeking safety at the embassy.

The case has been complicated by uncertainty surrounding Assange's legal status in the United States. The U.S. government has not revealed whether he has been indicted — grand jury proceedings are secret there — but has indicated that sensitive investigations into Assange and WikiLeaks have been made.

The working group said Assange could face "refoulement" to the United States — being handed over to a country where he could face violence or prison. The U.N. upholds the principle of non-refoulement prohibiting that practice.

He said the panel's decision "shows clearly that we are talking about political persecution."