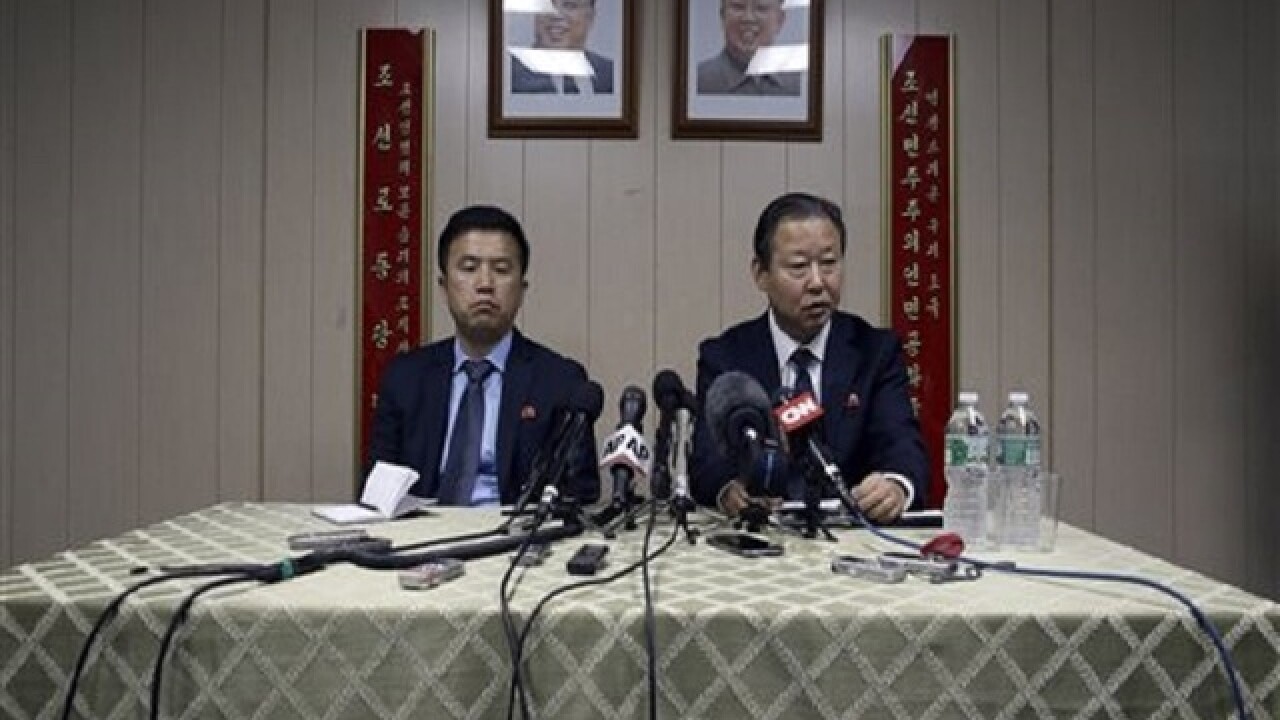 UNITED NATIONS (AP) — The U.N. Security Council votes Wednesday on a resolution that would impose the toughest sanctions on North Korea in two decades.
Angola's U.N. Ambassador Ismael Gaspar Martins, the current council president, said Tuesday that hopefully the resolution will be adopted "by consensus."
The U.S. and North Korea's traditional ally China spent seven weeks negotiating the new sanctions — which include mandatory inspections of cargo leaving and entering North Korea by sea or air — in response to Pyongyang's latest nuclear test and rocket launch. Both are in defiance of previous council resolutions.
But Russia, which received the new draft Thursday along with other council members, asked for time to study the lengthy text, and suggested changes. The U.S. wanted a vote Tuesday afternoon but Russia delayed it to Wednesday morning.
The U.S., its Western allies and Japan pressed for new sanctions that went beyond the North's nuclear and missile programs but China, Pyongyang's neighbor, was reluctant to impose measures that could threaten the stability of North Korea and cause its economy to collapse.
The final draft, obtained by The Associated Press, would eliminate loopholes in previous sanctions resolutions and impose new ones. But it stresses that the new measures are not intended to have "adverse humanitarian consequences" for civilians, the majority who face economic hardships and food shortages.
White House spokesman Josh Earnest said Tuesday that the U.S. administration knows the North Korean people "have suffered for far too long" because of decisions from their government. "And that's why this sanctions regime is targeted more specifically at the North Korean elite."
For the first time, the draft resolution would require the 192 other U.N. member states to inspect all cargo from North Korea or heading to the country for illicit goods, ban any sale or transfer of small arms and light weapons to Pyongyang, and require all countries to expel diplomats from the North who engage in "illicit activities."
It would also for the first time impose significant sanctions on broad sections of the North Korean economy.
The draft resolution would ban the export of coal, iron and iron ore that is being used to fund North Korea's nuclear or ballistic missile programs — and it would prohibit all exports of gold, titanium ore, vanadium ore and rare earth minerals. It would also ban aviation fuel exports to the country, including "kerosene-type rocket fuel."
Earnest said North Korea uses revenue from sectors like coal, iron, gold, titanium and rare earth materials to bankroll its nuclear and missile programs, and "the North Korean ruling elite" also benefits from those sectors.
In the financial and banking sector, countries would be required to freeze the assets of companies and other entities linked to Pyongyang's nuclear and missile programs. Under a previous resolution, they were encouraged to do so.
The draft would also prohibit all countries from opening new branches, subsidiaries and representative offices of North Korean banks, and ban financial institutions from establishing new joint ventures or establishing or maintaining correspondent relationships with these banks. It would also order countries to close all North Korean banks and terminate all banking relationships within 90 days.
North Korea is already subject to four rounds of U.N. sanctions imposed since the country's first nuclear test in 2006.
Under those resolutions, it is banned from importing or exporting nuclear or missile items and technology as well as luxury goods.
The new draft would expand the list of banned items — adding luxury items such as expensive watches, snowmobiles, recreational water vehicles and lead crystal.
It would also add 16 individuals, 12 "entities" including the National Aerospace Development Agency which was responsible for February's rocket launch, and 31 ships owned by the North Korean shipping firm Ocean Maritime Management Company to the sanctions blacklist which requires the freezing of assets, and in the case of individuals a travel ban as well.
In addition to the mandatory inspection of cargo heading to or from North Korea by air or sea, the draft resolution would ban Pyongyang from chartering vessels or aircraft, and call on countries to "de-register" any vessel owned, operated or crewed by the North.
While focusing on new sanctions, the draft resolution also demands that North Korea immediately comply with the Security Council's previous bans on ballistic missile launches, nuclear tests "or any other provocation." It also reaffirms the council's decisions that the North abandon all nuclear weapons and other weapons of mass destruction, and its ballistic missile program.
As with previous resolutions, the test will be whether U.N. member states enforce the sanctions. A U.N. panel of experts monitoring the sanctions has repeatedly pointed out that enforcement in a significant number of cases has been weak.
North Korea has ignored many demands, and tried to circumvent others.
It started off the new year with what it claims was its first hydrogen bomb test on Jan. 6 and followed up with the launch of a satellite on a rocket on Feb. 7. It was condemned by much of the world as a test of banned missile technology.
The draft resolution reiterates "the importance of maintaining peace and stability on the Korean peninsula and in northeast Asia at large, and expresses its commitment to a peaceful, diplomatic and political solution to the situation." It calls for a resumption of six-party talks leading to the goal of "the verifiable denuclearization of the Korean peninsula in a peaceful manner." North Korea withdrew from the talks in 2008.
It also expresses the council's "determination to take further significant measures" in the event of another North Korean nuclear test or launch.
Associated Press 2016