US accuses Iran of testing rockets near warships 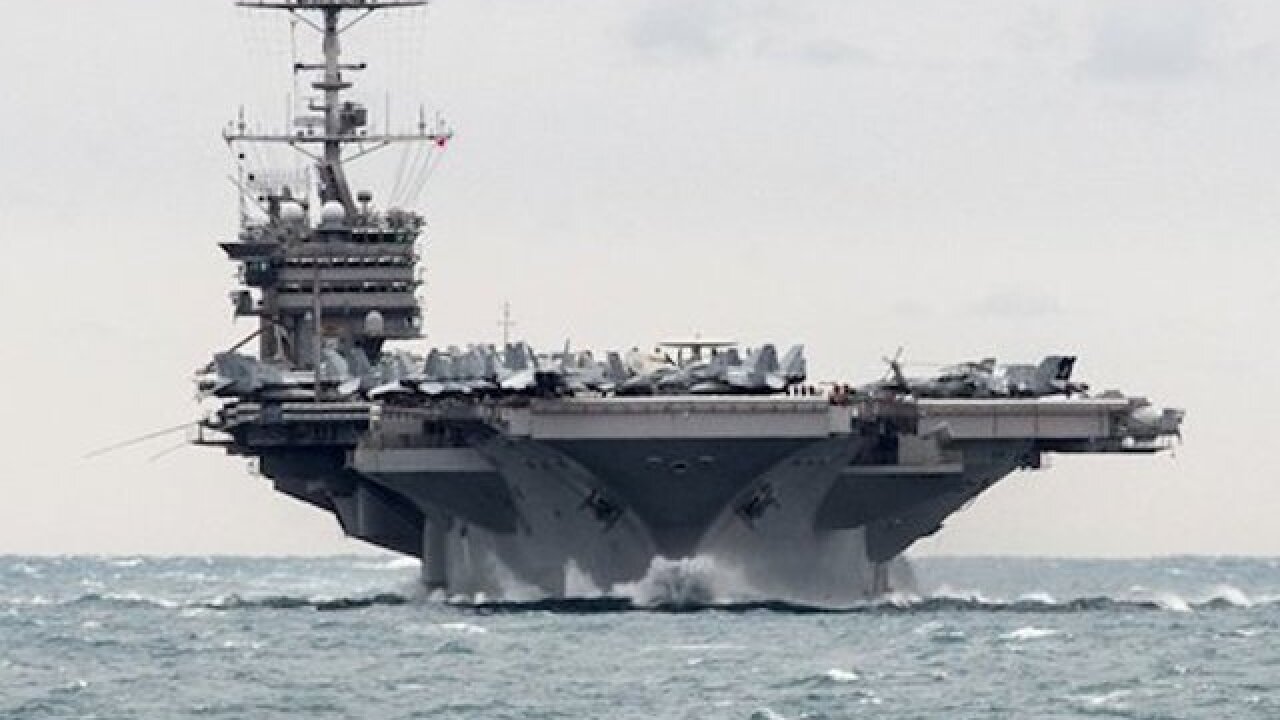 The vital strait, a narrow waterway between Iran and Oman that is the route for nearly a third of all oil traded by sea, is crucial for ships taking part in the war against the Islamic State group in Iraq and Syria. In the past, Iran has threatened to block the strait, which lies at the entrance of the Persian Gulf.

While the United States has complained previously about other Iranian war games and maneuvers there, Saturday's incident comes after a series of weapons tests and other moves by the Islamic Republic following the nuclear deal.

Iranian media and officials did not immediately discuss the tests Wednesday.

Cmdr. Kyle Raines, a U.S. Central Command spokesman, said in a statement that Iranian Revolutionary Guard naval vessels fired "several unguided rockets" about 1,370 meters (1,500 yards) from the USS Harry S. Truman aircraft carrier, the USS Bulkeley destroyer and a French frigate, the FS Provence. Raines said commercial sea traffic also was nearby, though the missiles weren't fired in the direction of any ships.

Raines said the Iranian vessels announced over maritime radio that they'd carry out a live fire exercise only 23 minutes beforehand.

A French military official, speaking to The Associated Press on condition of anonymity as he was not authorized to publicly named, confirmed the rocket fire took place Saturday. However, the official said the French military did not consider it to be a threatening event as the rocket fire clearly wasn't directed toward the Western fleet.

The French frigate is now escorting the French aircraft carrier Charles de Gaulle, which is launching airstrikes against the Islamic State group.

The Strait of Hormuz is only about 33 kilometers (21 miles) wide at its narrowest point between Iran and Oman. Ships traversing the chokepoint have even less room to maneuver. The shipping lane in either direction is only 2 miles (3.22 kilometers) wide, with a 2-mile (3.22-kilometer) buffer zone between them.

The U.S. Navy's 5th Fleet is based in nearby Bahrain, on the southern coast of the Gulf. It conducts anti-piracy patrols in the greater Gulf and serves as a regional counterbalance to Iran.

While the U.S. didn't retaliate to Saturday's rocket test, the Strait of Hormuz has been the scene of a battle between the two countries' navies. On April 18, 1988, the U.S. attacked two Iranian oil rigs and sunk or damaged six of its vessels, including two naval frigates, in Operation Praying Mantis. That came after the near-sinking of the missile frigate USS Samuel B. Roberts by an Iranian mine.

A few months later, in July 1988, the USS Vincennes in the strait mistook an Iran Air flight heading to Dubai for an attacking fighter jet, shooting down the plane and killing all 290 passengers and crew onboard. The shoot-down of the jet came shortly after the U.S. vessel reported coming under fire from Iranian speedboats.

Saturday's rocket fire comes after Iran and world powers led by the U.S. agreed to a landmark nuclear deal to limit the Islamic Republic's enrichment of uranium in exchange for lifting economic sanctions. While heralded by moderates in Iran, hard-liners have criticized the deal.

In the time since, Iran has conducted missile tests criticized by the U.S., as well as aired footage on state television of an underground missile base. Iran also sank a replica of a U.S. aircraft carrier in February near the strait. It seized a Marshall Islands-flagged cargo ship and later released it in May after earlier surrounding U.S.-flagged cargo ship transiting the strait.