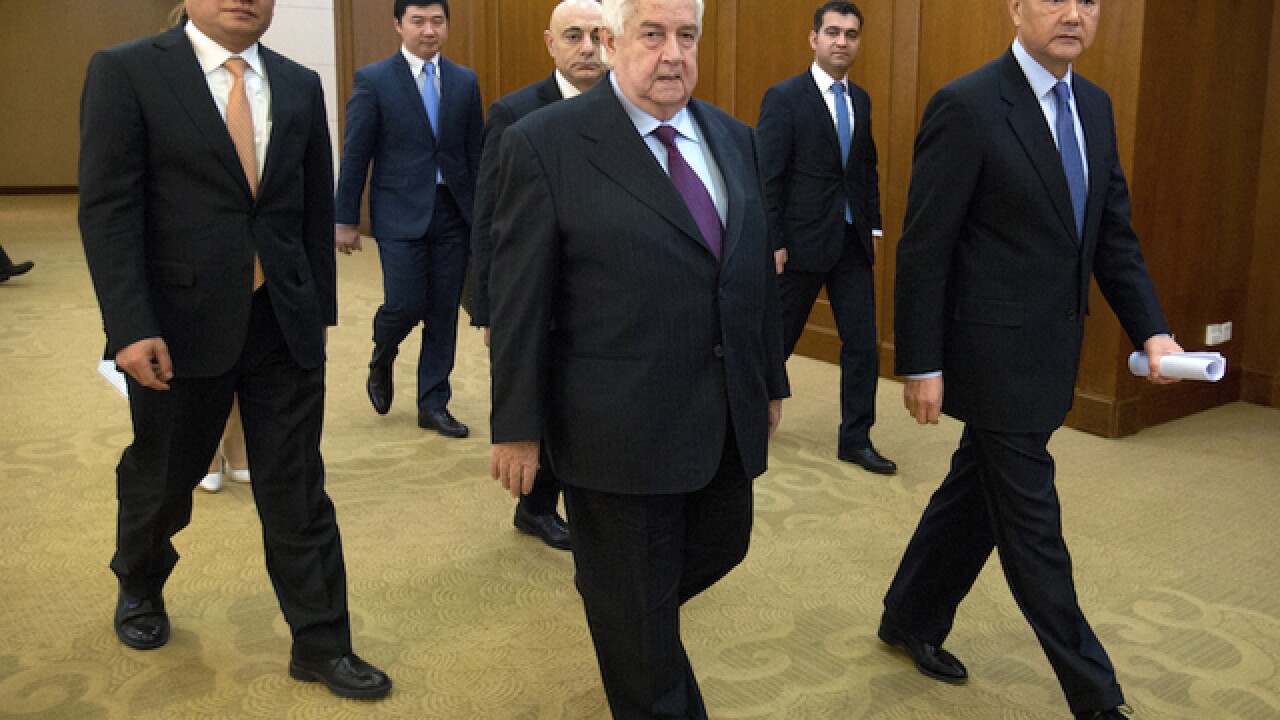 A U.S.-backed coalition of rebels in Syria — including Syrian Kurdish, Arab and Christian groups — captured several areas in the country's north on Thursday from the Islamic State extremists, an activist group and a rebel spokesman said.

The advance of the coalition, known as Syria Democratic Forces, is part of the recent rebel push to take control of a major dam and cut supply lines between the IS group's strongholds in northern Syria.

The SDF offensive started Wednesday with a push south of the Turkey-Syria border town of Kobani, according to a rebel spokesman, Col. Talal Sillu. On Thursday, coalition fighters advanced eight kilometers (five miles), inching closer to their objective — the Tishrin Dam on the Euphrates River that supplies much of northern Syria with electricity.

"The situation on the ground is excellent," said Sillu. The rebels are also trying to cut the supply lines between the Islamic State's de-facto capital of Raqqa and the group's stronghold of Manbij. Several villages, farms and weapons were taken in battles with IS, the spokesman said, adding that at least 14 IS fighters have been killed since Wednesday.

The Britain-based Syrian Observatory for Human Rights reported that SDF captured several villages in the area and that the fighters were advancing under cover of airstrikes by the U.S.-led coalition.

The SDF, dominated by the main Kurdish militia in Syria known as YPG, or People's Protection Units, has become a main force in fighting IS, capturing dozens of villages in northern Syria over the past weeks.

However, in eastern Syria, IS has seized a district previously held by Syrian government forces in the city of Deir el-Zour after heavy clashes with troops holed up inside, the extremist group and Syrian opposition activists said Thursday. The seizure expands the IS presence in the contested eastern region.

The agency said at least 38 Syrian troops were killed in the attack during which IS seized large amounts of ammunition and an armed personnel carrier from the government troops. The Observatory also reported the IS capture of the district, saying at least 26 soldiers were killed. The discrepancy in the casualty figures could not immediately be reconciled.

The city of Deir el-Zour is held mostly by IS but Syrian troops control a few districts inside it and the airport on its outskirts. IS fighters have in recent weeks launched several attacks in attempts to capture government-held parts of the city and the nearby airport, without success.

The Observatory also reported that in the "coming hours," IS was to start evacuating its wounded fighters from Damascus' southern suburb of Qadam to areas held by the extremists in northern Syria under a newly brokered deal.

The activist group said that in the second phase, families of IS fighters will be evacuated and then the fighters themselves will leave Qadam, the nearby neighborhood of Hajar Aswad and the Palestinian refugee camp of Yarmouk.

The Lebanon-based Al-Mayadeen TV said the evacuation would begin on Saturday, adding the thousands of fighters and their families will be given safe passage to Raqqa and the extremists' stronghold of Marei in the northern province of Aleppo.

A Palestinian official in Damascus confirmed the deal, but stressed that Palestinian factions were not part of it. The official, who spoke on condition of anonymity because of the secret negotiations over the deal, said it was struck between representatives of the Syrian state and some rebel factions — presumably negotiating on behalf of the Islamic State.

The official did not elaborate.

In April, IS militants infiltrated the Yarmouk camp in what was their deepest foray into Damascus, the seat of President Bashar Assad's power. The latest deal and the IS evacuation could pave the way for other reconciliation gestures between the government and rebel factions based in the southern edges of the Syrian capital.

The Syrian civil war has killed more than a quarter of a million people since it started nearly five years ago, and displaced half the Middle Eastern country's pre-war population of 23 million.

Meanwhile, Syria's foreign minister said Thursday that his government is ready to take part in U.N.-organized peace talks in January in Geneva and that he hopes the dialogue will help the country find a solution to the crisis.

The U.N. Security Council last Friday unanimously approved a resolution endorsing a peace process for Syria, including a cease-fire and talks between the Syrian government and the opposition.

"Syria is ready to participate in the Syrian-Syrian Dialogue in Geneva without any foreign interference," Foreign Minister Walid al-Moallem told reporters after meeting his Chinese counterpart in Beijing.

But al-Moallem also indicated Damascus could opt out of the talks if it was dissatisfied with participants from the opposition ranks. The government and its Russian allies have said there was no room at the negotiating table for "terrorists."

"Our delegation will be ready as soon as we receive a list of the opposition delegation," al-Moallem said.