Debris from same type of plane as MH370 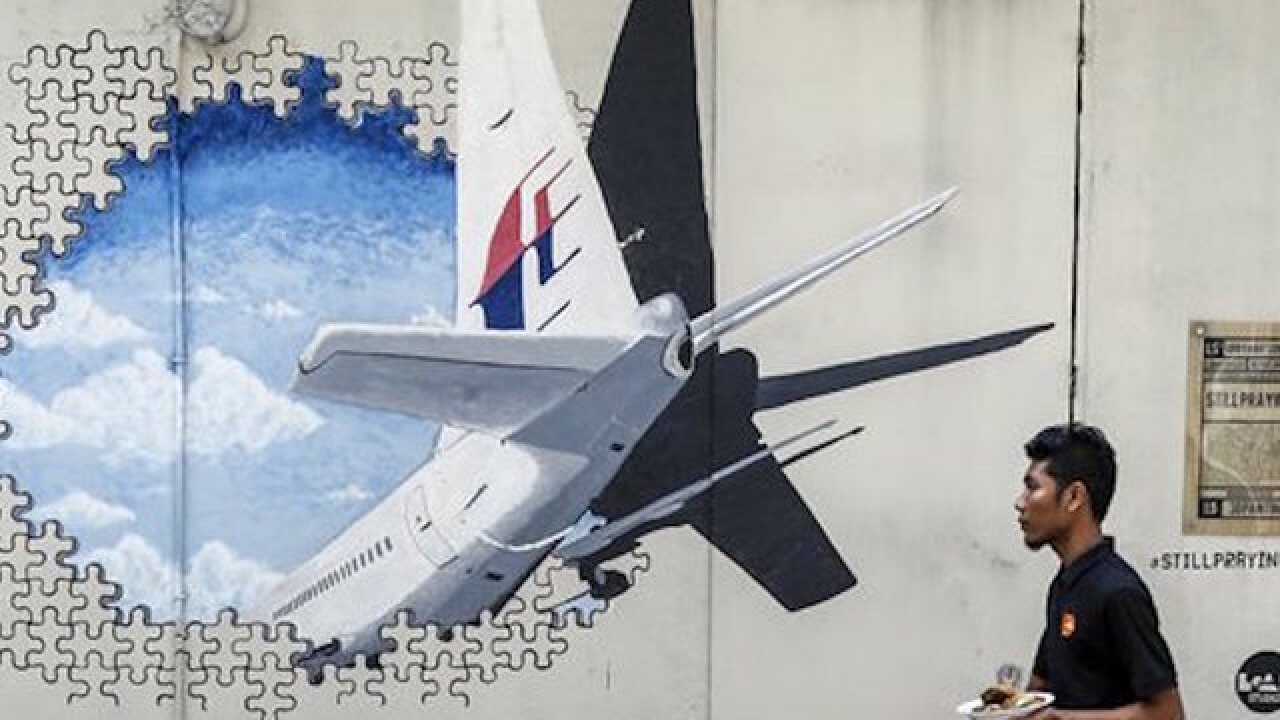 Copyright Associated Press
Joshua Paul
<p>FILE - In this Feb. 23, 2016 file photo, a waiter walks past a mural of Malaysia Airlines Flight 370, in Shah Alam outside Kuala Lumpur, Malaysia. Debris that washed up in Mozambique has been tentatively identified as a part from the same type of aircraft as the missing Malaysia Airlines Flight 370, a U.S. official said Wednesday, March 2, 2016. (AP Photo/Joshua Paul, Fie)</p>

WASHINGTON (AP) — Debris that washed up in Mozambique has been tentatively identified as a part from the same type of aircraft as the missing Malaysia Airlines Flight 370, a U.S. official said Wednesday.

Photos of the debris discovered over the weekend appear to show the fixed leading edge of the right-hand tail section of a Boeing 777, said the official, who spoke on condition of anonymity because he wasn't authorized to speak publicly. Flight 370, which disappeared two years ago with 239 people aboard, is the only known missing 777.

People who have handled the part, called a horizontal stabilizer, say it appears to be made of fiberglass composite on the outside, with aluminum honeycombing on the inside, the official said.

The Australian Transport Safety Bureau, which is running the search for the plane in remote waters off Australia's west coast, said the part was expected to be transported to Australia for examination.

Malaysian transport minister Liow Tiong Lai also confirmed in tweets about the discovery that it appears the debris may have come from the missing plane.

"Based on early reports, high possibility debris found in Mozambique belongs to a B777," Liow said in a series of tweets.

"It is yet to be confirmed & verified. @dca_malaysia working w Australian counterparts to retrieve the debris." He urged "everyone to avoid undue speculation as we are not able to conclude that the debris belongs to #mh370 at this time."

Australian officials have seen photographs of the debris and have been in communication with Blaine Gibson, the American man who found the part, said Dan O'Malley, a spokesman for the Australian Transport Safety Bureau.

"We're aware of these reports that debris has been found in Mozambique," O'Malley said. "We're working with officials in Mozambique and Malaysia to investigate."

Australia will work with Malaysian investigators to examine the object once it arrives in Australia, he said. The ATSB hasn't made any determinations yet about the potential origins of the debris.

"We have to wait until we have the actual debris examined," O'Malley said. "We're not going to draw conclusions from the photos."

Flight 370 disappeared on March 8, 2014, while flying from Kuala Lumpur to Beijing with 239 people on board. Radar data show the plane turned sharply around as it approached Vietnamese airspace, and then flew back across the Malay Peninsula until contact was lost off the coast of Thailand.

Authorities who scrutinized data exchanged between the plane's engine and a satellite determined that the jetliner continued on a straight path across the Indian Ocean, leading them to believe that the plane flew on autopilot for hours before running out of fuel and crashing into the water.

Despite an exhaustive search of the ocean west of Australia, where the plane is believed to have crashed, the only confirmed trace of the aircraft has been a wing part known as flaperon that washed ashore last July on the French island of Reunion off the east coast of Africa — about 2,300 miles (3,700 kilometers) from the current search area.

The flaperon bore a stenciled internal marking "657 BB," which is consistent with a flaperon from a Boeing 777.

Nothing of the passengers, their luggage or even things designed to float, such as life jackets, has been discovered despite the largest and most expensive search in aviation history.

Australia has led the multinational search effort, which also includes the Malaysian and Chinese governments.

The discovery in Mozambique is unlikely at this stage to impact the underwater search for the plane, taking place thousands of miles to the east, O'Malley said.

Authorities have long predicted that any debris from the plane that isn't on the ocean floor would eventually be carried by currents to the east coast of Africa.

Australia's Transport Minister Darren Chester said in a statement Thursday that the location of the debris in Mozambique matches the ATSB's drift modeling and would therefore reaffirm that search crews are looking in the right part of the Indian Ocean for the wreckage.

With authorities unable to find the plane and its "black box" flight data and cockpit voice recorders, investigators are no closer than they were two years ago to discovering the cause of the aircraft's disappearance. There are many theories, including that a rogue pilot deliberately caused the $250 million jet to vanish, but little hard evidence.

With the search tentatively scheduled to wrap up later this year, Flight 370 may become one of aviation's great unsolved mysteries.

In the aftermath of the plane's disappearance, the airline industry and aviation authorities around the world pledged to find ways to better track airliners, especially over expanses of ocean where there's no radar coverage.