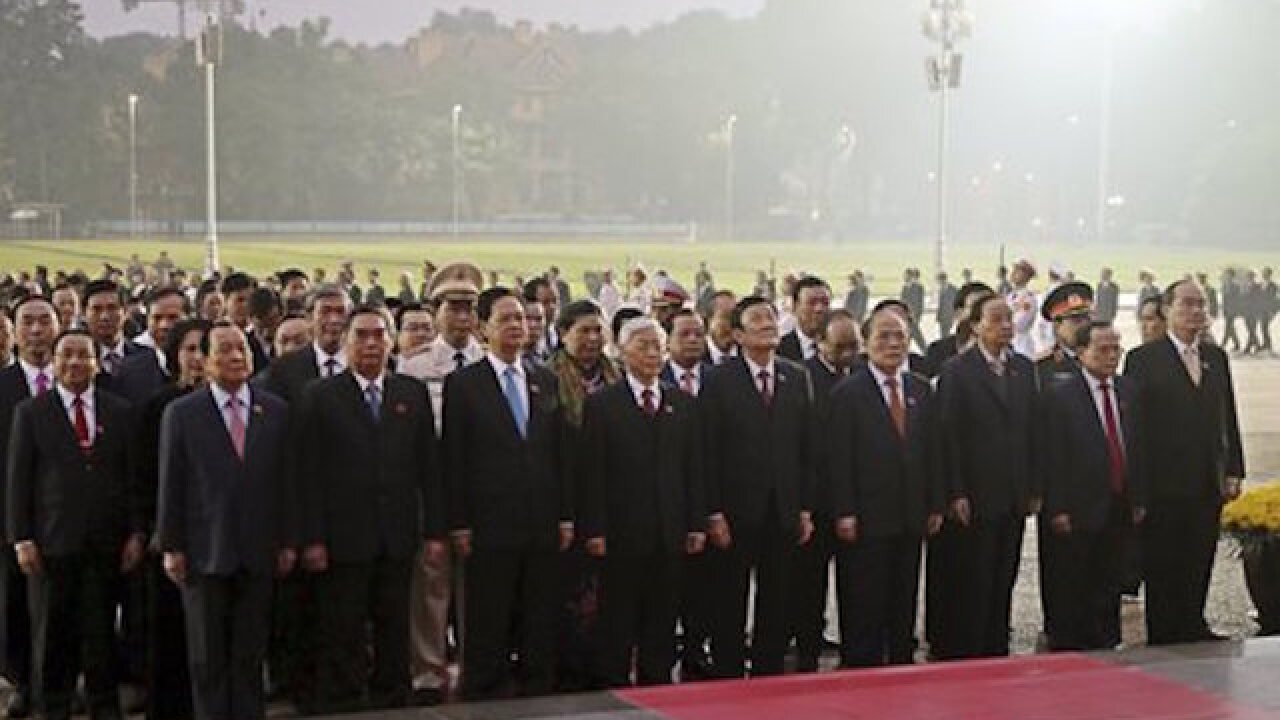 HANOI, Vietnam (AP) — Vietnam's ruling Communist Party on Thursday opened an eight-day congress that will culminate with the naming of a set of leaders who will govern the country for the next five years.

Held every five years, the Communist Party of Vietnam's 12th Congress has brought together 1,510 delegates representing Vietnam's 63 provinces, ministries, and other party organizations.

It ends Jan. 28 when the names of the new general secretary, the prime minister, the president, the chairman of the National Assembly and other top functionaries are announced. The general secretary is the de facto No. 1 leader of the country, although Vietnam professes a collective leadership through a Politburo that handles day to day affairs, and a larger Central Committee that meets twice a year to decide policy.

Vietnam is one of the last remaining communist nations in the world, with a party membership of 4.5 million, but like its ideological ally China, the government believes in a quasi-free market economy alongside a strictly controlled society that places several restrictions on its 93 million people.

The congress is not expected to hold any major surprises. Despite the veil of secrecy that the party pulls around its inner workings, it appeared Wednesday that an internal power struggle had ended before the congress, and the tussle was won by General Secretary Nguyen Phu Trong, 71, (pronounced New-yen Foo Chong) who is expected to keep his job, albeit for half the five-year term in an apparent compromise.

Trong won after it was agreed at a preparatory meeting Wednesday to continue with a controversial 2014 rule barring all but officially nominated candidates from consideration, with no new nominations allowed from the congress floor. Trong was endorsed as the general secretary candidate earlier this month.

This effectively sidelined Trong's rival, the 66-year-old Prime Minister Nguyen Tan Dung (pronounced New-yen Taan Dzoong), who had been vying for the general secretary's post. He is now expected to retire.

Although the names on the official list were not publicly announced, word was leaked that on the slate with Trong would be two of Dung's allies for the posts of prime minister and president. The selection would be the sort of balancing act that is the usual outcome of the conclaves.

Dung's apparent ouster raises questions about the direction of economic reforms he had been backing. The reforms have brought a flood of foreign investment, created a fledgling stock market and helped triple per capita GDP to $2,100 over the past 10 years, but his rivals accuse him of economic mismanagement and failing to control massive public debt and non-performing loans of state-owned banks.

A status quo will also put a question mark over Vietnam's relationship with China, its biggest trading partner and regional rival. Beijing has been expanding its territorial assertions in the South China Sea, but Vietnam has pushed back against those claims. Dung has been seen as standing up to Beijing, not afraid to criticize it, while Trong was seen as being soft on China.

Still, analysts say there won't be a sea change in policy, either in foreign relations or economic affairs.

"Trong has been less strident in his criticisms of Chinese behavior, but no one expects him to cozy up to Beijing in the face of tensions in the South China Sea," said Murray Hiebert, a Southeast Asian expert at the Center for Strategic and International Studies in Washington.

And despite their differing styles, Hiebert said both men recognize that the party's survival "depends on continuing economic reform and global economic diversification."

Experts also believe that regardless of who takes the top spot, Vietnam's ratification of the U.S. Trans-Pacific Partnership trade initiative and pace of improving ties with the U.S. will continue.

The country's three other top leaders — prime minister, president and National Assembly chairman— are nominated, but their actual selection is done by the National Assembly, which itself is elected about six months after the Congress.

All this is done behind closed doors. No media are allowed to cover the proceedings, and in any case Vietnamese media are controlled by the government.

It had not been a sure thing for Trong. Up until the past few weeks, Dung had been the odds-on favorite to take the top party post, even though Trong has several times in the past few years tried to undercut the popular Dung's growing political strength.

Dung took on the pro-Trong Politburo several times, coming out on top. In 2012, the Central Committee rejected a Politburo vote that would have cast blame on him for mismanaging the economy. Another effort to diminish his power backfired when a vote of confidence was held by the Central Committee in early 2015 on the top 20 party leaders, and he led the pack with the top number of supporters.

He also has been the target of murkier attacks, mostly through blog postings accusing him of nepotism and trying to tie him to corruption.

"Mr. Trong is an ideologue, who has a PhD in 'party building.' As the party general secretary, his most important task is to maintain party unity and ultimately the party's hold on power," said Le Hong Hiep, a visiting fellow at Singapore's Institute of Southeast Asian Studies.