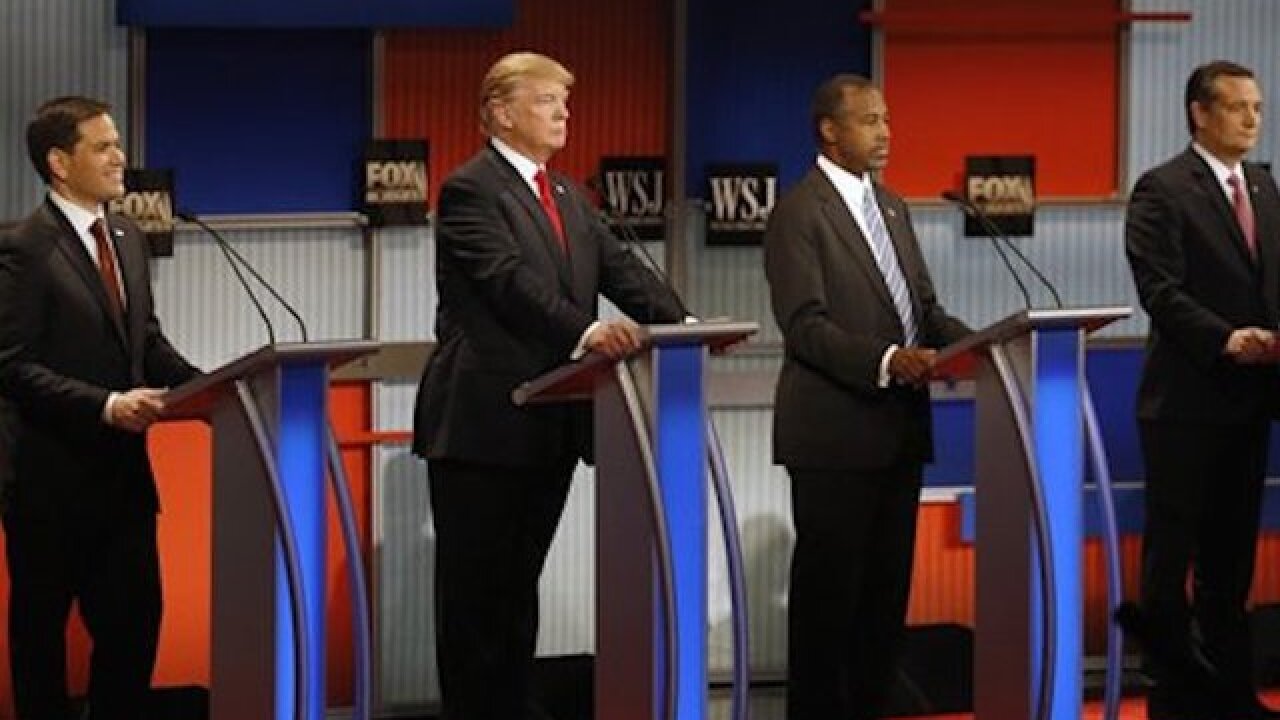 Morry Gash
<p>In this Nov. 10, 2015 file photo, Republican presidential candidate, from left, Sen. Marco Rubio, R-Fla., Donald Trump, Ben Carson and Sen. Ted Cruz, R-Texas, wait before the Republican presidential debate at the Milwaukee Theatre in Milwaukee. The leading Republican candidates for U.S. president are meeting for their first debate in more than a month in the shadow of terrorist attacks that refocused the race on keeping the country safe. (AP Photo/Morry Gash, File)</p>

WASHINGTON (AP) — The nine leading Republican candidates for president are meeting for their first debate in more than a month in the shadow of terrorist attacks that refocused the race on keeping the country safe.

Donald Trump remains the front-runner just seven weeks before the first votes are cast in Iowa, but much has changed. Islamic militants or those inspired by them are believed to have been behind the killings of scores of people in Paris; San Bernardino, California; and Mali, raising the prominence of national security expertise in a race that had made stars of outsider candidates. Expect Trump's proposal to ban Muslims from entering the U.S. to take center stage with him.

And look for a new top challenger to vie for attention. Ted Cruz, the Texas senator who has for months refused to criticize the former reality show star or his supporters, is posing a stiff challenge to Trump in Iowa on a similar anti-establishment platform.

Another likely change: volume. Listen for New Jersey Gov. Chris Christie, returning to the prime-time debate stage after being banished to the "undercard" debate last time, to try to shore up his place in the top tier.

For everyone else, the debate is a chance to stay in the conversation.

Here's what to watch for in CNN's prime time GOP presidential debate in Las Vegas:

Trump remains the leader in the GOP nomination race, still getting the buzz with his proposal to ban Muslims from entering the U.S. — temporarily and with exceptions, he says. Look for him to continue his pattern of not attacking unless he's attacked first — and springing like a trap if he is. He can expect to be called upon to defend his plan for Muslims, if nothing else.

Cruz enters the debate with the most momentum as he challenges Trump for the lead in Iowa, while not attacking the billionaire or his supporters. Look for Cruz to be asked about a recording leaked to The New York Times in which Cruz tells his supporters in a private meeting that people are looking for a candidate who can handle national security crises, saying, "Now that's a question of strength but it is also a question of judgment. And I think that is a question that is a challenging question for both" Trump and Ben Carson, whose standing has plummeted, to Cruz's benefit.

"In the course of a presidential election, the voters are going to make a decision about every candidate," Cruz said last week at the Heritage Foundation. "And ultimately the decision is, who has the right judgment — experience and judgment — to serve as commander in chief?"

Cruz has not said whether the closed-door comments were a swipe at his two rivals, though Trump certainly took it that way. He called Cruz a "little bit of a maniac" in return.

Watch for Florida Sen. Marco Rubio and Cruz to wrestle over policy-heavy questions on immigration and national security as Rubio tries to elbow into the pool of potential heirs to Trump and Carson's support bases. Trump wants to deport 11.5 million immigrants in the country illegally. Both Rubio and Cruz have done about-faces on previous immigration stances. Rubio has disavowed the massive 2013 bill he authored that passed the Senate. Cruz opposed that bill but now says his own amendments to it, to increase legal immigration, are not a good idea after all.

Look for Christie to capitalize on his new momentum in New Hampshire and secure his standing as a member of the field's top tier. Christie has been successful in previous debates at seizing on key moments to create newsworthy conflicts or rising above the fray by speaking directly to the camera and viewers at home. In an interview with The Associated Press on Friday, Christie sounded poised to focus on national security and his background as U.S. attorney after the Sept. 11 attacks. Look for him to try to cast some of the other candidates as less experienced on the subject and, in Rubio's case, not ready to be president.