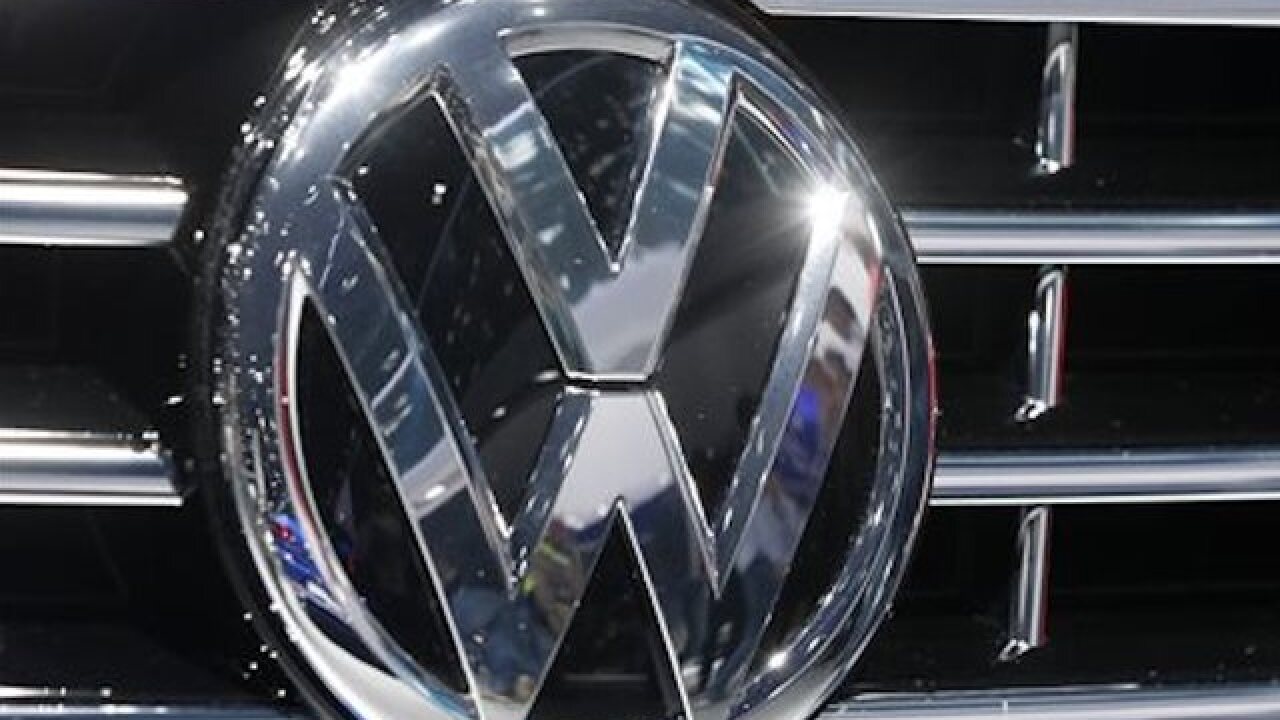 Michael Probst
<p>FILE - In this Sept. 22, 2015, file photo, the Volkswagen logo of a car is photographed during a car show in Frankfurt, Germany. A dealer familiar with Volkswagen's plans says the automaker intends to offer $1,000 in gift cards and vouchers to owners of smaller diesel cars as a gesture of goodwill to owners with 2-liter four-cylinder diesel engines that have been implicated in an emissions cheating scandal. (AP Photo/Michael Probst, File)</p>

WOLFSBURG, Germany (AP) — German carmaker Volkswagen capped two grim days for the country's auto industry by revealing its diesel emissions cheating cost it a chunky 16.2 billion euros ($18.2 billion) for 2015 alone — and that's likely only a part of the total bill.

The revelation last September from U.S. environmental authorities that the company had been cheating on emissions test rocked one of the world's most venerable brand names in the auto industry and cost it its chief executive as well as a host of goodwill.

It's also raised questions over the practices of others. On Friday, German government officials said five German brands, including Volkswagen, would conduct a voluntary recall over emissions issues, a day after Mercedes-Benz owner Daimler said it was conducting an internal investigation into its emissions certifications at the request of U.S. authorities.

The Volkswagen announcement follows agreement in a U.S. federal court in San Francisco on the outlines of a deal with U.S. environmental authorities.

Under the terms of the proposed deal, Volkswagen would offer to buy back almost 500,000 cars sold in the U.S. equipped with software that disabled emissions controls when the car was not being tested. Some 11 million cars worldwide are affected.

The company had delayed its earnings announcement until it could get a better estimate of the costs involved. Now that it has revealed the cost of the scandal, Volkswagen said Friday that it is to post a massive net loss of 5.5 billion euros for last year.

However, analysts say Volkswagen's financial problems don't end there and that the total costs in fines, legal judgments and lost sales will be significantly higher.

Volkswagen also said it will not be able to release results of an internal probe of its emissions scandal this month as expected. The company now says the probe conducted by U.S. law firm Jones Day could be completed by year-end.

The company said early release of partial results would interfere with settlement negotiations in the U.S. and could interfere with cooperation with U.S. law enforcement. Some 450 interviews have been consulted and 65 million documents submitted for electronic review.

On advice of the company's attorneys, management and directors "have nevertheless had to recognize that a disclosure of interim results of the investigation at this point in time would present unacceptable risks for Volkswagen and, therefore, cannot take place now."

Volkswagen CEO Matthias Mueller said as he released the headline earnings numbers that the company remains "fundamentally healthy" and that he is "convinced that Volkswagen has what it takes to overcome its challenges."

Volkswagen's announcement coupled with more negative news about German companies and auto emissions that has weighed heavily on their share prices. Volkswagen's share price was down 1 percent in late Frankfurt trading while Daimler's tanked 6 percent.

The scandal is not just confined to German automakers — Japanese company Mitsubishi Motors and Italy's FIAT also have questions to answer.

Still, Germany's car companies appear to be having the most trouble at the moment.

On Friday, Germany's transport minister, Alexander Dobrindt, said five German automakers agreed to recall a total of 630,000 diesel vehicles in Europe following an investigation into their emissions levels. He identified the companies concerned as Mercedes, Opel and Volkswagen and its subsidiaries Audi and Porsche.

The move followed a probe of 53 models by Germany's Federal Motor Transport Authority that was sparked by revelations last year about Volkswagen's emissions test cheating. VW's cars could tell when they were on the test stand and turned up the emissions controls, then turned them off in real-world driving to improve performance and mileage.

Dobrindt said none of the newly scrutinized models were found to have rigged engine control software devices of the kind used by Volkswagen, but that they displayed elevated levels of nitrogen oxide in both laboratory and real-world tests.

Some models used technology to switch off the vehicles' emissions treatment systems at certain temperatures to protect the engine, he said.

While such technology is legal, investigators found that the temperatures at which the emissions treatment systems were throttled didn't appear to be justified in all cases, so the five manufacturers agreed to voluntarily recall those vehicles. Additionally, all engine protection features would have to be declared and fully explained by manufacturers in future before their cars are approved by German authorities, Dobrindt said.

Separately, Italian automaker FIAT is being investigated following a tip from parts supplier Bosch about possible emissions irregularities, he said.