House to vote on anti-Obamacare bill 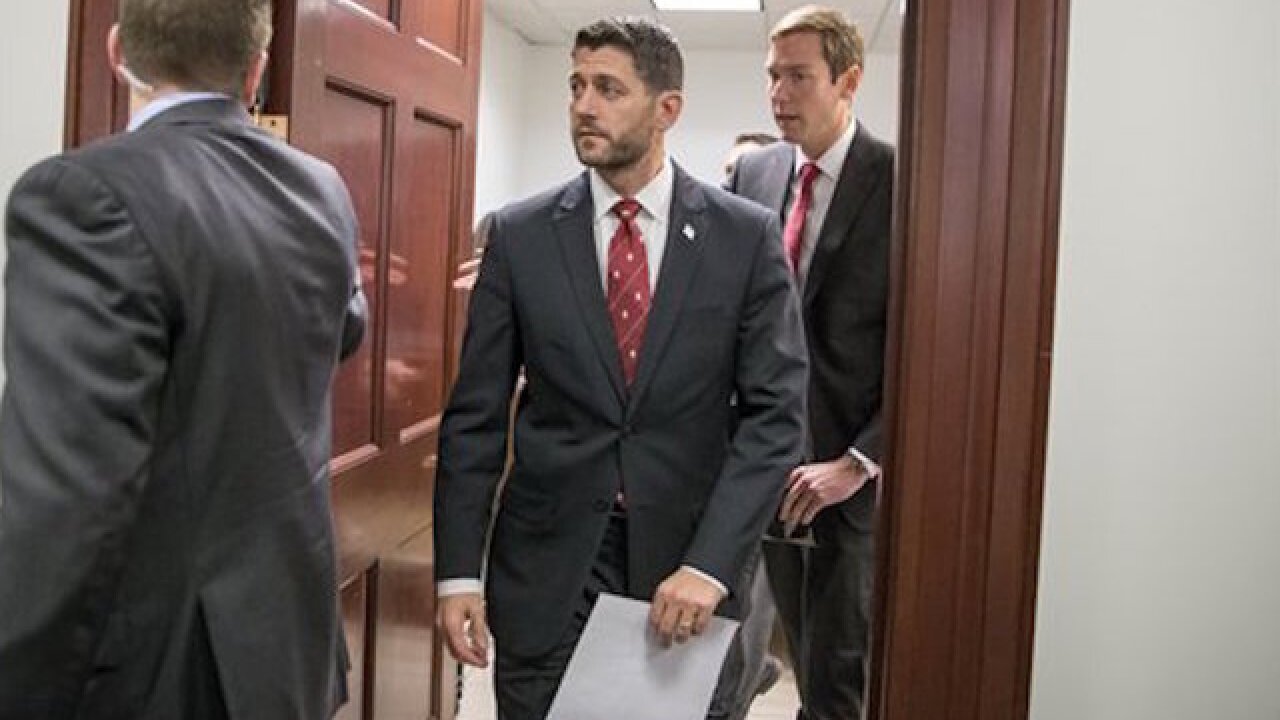 J. Scott Applewhite
<p>FILE - IN this Dec. 1, 2015, file photo, House Speaker Paul Ryan of Wis., emerges from a closed-door GOP strategy session at the Capitol in Washington. Ryan promised a fresh start for the House as the new Speaker. Yet itís looking like business as usual as lawmakers wrap up a year-end spending bill that pays for Planned Parenthood, the presidentís health care law and other Obama administration priorities. (AP Photo/J. Scott Applewhite, File)</p>

WASHINGTON (AP) — The House is poised to send a bill to President Barack Obama's desk repealing his signature health care law, a sharply partisan start to a presidential election year in which legislating may take a back seat to politics on Capitol Hill.

The legislation will be the first order of business when the House reconvenes later this week. After dozens of repeal votes in the House and Senate, it will mark the first time a bill repealing the health law makes it all the way to the White House.

Obama will veto the measure, which also would cut money for Planned Parenthood and already has passed the Senate under special rules protecting it from Democratic obstruction. But that's the point for Republicans, who intend to schedule a veto override vote around Jan. 22, when anti-abortion activists hold an annual march in Washington.

Republicans said Monday the vote will fulfill promises to their constituents while highlighting the clear choice facing voters in the November presidential election.

"Obamacare is a failure and taxpayer funding of abortion providers is wrong. With this bill, we will force President Obama to show the American people where he stands," said House Majority Leader Kevin McCarthy, R-Calif. "Congress is making its choice clear."

Democrats rejected the approach, in a clash that could set the tone for a partisan year.

"They have no plan. Republicans just want to undo what Democrats have fought for for decades," Democratic presidential front-runner Hillary Clinton said at a town hall meeting in Davenport, Iowa. She said if a Republican succeeds Obama in the White House, the health law "will be repealed and then you will have to start all over again."

In the Senate, which reconvenes Jan. 11, a week later than the House, early action will include a vote on a proposal by Sen. Rand Paul, the Kentucky Republican who is running for president, for an "audit" of the Federal Reserve. Democrats are likely to block it. But, like the health repeal bill in the House, the vote will answer conservative demands in an election year.

Also expected early in the Senate's year is legislation dealing with Syrian refugees, following House passage of a bill clamping down on the refugee program. Conservatives were angry when 2015 ended without the bill advancing. Senate Republican leader Mitch McConnell of Kentucky promised a vote, though without specifying whether it would be the House bill or something else.

The House Benghazi committee will continue its investigation of the attacks that killed four Americans in Libya in 2012, with a closed-door interview of former CIA Director David Petraeus on Wednesday and former Defense Secretary Leon Panetta on Friday. That comes amid new Democratic accusations of political motives aimed at Clinton after the committee chairman, Rep. Trey Gowdy, R-S.C., endorsed Sen. Marco Rubio, R-Fla. for president. Clinton was secretary of state at the time of the Benghazi attacks.

New Speaker Paul Ryan of Wisconsin promised a bold agenda after succeeding former Rep. John Boehner as speaker last fall, and that will begin to take shape at a House-Senate GOP retreat next week in Baltimore. Thus far Ryan has pledged efforts to overhaul the tax system and offer a Republican alternative to the health overhaul.

In the Senate, McConnell's primary focus is on protecting the handful of vulnerable Republican senators whose seats are at risk as Democrats fight to regain the Senate majority they lost a year ago. That means weighing the political risks and benefits of every potential vote to endangered incumbents in Ohio, Illinois, Wisconsin, Pennsylvania and New Hampshire.

Such considerations could determine whether McConnell allows criminal justice overhaul legislation — the one issue cited by Obama and lawmakers of both parties as ripe for compromise — to come to the floor. McConnell already has suggested that prospects for approval of Obama's long-sought Asia trade pact are dim, and the senator has ruled out major tax overhaul legislation as long as Obama is president.

McConnell could also try to put his thumb on the scales of the presidential race with two GOP senators having emerged as leading contenders.

Sen. Ted Cruz of Texas has been a thorn in McConnell's side, once calling the GOP leader a liar, and has frosty relations with his fellow senators. Rubio is on good terms with fellow lawmakers and has been endorsed by several of them. McConnell could schedule debate on an issue with the potential to favor Rubio politically over Cruz, such as National Security Agency wiretapping authority.

But McConnell insists he is staying out of it.

"We all have a big stake in having a nominee for president who can win, and that means carrying purple states, and I'm sure pulling for a nominee who can do that," McConnell told The Associated Press in a recent interview, refusing to elaborate on who might fit that description.