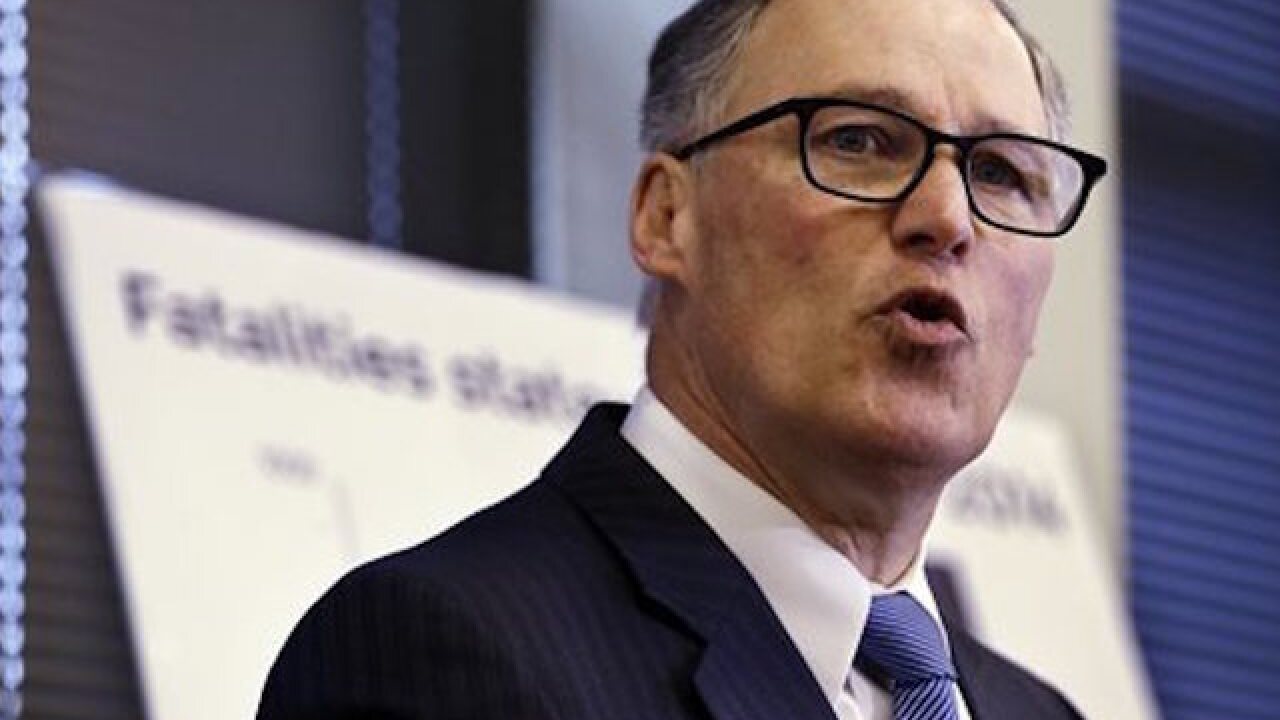 "We are not afraid to take action here in Washington state," Inslee said after criticizing inaction by Congress on gun violence.

Inslee appears to be the first governor in the nation to take action on the issue after an announcement earlier this week by President Barack Obama regarding an executive order.

Inslee praised Obama's plan to create a more sweeping definition of gun dealers as a way to increase the number of sales requiring background checks. Both leaders are Democrats.

As the result of a successful 2014 ballot measure, Washington state already has expanded background checks to include online sales and purchases at gun shows

The initiative came the same year the state saw two deadly campus shootings. In Marysville, a high school student killed three 14-year-old girls and a 15-year-old boy after inviting them to lunch in the cafeteria, authorities said. Earlier, a 19-year-old student was killed and two others wounded in a shooting at Seattle Pacific University.

Legislative Democrats in California also applauded the president's action and are planning a package of gun control measures, but they have yet to introduce the proposals. The effort was launched after the San Bernardino attack that killed 14 in December.

California Senate President Pro Tem Kevin de Leon, D-Los Angeles, said in an interview last month that the bills will include ways to address so-called ghost guns that can be built from parts at home and do not have a serial number.

States, however, are limited in what gun laws legislators can enact. Still, much of what the president has proposed is already in effect in Washington, California and a handful of other states.

In his executive order, Inslee said firearm deaths now exceed motor vehicle crash fatalities in the state and that 80 percent of firearm deaths are suicides.

Inslee, who is seeking re-election later this year, outlined his plans with representatives of the University of Washington School of Social Work and the director of the Harborview Injury Prevention and Research Center.

It calls for better data analysis of the effectiveness of current gun safety efforts; looking for failures in the state's current methods of sharing information among law enforcement and social service agencies; and eyeing gaps in the state's firearm purchasing laws.

"This will be a data-driven approach that helps us identify the people and places most susceptible to gun crime and suicide," Inslee said. "Gun crime is a scourge that has scarred thousands of families in every corner of our state. It's a scourge we can, should and will help prevent."

King County Sheriff John Urquhart said the governor's actions will help law enforcement get a better handle on where street guns are coming from and may help them follow-up on the people who try to buy guns but fail to do so because of the background check system.

Urquhart and other speakers said Inslee's proposals carefully skirt some of the most divisive issues involving guns and focus on things gun owners and gun haters can agree on.

"When you have bullies yelling, you can't have any progress," Urquhart said. "There's common ground there and we need to shame both sides into sitting down together."

Gun safety advocate Cheryl Stumbo, who was in the audience at Inslee's news conference, said she was pleased the governor is working to link mental health issues and gun violence.

Stumbo survived a 2006 shooting at the Jewish Federation of Greater Seattle.

Steven Nielson, chairman of the Libertarian Party of Washington State, criticized Inslee's action saying it was another step away from the guidelines of both the state and U.S. constitutions.

"I think that mental health issues need to be addressed, especially as it relates to veterans and at risk individuals and teens. But that is not a gun control issue," Nielson said.