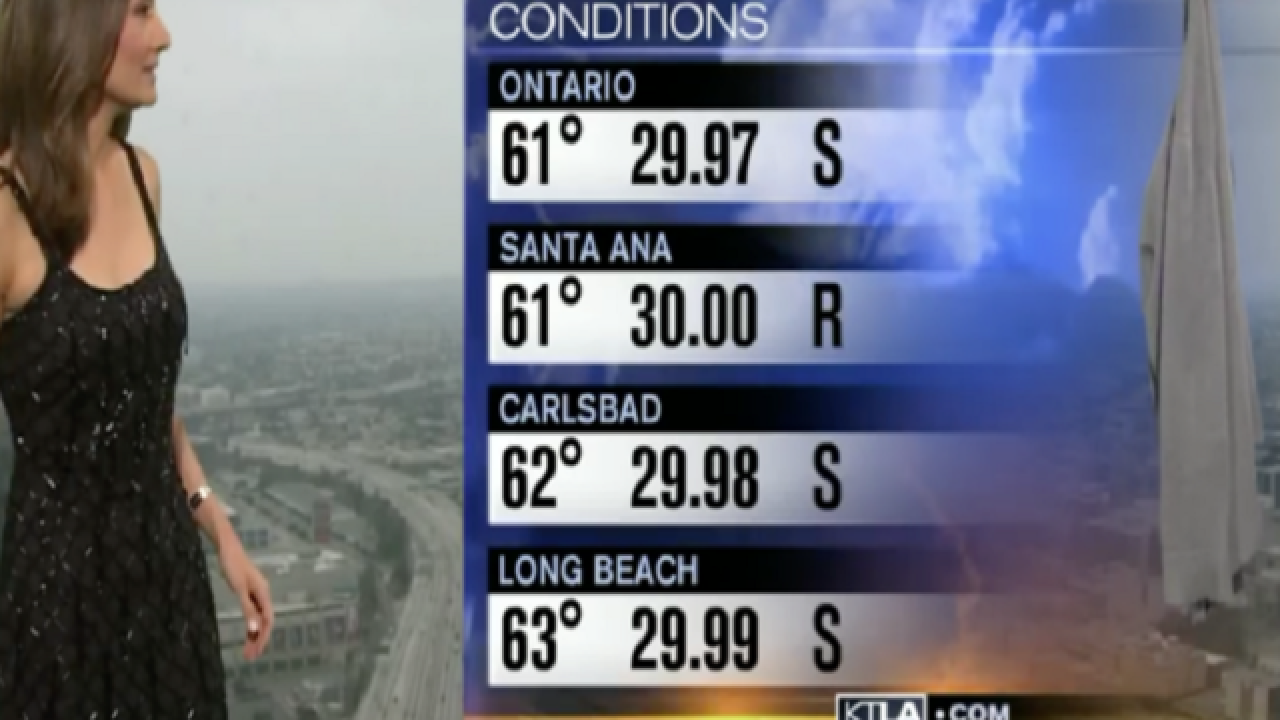 LOS ANGELES (AP) — It's become so common for some female TV weather reporters to dress like they are on the way to a cocktail party that their dresses should have long ago ceased to raise any eyebrows among viewers.
But there was eyebrow-raising aplenty across the Internet this week after KTLA-TV weather anchor Liberte Chan's co-host handed her a dull-looking, gray sweater and she pulled it on over her black, sparkly, spaghetti-strap evening dress while delivering her report Saturday.
"You want me to put this on? Why? Because it's cold?" Chan quipped when co-host Chris Burrous dangled the sweater from off camera as she was in the middle of explaining why the gloomy weather gripping LA was going to stick around awhile.
"We're getting emails," he answered.
That was nothing compared to what they would get in the days ahead.
Soon Chan and her black, sparkly dress were trending on social media. The cast of NBC's "Today" show was cracking wise ("It's never the crime, it's the cover-up," Savannah Guthrie said). New York Daily News columnist Linda Stasi was saying it was time TV stopped making its women dress like strippers while allowing fat, bald, old men to deliver the news.
"You would think this is Trump versus Clinton," Burrous said on Sunday's broadcast. "Never before have we received so many emails."
He didn't say how many, and KTLA officials didn't respond to a phone message Monday. But Burrous said the vote was roughly 50-50 in favor of and against the dress.
He didn't reveal how many people thought he was an idiot for handing her the sweater live on the air.
"I cannot believe the station had the nerve to have someone dangle that sweater at you — distracting you and your report and the viewer," one of the hundreds who left comments on Chan's Facebook page said. "They were absolutely ridiculous in doing this."
Burrous said the next day that he was only joking, and Chan, who is both a meteorologist and a veteran news reporter, backed him up.
By today's TV news standards, her dress was actually fairly modest. It revealed no cleavage, and the hemline was no more than an inch or two above her knees. It was the sparkles and straps that seemed to incense critics. One email said she looked like she'd stayed late at a party and arrived wearing the same dress as the night before.
Her attire, however, had actually been her second choice that day.
Her first choice was a modest print with an elaborate design that had clashed with the green screen that weather reporters stand in front of so viewers at home can see all those fancy graphics they're describing.
So she switched to the black dress.
By Monday she had moved on, even if others hadn't. Her most recent Facebook post linked to a story about a dog that saved a little girl from a rattlesnake.
RTV6