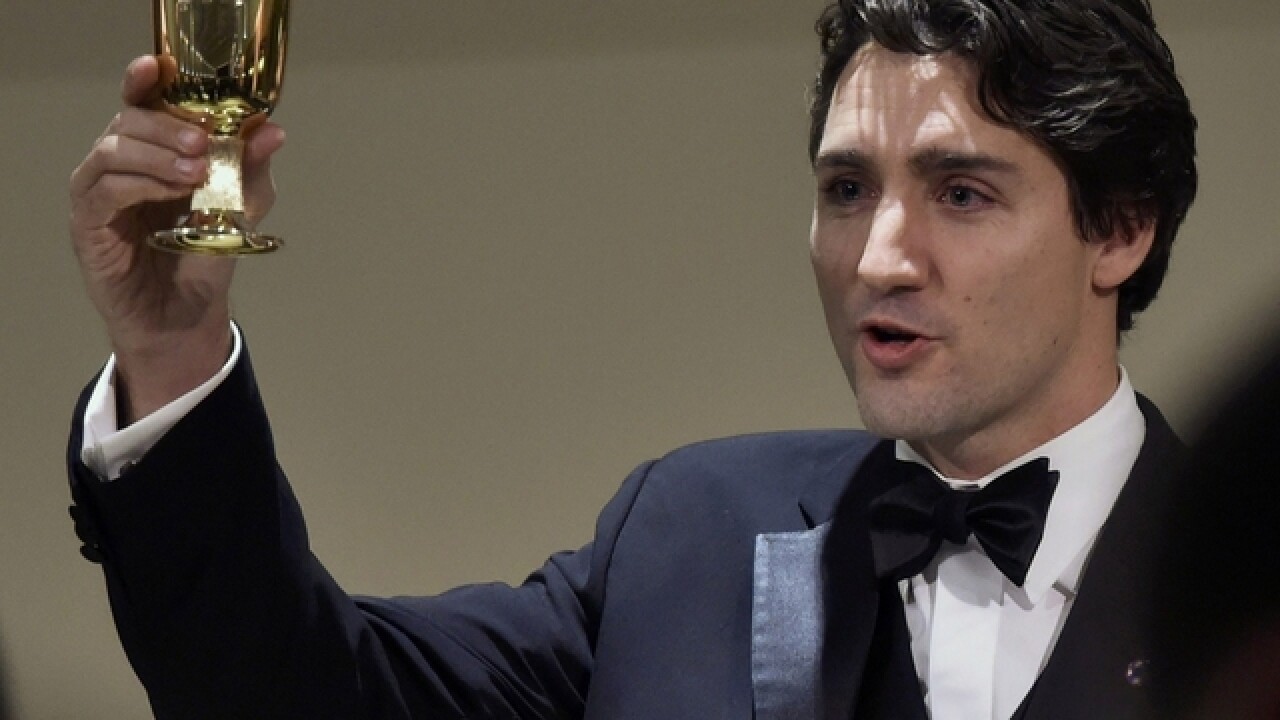 WASHINGTON (AP) — Justin Trudeau hopes to strengthen U.S.-Canada relations Thursday when the new, young liberal leader makes a much-anticipated visit to the White House.
Trudeau, who has captured Americans' attention in a way not seen since his father's time, gets one of the highest honors the U.S. reserves for close allies: a pomp-filled visit that includes a meeting with President Barack Obama and a state dinner, the first for Canada since 1997.
Trudeau, the 44-year-old son of late Prime Minister Pierre Trudeau, is accompanied by his wife, Sophie Gregoire.
"He's going to make a real splash in Washington," Canadian Trade Minister Chrystia Freeland said in a phone interview.
Freeland, a former U.S.-based news executive, said Canada is "a little bit like the girl next door, absolutely essential, a bedrock relationship, but easy to not focus on because there are so many more troubling and more exotic distractions." But Freeland said Canada needs "Americans to take the relationship seriously," and Trudeau helps put Canada on the radar.
Canada is the United States' largest trading partner, with more than $2 billion worth of goods and services crossing the border every day. About 75 percent of Canada's exports go to the U.S.
Trudeau's father swept into power in 1968 on a wave of support dubbed "Trudeaumania" and, with a short interruption, served until 1984. He was often compared to John F. Kennedy and remains one of the few Canadian politicians known in America.
Tall and fit, Justin Trudeau channels the charisma of his father. He aims to restore his father's legacy as leader of the Liberal Party, which was under siege during 10 years of Conservative rule under Stephen Harper, Trudeau's predecessor.
Harper's relations with Obama were strained over various issues, notably the proposed Keystone XL oil pipeline, which the Obama administration rejected last year. Amid the tensions, U.S. Ambassador to Canada Bruce Heyman could not get a meeting with Harper or his Cabinet ministers for months.
But Trudeau's election in October ushered in a new era for Canada's politics that Trudeau, Heyman and others hope will help strengthen relations with the U.S.
"President Obama has only had nine state dinners, so he only has one or two a year. The fact that Canada is his 10th state dinner is a strong demonstration of the U.S.-Canada relationship and the importance to the president," Heyman said in an interview. "These are two leaders who have very similar goals and philosophies."
Environmental initiatives and new border measures are expected to be announced after the two meet Thursday.
"There is developing a special relationship between this president and the prime minister," said Mark Feierstein, a senior member of the president's National Security Council. "Both are young leaders with similar visions. Both have a progressive vision of governance. Both are committed to appropriate use of multilateral tools. Both are committed to diversity."
Associated Press 2016