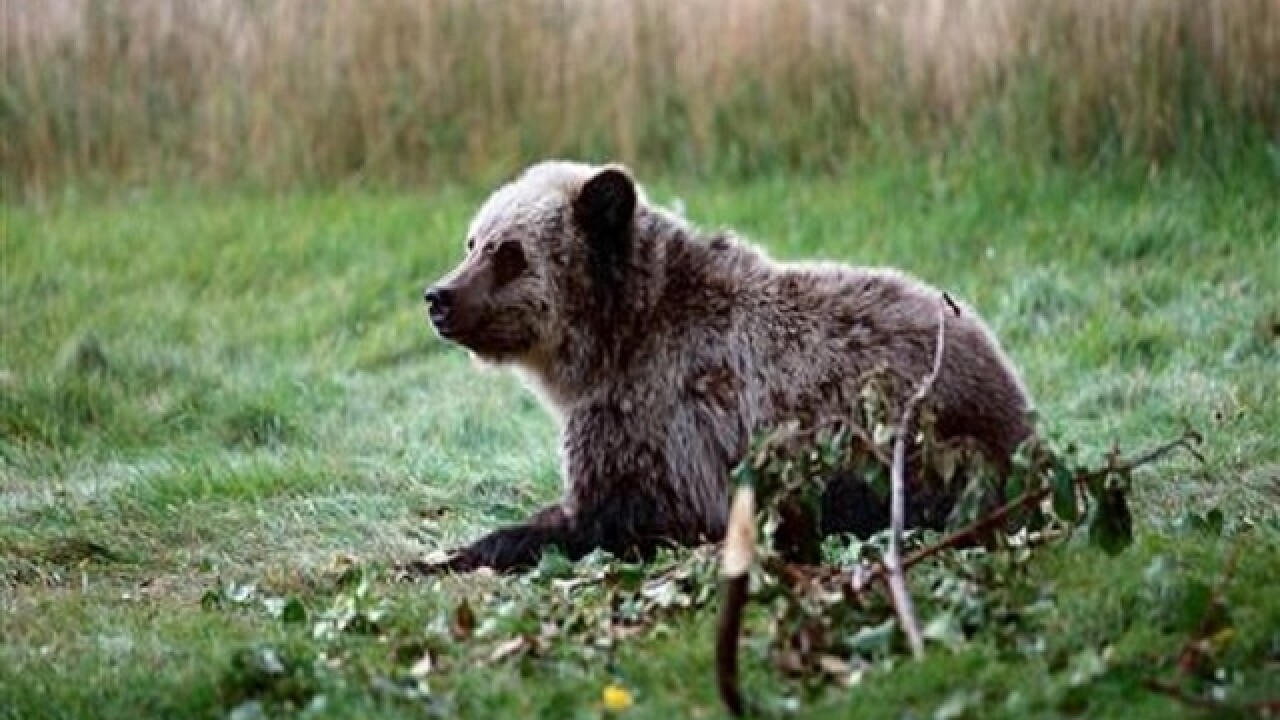 HELENA, Mont. (AP) — Wildlife officials set traps, installed wilderness cameras and scouted the woods by helicopter Thursday for the bear that attacked and killed a U.S. Forest Service employee as he rode a mountain bike along a trail outside Glacier National Park.
Brad Treat, 38, was knocked off his bike Wednesday after he and another rider apparently surprised the bear — a grizzly, according to initial and still-unconfirmed accounts — in the Flathead National Forest, authorities said. The other rider, a relative of Treat's whose name was not released, went to get help and was not hurt.
RELATED: Grizzly kills mountain biker near Glacier National Park
Bears that attack humans are killed if it is found that they displayed predatory behavior, such as stalking the person, or consumed their victim.
In this case, officials said is too soon to say what will be done to the bear if it is found. They are trying to determine if it was a mother with cubs, whether it was protecting a food cache nearby or whether it simply reacted to the sudden appearance of the bikers, Montana Fish, Wildlife and Parks spokesman Ron Aasheim said.
"One of the things that is key to all this is whether it was a predatory act," Aasheim said. "I don't think there's any sense that this was predatory."
Wildlife officials set traps near the trail, flew low over the trees and hoped cameras would spot the bear — but had turned up nothing as of Thursday afternoon.
There was no telling whether the bear was still in the area, and it was unclear just how long the search would continue.
"We're taking it one day at a time, seeing what results we get," said another FWP spokesman, John Fraley. "You just can't predict what a bear is going to do."
Part of the difficulty is that bears can range for miles and the area is dense with grizzlies, authorities said. There are an estimated 1,000 in the Northern Continental Divide Ecosystem, which includes the park.
To confirm whether they have the right bear, wildlife officials typically collect DNA from the animal to compare it with evidence at the scene, analyze bite marks and other injuries on the victim, and examine the animal's claws, jaws and feces for human remains.
Wildlife officials said they are testing DNA to establish whether it was a grizzly or a black bear that killed Treat. However, they won't know until next week whether the samples they collected at the site of the attack will be usable, Fraley said. If a bear is trapped, wildlife officials would have to hold it until then.
Also, an autopsy was performed on the victim at the state crime lab, and the evidence gathered could help determine the size, age and sex of the bear, narrowing the search, Flathead County Sheriff Chuck Curry said.
Authorities closed the area, about 3 miles from Glacier's western entrance, as a precaution.
Grizzlies in the Lower 48 states have been designated a threatened species since the 1970s, but their numbers are increasing and so are run-ins between humans and bears.
Before Wednesday, at least six people had been mauled to death by bears in the Northern Rockies since 2010, but all those cases were in the Yellowstone National Park area, which is about 360 miles from Glacier and has at least 700 grizzlies.
Before Treat was killed, there had been 10 bear-related human deaths in Glacier since the park was created in 1910. The last was in 1998, when three bears killed and partially ate a park vendor employee while he was hiking.
Treat had been a law enforcement officer with the Forest Service since 2004, and was previously a ranger in Glacier National Park. He was an integral part of the tight-knit community of Forest Service employees in northwestern Montana, Flathead National Forest spokeswoman Janette Tusk said.
"They are traumatized and affected by this, grieving the loss of a comrade," she said.
Treat was married and lived just across U.S. Highway 2 from the trail system where he died.
He grew up in Kalispell, where he was a standout distance runner in high school, and went on to compete for Washington State University, according to a longtime friend Miles Mason.
Treat met his future wife, Somer Hileman, of West Glacier, on summer break while still at Washington, and later transferred to her school, the University of Montana, Mason said.
Mason described the victim as "ultra-competitive" and said he used to get awakened by his friend every morning to go run.
"He was always the runner I aspired to be and, as I got to know him, the friend I aspired to be and later the husband I aspired to be. An amazing person," Mason said.
Former coach Paul Jorgensen recalled that Treat would usually be among the top finishers during cross-country meets but would stick close to the finish line to congratulate all the other runners as they came in. The coach liked that so much he asked the other athletes on the team to do the same thing.
Copyright 2016 The Associated Press. All rights reserved. This material may not be published, broadcast, rewritten or redistributed.