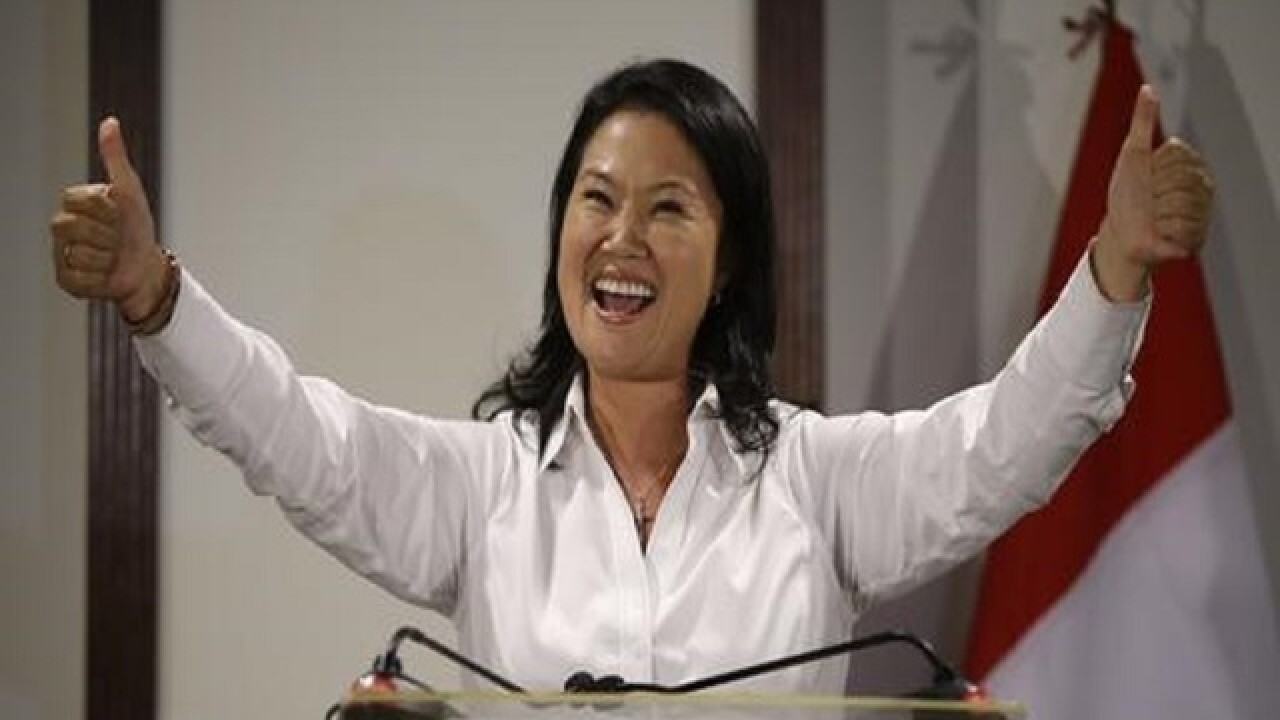 Martin Mejia
<p>Presidential candidate Keiko Fujimori gives the thumbs up during a news conference, in Lima, Peru, Sunday, April 10, 2016. Exit polls pointed to Keiko, the daughter of jailed former President Alberto Fujimori emerging with the most votes, though not the simple majority needed to avoid a runoff election. (AP Photo/Martin Mejia)</p>

LIMA, Peru (AP) — The daughter of jailed former President Alberto Fujimori looked headed to victory in the first round of Peru's presidential election Sunday and will likely face a former World Bank economist in a June runoff, preliminary results indicated.
With 20 percent of the ballots counted late Sunday, Fujimori had 38 percent of the vote. Investor-favorite Pedro Kuczynski had just under 26 percent, while leftist congresswoman Veronika Mendoza, who had made a late surge in pre-election polls, was running third with 16 percent.
Full results might not be available until Monday, but supporters of the 77-year-old Kuczynski celebrated in the streets outside his campaign headquarters after two unofficial quick counts indicated he would edge out Mendoza for the right to face off with Fujimori on June 5. Such counts have been reliable predictors of results in previous Peruvian elections.
The center-right Fujimori led opinion polls for months, but faces a competitive runoff scenario because of how polarizing a figure she is among Peruvians, who either adore her father for defeating Maoist-inspired Shining Path rebels and taming hyperinflation or loathe him for human rights abuses and ordering tanks to shut down Congress. Almost half of Peruvians surveyed said they would never vote for anyone associated with her father, who is imprisoned for human rights violations.
In a bid to project a more moderate image, Fujimori promised during her campaign not to pardon her father if elected. On Sunday night, she told supporters it was time to bury the past.
"The new political map being drawn clearly shows Peruvian want reconciliation and don't want to fight anymore," she said.
In the campaign's final weeks, Fujimori's opponents took to city streets by the thousands to warn against what they said would be a return of authoritarian rule if Fujimori became president.
Adding bitterness to the race, two candidates, including Fujimori's strongest rival, were barred from the race by Peru's electoral tribunal for campaign violations or technicalities, decisions questioned by the Organization of American States.
If Kuczynski holds on to the No. 2 spot, it will ensure Peru continues along a free-market path after Mendoza's rise in the polls spooked investors.
After finishing a strong third in the 2011 election, Kuczynski threw his support behind Keiko Fujimori in that year's runoff. He later said he regretted that decision but considered it necessary in trying to prevent the election of leftist Ollanta Humala, who despite having ties to socialist Venezuela and leading an army rebellion in his youth kept up a pro-business policy framework as president. The constitution barred him from seeking a second, consecutive term.
Kuczynski is now urging Peruvians to turn the page on the widespread corruption and human rights violations associated with the Alberto Fujimori years.
But with an elite pedigree he may face a hard time connecting with Peruvians, especially in rural areas where support for Keiko Fujimori is strongest.
Her Popular Force party secured an estimated 60 seats in the 130-member congress, while five other parties split the remaining seats.
Sunday's elections provided notable defeats for traditional politicians. Two former presidents, Alejandro Toledo and Alan Garcia, finished near the bottom of the 10-candidate field, while the congressional slate for Garcia's almost century-old APRA party barely got by the minimum 5 percent threshold to hold onto its legal standing.
Associated Press 2016