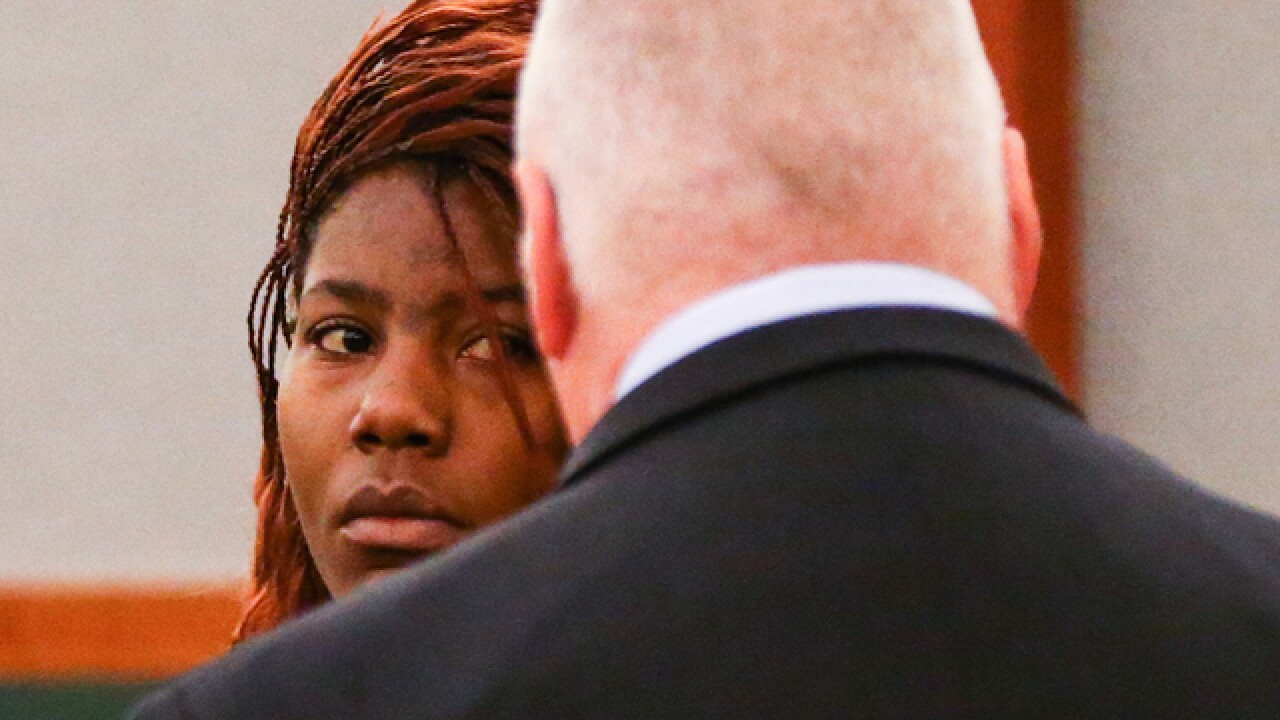 Chase Stevens
<p>Lakeisha Nicole Holloway, left, confers with one of her public defenders, Scott Coffee, in district court for her arraignment Wednesday, Dec. 23, 2015, in Las Vegas. Holloway, who crashed her car into pedestrians on the Las Vegas Strip on Sunday, Dec. 20, has been charged with murder, child abuse and hit-and-run.</p>

A woman accused of intentionally plowing a car carrying her child car through crowds of pedestrians on a Las Vegas Strip sidewalk spent less than two minutes Wednesday getting arraigned on murder, hit-and-run and child abuse charges.

Lakeisha Nicole Holloway, 24, pursed her lips and blinked as she was led in shackles into a courtroom. She was not asked to enter a plea but nodded to acknowledge that she understood she'll remain in jail through the holidays while both sides investigate Sunday's crash that killed one and injured dozens.

Defense lawyer Joseph Abood later characterized Holloway as "distraught" and overwhelmed. She plans to plead not guilty when the time comes, he said.

"This is sad and tragic for everybody involved," he said, adding, "Just because she's charged, doesn't mean she's guilty."

A judge set a Jan. 20 date for a preliminary hearing of evidence that police say they're still collecting.

Clark County District Attorney Steve Wolfson said outside court that the evidence he has seen is clear, and that additional charges are likely, depending on the results of drug and alcohol tests and police findings. Those charges could include multiple counts of attempted murder with a deadly weapon.

Wolfson characterized the quality of surveillance video that captured the crash as "superb." He said he believes it clearly shows Holloway intended to kill and injure people in front of the Planet Hollywood and Paris Las Vegas resorts.

"If you intentionally try and run somebody over, that certainly qualifies as an attempted murder charge, and that's one we are strongly considering," Wolfson said.

Left unanswered was what led a former award-winning high school graduate to mow down tourists and put her 3-year-old daughter in danger, according to authorities.

"We have heard nothing but good things about her in the past," Abood said. "This is a surprise to everyone. We have a lot of investigating and a lot of work to do."

The crash killed Jessica Valenzuela of Arizona and injured at least 35 others from several states, Mexico and Canada. Three people were still in critical condition, and five others remained hospitalized.

Abood, who represented another driver in a similar crash on the Strip in September 2005, said he and co-counsel Scott Coffee will need to see police reports, witness accounts and video before deciding on Holloway's defense.

Holloway is on suicide watch in jail, where she is being held without bail. The lawyer said Holloway's mental health could become an issue but that she had not had a psychological evaluation.

Casino and street surveillance video shows the 1996 Oldsmobile driving down a sidewalk and hitting tourists, while avoiding street signs, light poles and other vehicles, authorities say. The car swerved back onto Las Vegas Boulevard and then onto the sidewalk again. The video may not be made public until a later court hearing.

The felony charge of child abuse and neglect accuses Holloway of endangering her daughter, who was riding in the backseat. The girl wasn't hurt in the crash, and child welfare officials are caring for her.

Holloway is from Oregon, where she changed her name in October to Paris Paradise Morton. She won honors for overcoming a rough childhood and homelessness to graduate from an alternative high school in Portland.

She was featured in a 2012 video produced by the nonprofit Portland Opportunities Industrialization Center, which helps at-risk youths with education and job training. She said she was going to college and entering the workforce.

"Today I'm not the same scared girl I used to be," Holloway said in the video. "I'm a mature young woman."

The U.S. Forest Service hired her to do administrative work in its Portland office. Holloway joined the agency in 2009 and resigned in 2012, spokesman Glen Sachet said. She took a four-month break in late 2010.

Holloway had been in Las Vegas for about a week, police said. After her arrest Sunday, she told investigators she was broke, homeless and tired of being shooed away from casino parking garages, where she and her daughter would sleep in the car.

She might have been on her way to Texas to find the girl's estranged father, authorities said.

Abood and Coffee didn't answer a question about whether they have spoken with the father.

People jumped on the car and banged on its windows, but Holloway kept driving, authorities say. She went about a mile with the broken windshield and a flattened tire before pulling into an off-Strip hotel and telling a valet to call 911.

A police drug-recognition expert said she wasn't drunk but may have been under the influence of a stimulant.