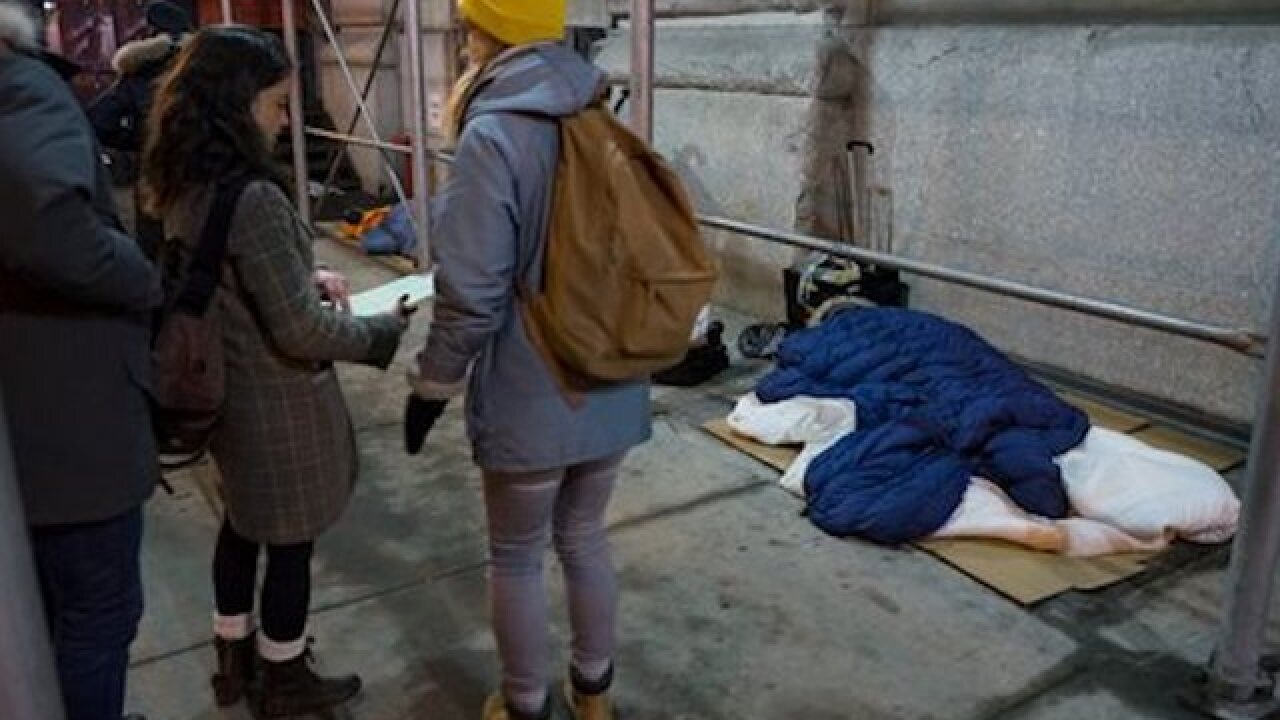 Copyright Associated Press
Craig Ruttle
<p>Alexis Sypek, center left, and Ashley Treni, center, both from New York and working with The Robin Hood Foundation, an organization that helps the poor, prepare their paperwork before speaking to a sleeping homeless person, right, during a count and survey of the homeless on the streets of New York early Tuesday, Feb. 9, 2016. Hundreds of people fanned out across the city to conduct the survey just after midnight. (AP Photo/Craig Ruttle)</p>

NEW YORK (AP) — Over the past few weeks, thousands of clipboard-toting volunteers have fanned out across some of the nation's largest cities, tasked with a deceptively complex job: counting the number of homeless people sleeping on the streets.

And under federal rules, they've had to do it under difficult conditions that some social service groups say are bound to produce an inaccurate tally. The official counts are done only once a year, in the dead of winter, when homeless people are more likely to be hunkered down in places that are hard to see.

The challenging nature of the count was on display at 2 a.m. Tuesday in New York City when volunteers knelt down to question a man sleeping on a Seventh Avenue sidewalk beneath a camouflage blanket. Beside him, a cardboard sign read "Anything helps."

"Excuse me? Sir?" volunteer Victoria Parker prodded, appearing to startle the man before launching in to her list of questions.

"Do you have some place where you consider your home or some place you live?"

"Have you served in the armed forces?"

To each question the man simply shook his head "no."

Finally, she asked if he would like to go to a shelter. Again he shook his head. She thanked him and, as her partner recorded the man's answers on the tally sheet, the homeless man laid his head back down to sleep as snow began to fall.

The count is mandated by the federal government in order for the cities to receive certain kinds of funding. It has taken place all over the country in the last few weeks in cities such as Philadelphia, Houston and Boise, Idaho. But it has faced significant criticism.

Some social service groups argue that it should be done more often, because the number of homeless spotted on the street could change on how cold it is that night. A number also argue that the volunteers don't often venture into dark parks or under non-visible locations — such as bridges, highway embankments or subway tunnels — and that the homeless are inherently transient and easy to miss during even a comprehensive survey.

For example, New York's annual count usually puts the number of street homeless in the low 3,000s but advocacy groups have suggested the actual total could be nearly double that. This year's count won't be known for months.

"It's a flawed measure and using it to make a comparison from one year to the next is deeply problematic since so many variables change," said Giselle Routhier, policy director of the Coalition for the Homeless in New York. "Doing it one day a year doesn't provide accuracy. And if you don't have an accurate read of the problem, you can't accurately identify solutions."

In New York, though the canvass-goers try to reach as many streets as possible, the city is too vast to cover fully in one night. So, a mix of city blocks with a high density of people and those of low density are chosen for the survey based on existing data and the results are inserted into a formula to extrapolate a final number.

Even some of the groups participating in the survey acknowledge that the system is far from ideal.

"It a good thing to do but also an imperfect system," said Eric Weingartner, a managing director of The Robin Hood Foundation. "It's such a fluid population that you're never going to know what you're going to find day in, day out. But it does give the city some snapshot to all those living on the street at one point in time."

But officials suggest that the one-night approach, which provides a snap-shot of each community's homeless situation, is the best that can be done considering current fiscal and manpower restraints.

In Dallas, a renewed effort was made "to canvass the whole area, not just known encampments," in order to get a more accurate total, said Cindy Crain, chief executive officer and president of Metro Dallas Homeless Alliance, the nonprofit that coordinates the survey of the homeless.

"They will go into a Waffle House, look behind commercial buildings, back in the Wal-Mart parking lot where you may see a car with all of their stuff in it," said Crain before Dallas conducted its survey last month. She says she asks volunteers to think, "It's cold tonight; where would you go?"

In some cities, the count comes at a time of increased scrutiny of homelessness. The Los Angeles City Council in November declared a homelessness crisis, paving the way to allow people to sleep on sidewalks and temporarily live in their cars while it continues to seek ways of housing an estimated 26,000 transients.

The city's homeless population has increased more than 10 percent over the past two years. In September, officials announced they planned to spend $100 million to eradicate homelessness.

"Capturing the data helps us advocate for funding and helps us allocate that funding so the money goes to the right places," said Naomi Goldman, spokeswoman for the Los Angeles Homeless Services Authority. "It helps us identify trends and issues."

Housing of Urban Development Secretary Julian Castro, whose agency doles out funding contingent on cities doing the survey, joined Mayor Bill de Blasio for New York's count that stretched into the early hours of Tuesday morning. De Blasio, whose administration is battling a rise in homelessness, walked several blocks and assured the homeless he encountered that the city was trying to help.

"It's very, very sad to see, especially in the middle of a city with so much wealth," de Blasio said. "This is not the way it should be."