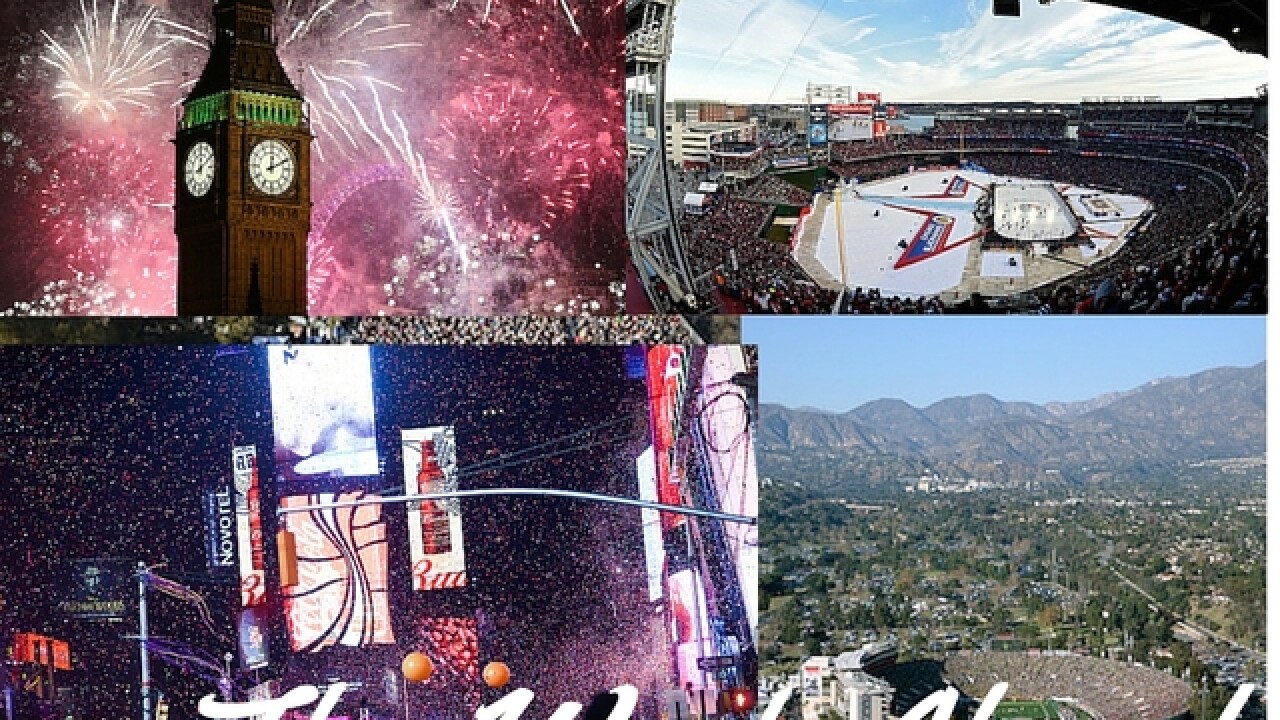 Still recovering from Christmas? Well hurry up! New Year’s is right around the corner.

NEW YEARS:
Of course, this week marks the last of 2015 with New Year’s coming at midnight on Friday. In New York, thousands will gather to watch the ball drop in Times Square, while enjoying performances from Wiz Khalifa, Carrie Underwood, Jessie J and Luke Bryan.

But that’s not the only object that will be “dropped” to mark the new year. In Panama City, Florida, a beach ball will drop at midnight — as will a music note in Nashville, a giant taco in Tucson and a giant potato in Boise.

On Friday morning, the 127th Rose Parade will take place in Pasadena, Calif., featuring marching bands and hundreds of floats adorned with flowers.

WEATHER:
A wild week of weather left dozens without homes during last week. Tornadoes and flooding tore through the southeast, stranding travelers and making for a dreary Christmas.

And while weather should return to normalcy this week, it will bring with it cold weather for much of the Midwest and northeast. After rain moves off the east coast and into the Atlantic, temperatures should return closer to normal December averages as the week progresses.

SPORTS:
Bowl Games
For decades, college football has ruled New Year’s Day, saving the most important matchups for prime time viewing on the first of the year.

But this year, the NCAA has chosen to hold the semifinal matchups of the College Football Playoff on New Year’s Eve — a bold move, considering many potential viewers will still be at work when No. 1 Clemson and No. 4 Oklahoma kick off the Orange Bowl at 4 p.m. ET on Thursday. In addition, there’s a decent chance that the Cotton Bowl (8 p.m. ET) matchup between Alabama and Michigan St. will run past midnight.

Though the important matchups will take place on Thursday, there will still be plenty of football to go around on Friday. Oklahoma State and Ole Miss will battle in the Sugar Bowl, Ohio State and Notre Dame will go at it in the Fiesta Bowl, and Stanford and Iowa will meet in the Rose Bowl.

Winter Classic
Nothing has done more to grow the popularity of the NHL in the past few years than the annual Winter Classic, an outdoor hockey game held on New Year’s Day. The Classic offers stunning visuals, classic rivalry matchups and brings the game back to its backyard roots.

This year’s classic between the Boston Bruins and Montreal Canadiens will take place will take place at Gillette Stadium in Foxborough, Mass., home of the Super Bowl champion New England Patriots. It’s the second time the Bruins have hosted the Winter Classic; in 2010 they defeated the Philadelphia Flyers in a spectacular 2-1 shootout at Fenway Park.

With the new year comes new offerings from Netflix — and fans of Ben Stiller will be more than happy with January’s new selections. Three of his moves (Meet the Parents, Meet the Fockers and Along Came Polly) will be available for streaming starting in the new year.

But one of Stiller’s most notable films — Zoolander — will be leaving Netflix on Friday. That’s strange, considering that a “Zoolander” sequel is set to debut in February.

Along with Zoolander, both American Psycho films, the Bourne Identity, Mission: Impossible, Gladiator and the first five Rocky films will all be leaving Netflix in January. Get binging!