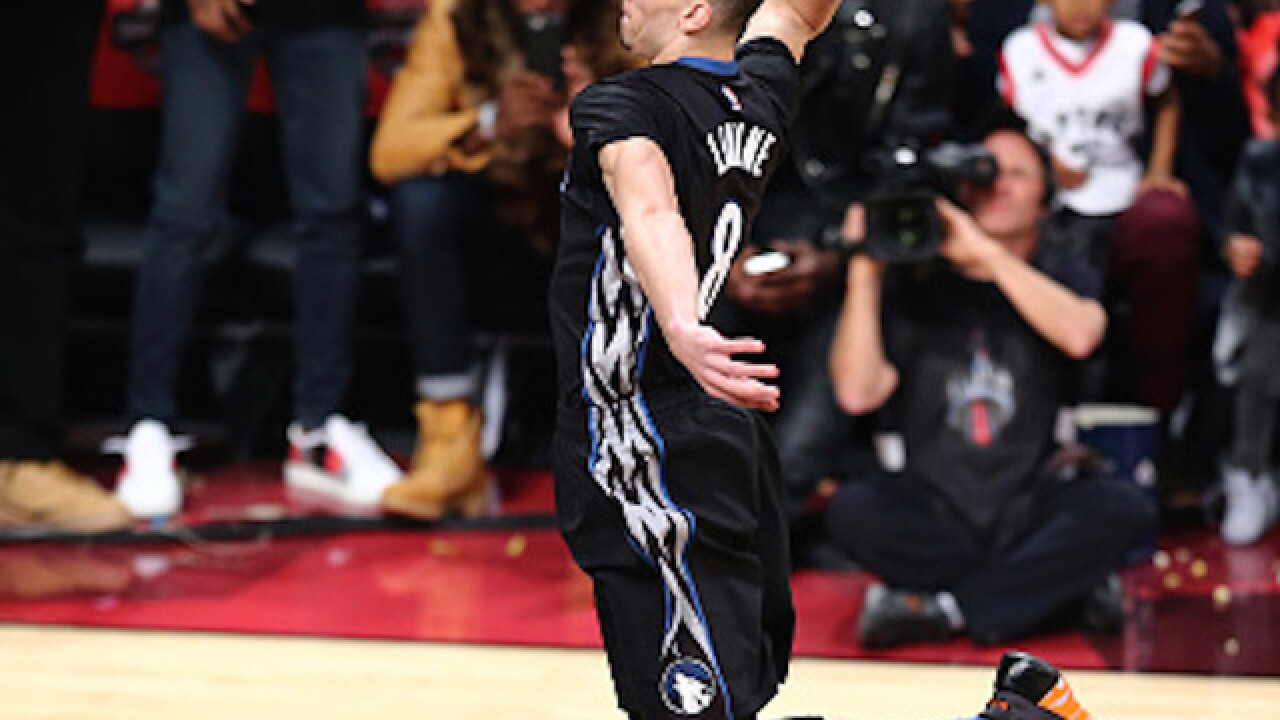 Vaughn Ridley
<p>TORONTO, ON - FEBRUARY 13: Zach LaVine of the Minnesota Timberwolves dunks in the Verizon Slam Dunk Contest during NBA All-Star Weekend 2016 at Air Canada Centre on February 13, 2016 in Toronto, Canada. NOTE TO USER: User expressly acknowledges and agrees that, by downloading and/or using this Photograph, user is consenting to the terms and conditions of the Getty Images License Agreement. (Photo by Vaughn Ridley/Getty Images)</p>

TORONTO (AP) — Aaron Gordon soared over his mascot, but nobody flies higher than Zach LaVine in the slam dunk contest.

LaVine was perfect just a little longer than Gordon and won a thrilling final event to cap off an entertaining NBA All-Star Saturday. LaVine captured his second straight dunk title — and a second trophy in two nights.

"I had to bring my A-plus-plus-plus game," LaVine said.

"He did two dunks that were just crazy with the mascots, jumping over them. We just kept pushing each other until the last dunk."

The 3-point crown stayed by the Bay — though with the other 'Splash Brother.' Klay Thompson pulled off a smooth-shooting surprise by beating Stephen Curry.

All-Star weekend so far has belonged to LaVine and the Minnesota Timberwolves, as rookie Karl-Anthony Towns showed big guys have skills, too.

The night — and the first two nights of this first All-Star weekend held outside the U.S. — ended with a celebration for LaVine, who won the MVP award in Friday night in the Rising Stars Challenge for rookies and second-year players.

He outlasted Gordon in a duel that needed two overtimes and ended only when there was literally no ball to use. Curry batted it down to other end of the court after he and the other NBA stars who were as captivated as the fans and celebrities sitting courtside charged onto the court when LaVine leaped from just inside the free throw line, put the ball between his legs in midair and slammed it down.

He and Gordon traded perfect scores of 50 for the previous few rounds after advancing to the final, but the Orlando Magic rookie mustered only a 47 in his last attempt.

But he may have had the most memorable dunks of the night with some help from the Magic's mascot — aptly named Stuff the Magic Dragon.

On Stuff's first assist, Gordon took the ball with one hand from the mascot, who was spinning around on a hoverboard, and did a 360-degree dunk.

He got another assist from Stuff on the next one, leaping high to take the ball, putting it under his legs — nearly in a sitting position in midair — and slamming it down with his left hand.

"Me and him are now like best friends, me and Stuff," Gordon said.

The only boos went to the judges, with the crowd thinking Shaquille O'Neal was a little stingy with a couple of 9s instead of perfect 10s.

"We were kind of mind-boggled a couple times because we got 49s and they were 50s," LaVine said.

A night that included an appearance by boxing ring announcer Michael Buffer ended with a couple heavyweight matchups. LaVine became the first repeat dunk champion since Nate Robinson, but Curry wasn't even the best on his own team after setting a final-round record last year.

This time, Thompson was so good he had clinched it even before the final ball on his final rack. He started to walk away after making first four — then turned and made that one, anyway.

"He definitely shot well tonight," Curry said. "I still think I can hold my own in the competition, but the way that he finished off that second round was amazing. So trust me, the pressure of knowing what number he had to hit and making five out of five was fun to watch."

Towns beat Boston Celtics point guard Isaiah Thomas to win the Skills Challenge, further validating the evolution of the big man from a plodding post player to a playmaking force.

In the first year that frontcourt players were allowed to compete against the guards in the event that combines dribbling, passing and perimeter shooting, Towns beat Golden State's Draymond Green and Sacramento's DeMarcus Cousins in the big men side of the bracket before edging Thomas in the finals.

"I'm glad I was able to help the bigs come out with this trophy," said Towns, the No. 1 overall pick in the June draft. "This is bigger than me. This is for all the bigs out there, with the game changing the way it is, to show that bigs can stand up with guards and skillwise."