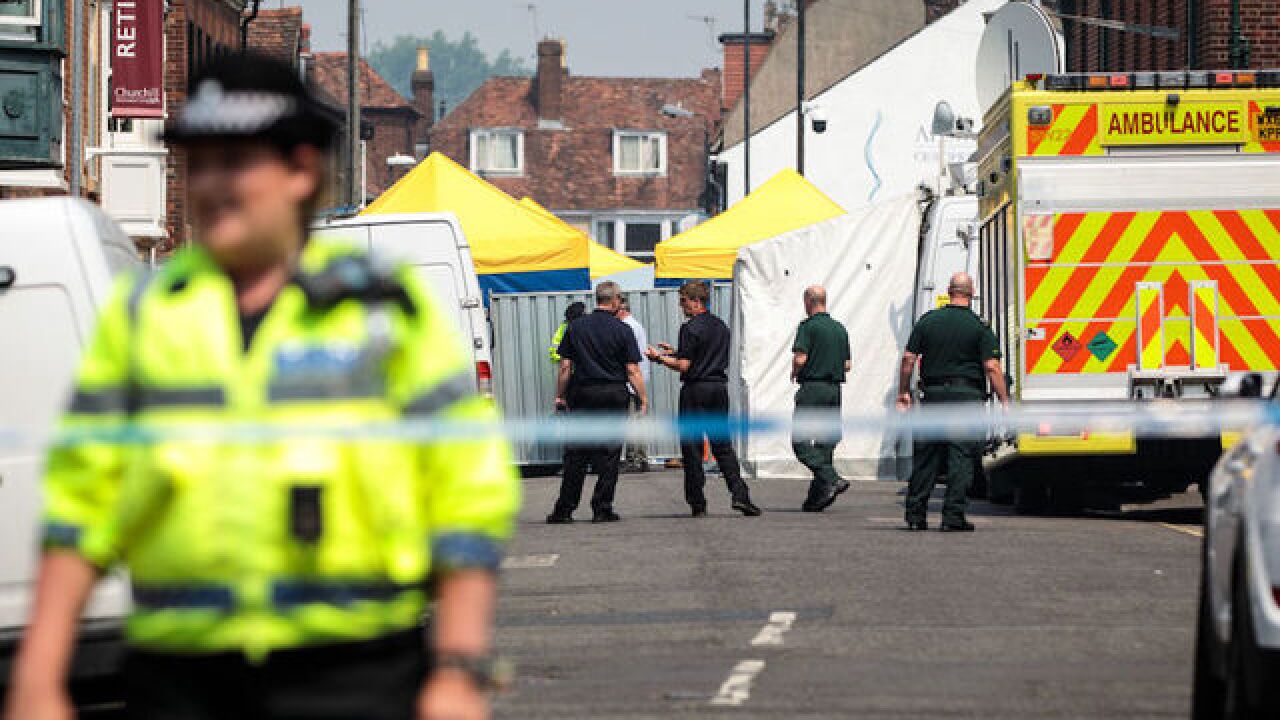 Image copyright 2018 Getty Images. All rights reserved. This material may not be published, broadcast, rewritten, or redistributed.
Jack Taylor
<p>The emergency services arrive at the John Baker House Sanctuary Supported Living after a major incident was declared when a man and woman were exposed to the Novichok nerve agent on July 6, 2018 in Salisbury, England. In March, Russian former spy Sergei Skripal and his 33-year-old daughter Yulia were poisoned with the Russian-made Novichok in the town of Salisbury. British Prime Minister Theresa May has accused Russia of being behind the attack on the former spy and his daughter, expelling 23 Russian diplomats in retaliation. </p>

The two suspects are named by the Crown Prosecution Service (CPS) as Alexander Petrov and Ruslan Boshirov, neither of whom is in the United Kingdom.

"Prosecutors from CPS Counter Terrorism Division have considered the evidence and have concluded there is sufficient evidence to provide a realistic prospect of conviction and it is clearly in the public interest to charge Alexander Petrov and Ruslan Boshirov ... with conspiracy to murder Sergei Skripal and the attempted murder of Skripal, his daughter Yulia, and police officer Nick Bailey," a CPS statement said.

The pair are also charged with the use and possession of the nerve agent Novichok contrary to the Chemical Weapons Act and causing grievous bodily harm with intent to Yulia Skripal and Nick Bailey, the statement said.

The two Russian nationals are believed to have been traveling under aliases, although they had genuine Russian passports with the identities of Alexander Petrov and Ruslan Boshirov, the CPS said during a briefing.

Traces of Novichok were found in the hotel room where the men were staying, the City Stay Hotel in Bow Road, east London, but not enough to warrant any cause for concern, the CPS said.

Assistant Commissioner Neil Basu, National Lead for Counter Terrorism Policing, told reporters that the March 4 poisoning of the Skripals had now been formally linked by UK investigators to the June 30 poisoning of Dawn Sturgess and Charlie Rowley, a couple living in Amesbury, near Salisbury. Sturgess died on July 8 as a result of her exposure to Novichok.

"It now forms one investigation," he said. "We do not believe Dawn and Charlie were deliberately targeted, but became victims as a result of the recklessness in which such a toxic nerve agent was disposed of.

"We know that Novichok was applied to the Skripals' front door in an area that is accessible to the public, which also endangered the lives of members of the public and emergency service responders."

Police released a series of CCTV images they say show the two men, believed to be aged about 40, arriving at London Gatwick Airport on March 2 and in Salisbury on March 3 and 4. The final images show the men leaving from London Heathrow Airport in the evening of March 4.

They also released images of the two men taken from their travel documents.

Basu appealed for anyone who knows the two men or saw them while they were in the United Kingdom in March to get in touch.

The update from the CPS and police came a day after the Organization for the Prohibition of Chemical Weapons, an international watchdog, confirmed that the nerve agent that killed Sturgess and sickened Rowley in Amesbury was the same one that was used to poison the Skripals, although it did not name the substance.