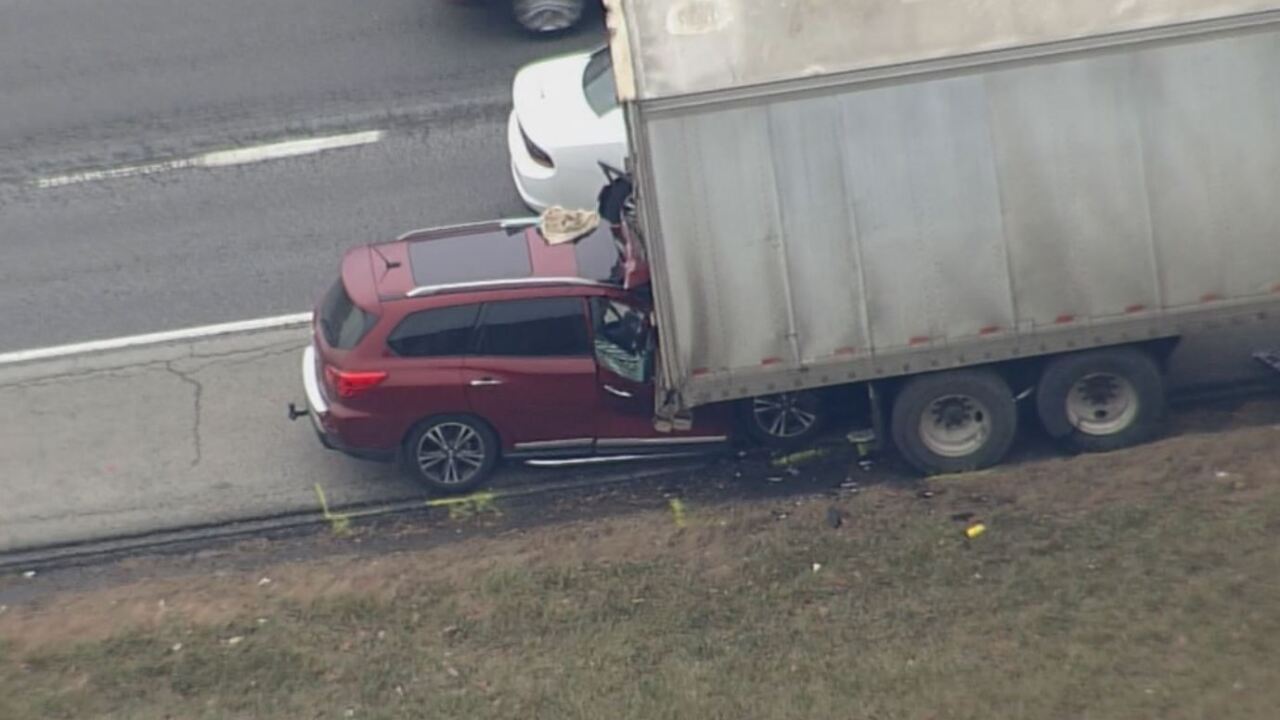 INDIANAPOLIS — Efforts to stop deadly underride crashes have stalled out on Capitol Hill, frustrating parents and safety advocates who say federal legislation would save lives.

An underride crash is when a car slides underneath a large truck or semi-trailer — a crash that is often fatal.

WATCH | Vehicle hit and crushed underneath a semi truck

The bill would also ensure that the annual inspection for all large trucks includes underride guards as part of the inspection and would require the Department of Transportation to review underride standards every five years to evaluate advancements in technology.

But, the legislation has been sitting in the U.S. Senate Committee on Commerce, Science and Transportation for the past year without lawmakers taking any action.

Marianne Karth has been pushing lawmakers to pass the Stop Underrides Act after losing two of her daughters AnnaLeah and Mary in an underride crash.

“It is very frustrating to know that every day the bill is delayed more people will continue to die, more families will be devastated by unimaginable grief,” Karth said. “And why is that, why aren't we acting decisively to save lives?”

U.S. Senator Todd Young, R-Indiana, is a member of the U.S. Senate Committee on Commerce, Science and Transportation.

“My heart goes out to the families impacted by those tragic accidents,” Young said. “We need to do all we can on Capitol Hill to continuously improve auto safety.”

Young pointed out truck manufacturers are already improving the strength of underride guards.

“The automobile manufacturers employ tens of thousands of Hoosiers,” Young said. “There’s legislation that is up here on the Hill, a number of different versions frankly that we are looking at and we’re going to find a path forward to improve auto safety.”

“Absolutely, I like to roll my sleeves up, and if necessary my pant legs,” he said. “Seeing a crash test scenario would be interesting to me.”

Karth and Lois Durso have been calling Senator Young’s office urging him to support or co-sponsor the Stop Underrides Act.

In 2004, Roya, Durso’s daughter, was killed in a wreck when she was riding in a car driven by her fiancé that rammed underneath a tractor-trailer on a snowy road.

“There is an urgency to move the Stop Underrides Act forward,” Durso said. “For decades, passenger vehicles have slid under the body of tractor-trailers resulting in countless fatalities while legislators have been asleep at the wheel. Delays are only costing more lives.”

Call 6 Investigates called the U.S. Senate Committee on Commerce, Science and Transportation Thursday and learned the STOP Underrides Act is not scheduled for a hearing, and one is not expected until the new Congress is seated in January.

A three-month investigation by Call 6 Investigates revealed federal standards for underride guards are not be enough to keep motorists safe.

Federal lawmakers are concerned because underride victims often suffer severe head and neck injuries, including decapitation, even at low speeds.

During 2011, large truck rear impacts comprised 19 percent of the fatal two-vehicle collisions between large trucks and passenger vehicles, according to the Truck Safety Coalition.

In 2011, 260 people were killed when they crashed into the rears of trucks, according to the Insurance Institute for Highway Safety, which has been pushing the federal government to adopt tougher standards for underride guards.