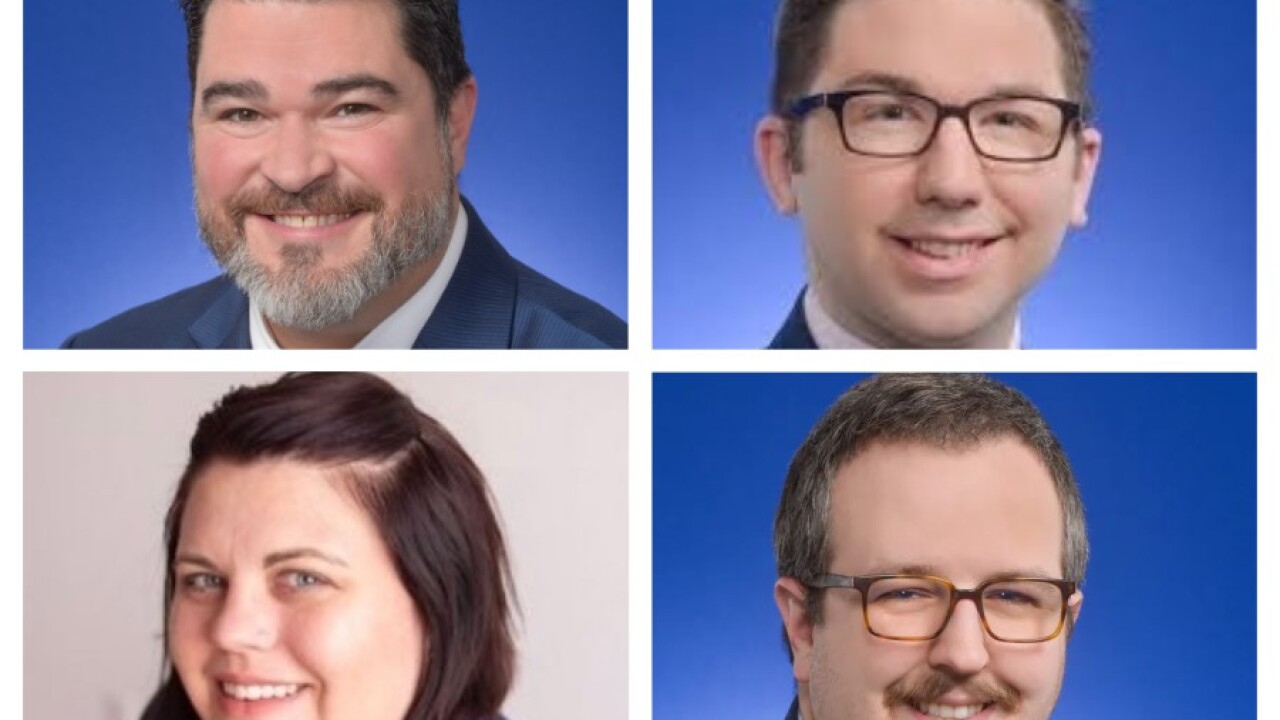 INDIANAPOLIS — Keith Potts has a story to tell.

As an openly gay candidate running for City-County Council, he knows a little bit firsthand about "Indy Welcomes All," as the slogan on countless storefront windows goes.

Earlier this year, Potts said he was called an anti-gay slur and followed while getting off a bus.

"I'm lucky that I walked away from that with only internal pain," he said. "I was not actually hurt. It just put a speed bump in my evening that I didn't expect."

That "speed bump," Potts says, does not point to an epidemic in Indianapolis, but instead shows how important diversity of backgrounds is with local government and decision making.

And as one of four members of the LGBTQ community running for a council seat, he hopes to be a part of that future decision making.

Potts, Ali Brown, Ethan Evans and Zach Adamson, all Democrats, are all running for different seats across the city.

They're all part of a potentially historic class. The 2019 City-County Council election is believed to have the most openly LGBTQ candidates in Indianapolis history.

None of them are running solely on their sexuality. They're running because they want to fix potholes and bring jobs to their potential constituents, just like everybody running for City-County Council.

Ali Brown could also be part of that diversity. She is running to be the first openly LGBTQ woman on the City-County Council.

Brown said she can name the handful of LGBTQ people in the state who have been elected.

"We really just need to have people who represent all sorts of communities elected," she said. "Because that's how we empower communities. Kids believe when they see."

Brown said she wants her 16-year-old nephew who recently came out to know that his identity isn't an issue.

She said a woman reached out to her after her coming out story was published online. The woman said she was happy it was posted because she didn't know how to phrase her own struggles.

"That really made a difference to me," Brown said. "I don't think of somebody to be looked up to. I think of myself as somebody who does the work. I'm a workhorse, not a showpony.

But if through that work, I help enable people to be their true selves and to be able to accomplish greater things and show that kindness wins, then that's the example I want to leave."

Brown, who is bisexual and married to a man, said she feels safe and welcomed in Indianapolis. But she may feel differently if she were married to a woman. She said she gets weird looks just walking with her husband - because she's six inches taller than him.

"They tell my husband he's brave for marrying somebody like me, which is just the weirdest thing a stranger can tell you because I'm not a dragon. I have assumed straight privilege. They see my husband and I, and we have a son and they just see this. ... I married him because I fell in love with his soul, not with his gender."

Evans is openly bisexual and has been out since 2013. He said he's spoken with the other three LGBTQ candidates, and they've all been supportive of each other throughout their respective campaigns.

"It does look to be a very historic moment in our city's history," he said. "No matter what, we've made a big step toward LGBTQ representation at the city level here in Indianapolis and toward LGBTQ equality."

The political landscape, especially in Indiana, has changed with regard to LGBTQ candidates over the past few years. There is an openly gay Hoosier running for President.

But Potts said Indiana, like Indianapolis, still has opportunities for progress.

"Our state definitely has room to grow with regard to how we treat, how we respect and how we embrace members of the LGBTQ community," Potts said. "And I think they could look to our Indianapolis municipal government, just down the road, for some examples on how to do that."

Adamson has the unusual position of being the only LGBTQ member currently sitting on the council. He was first elected in 2011, then won reelection in 2015.

In the term before Adamson was first elected, the city passed a human rights ordinance by a narrow 15-14 vote. The ordinance attempts to prevent people from being denied opportunities in employment, education, public accommodations and more based on their race, color, age, origin, disability, sexual orientation or gender identity.

"Going forward into my term, we were fighting RFRA and constitutional bans and the issue of LGBT equality, equity and justice have always been front and center on the issues," he said.

But in the last few years, Adamson said the level of acceptance in the council has shifted.

"The one difference this does make, is it creates a place at the table for dialogue to happen," Adamson said. "People who can't get with that environment usually find other things to do. Which is a good thing, in all. I don't have those kinds of conversations with my colleagues on these issues that I used to have when I first got elected."

Instead, they work on day-to-day, quality of life issues for Indianapolis residents.

But his election, and potentially more in 2019, sent a signal that being LGBTQ is no longer a disqualifier for office, Adamson said.

A wider change has also been apparent in his time in Indianapolis. When Adamson moved to the city in 1990 at the age of 19, the Indy Pride festival was much smaller. It was found on Monument Circle, instead of the much larger Military Park where it takes place now.

"Throughout the day, there would be about 200 protesters that would surround the Circle," Adamson said. "Some with baseball bats, some with signs that were just horrific in nature. It was advertised in the advertising for Pride during those periods that you should not attend Pride alone. Always walk in at least pairs, if not larger groups to avoid being assaulted or injured or something."

There are thousands of people celebrating every year, and there are no longer dozens of people protesting the event with hateful homemade signs.

In his first win, Adamson ran as an openly gay man. His position was an at-large seat, meaning the entire county would vote on a few candidates.

He came in third, with the top four candidates winning seats. Adamson said it sent a signal that times were changing in Indianapolis.

He cited a line from a 1962 Martin Luther King Jr. speech, who quoted a slave preacher at the time by saying he "didn't quite have his grammar right."