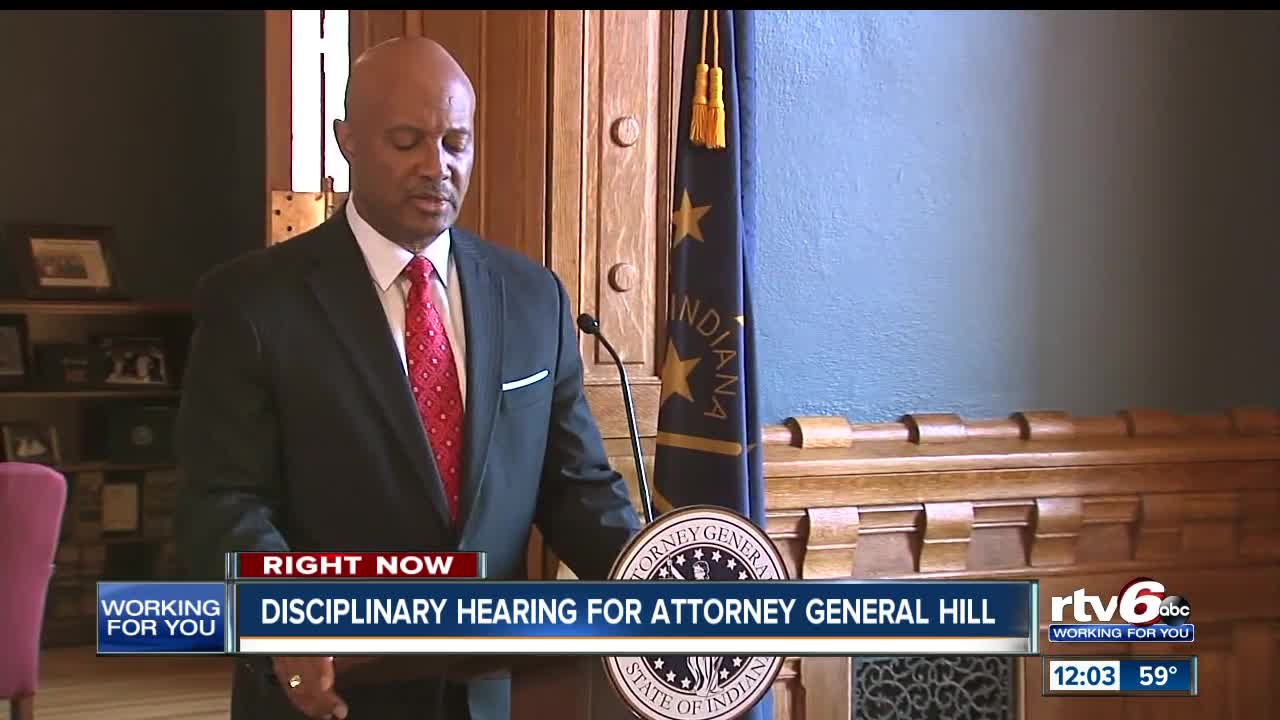 In the first day of the Indiana Supreme Court Disciplinary Commission hearing for Attorney General Curtis Hill, a state lawmaker recounted her story and accusations that Hill touched her inappropriately at a bar in March 2018. 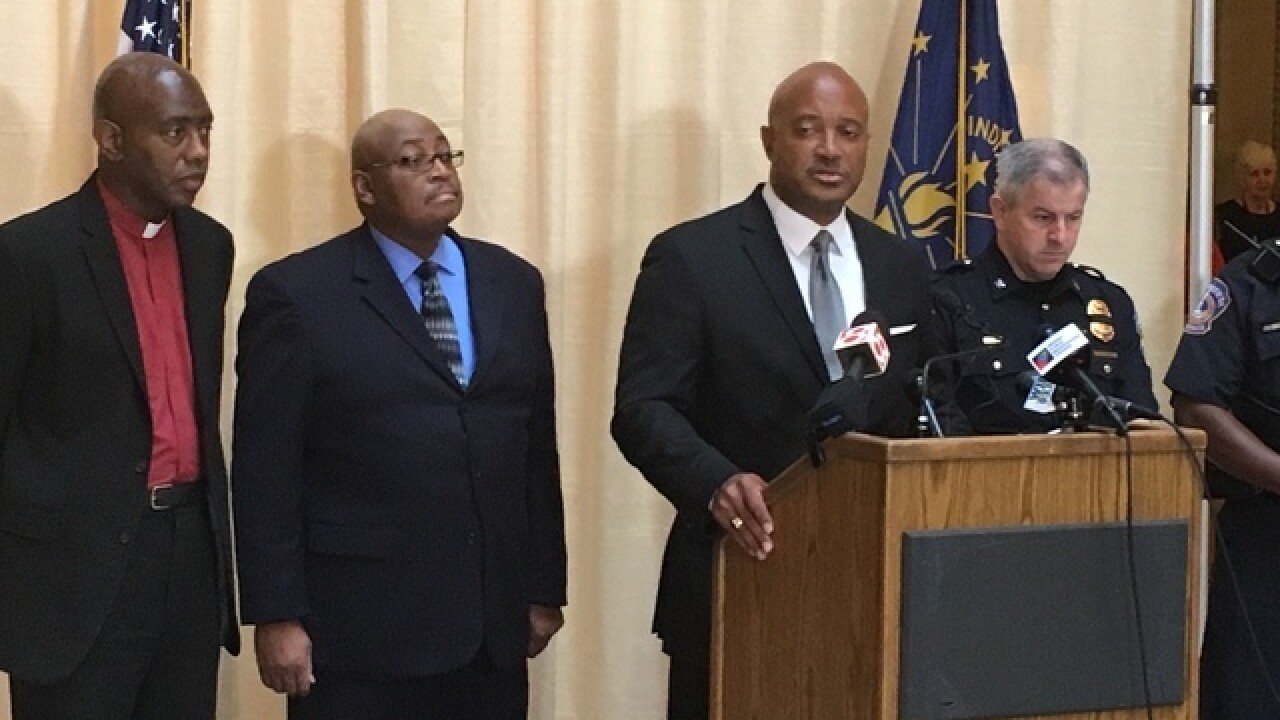 INDIANAPOLIS — In the first day of the Indiana Supreme Court Disciplinary Commission hearing for Attorney General Curtis Hill, a state lawmaker recounted her story and accusations that Hill touched her inappropriately at a bar in March 2018.

The hearing, expected to last all week, is to determine if Hill faces any legal discipline for the accusations. The Indiana Supreme Court will decide whether to impose a penalty, ranging from a reprimand to removal of Hill's law license. Hill has denied the allegations of inappropriate touching.

In opening statements Monday, the Disciplinary Commission (or the prosecution in this case) said it would prove that Hill touched the four women inappropriately on the night of March 15, 2018. Attorney Seth Pruden said the women will testify and describe how they felt “shock, shame, humiliation and embarrassment.”

In the defense’s opening statement, attorney Don Lundberg said Hill was “friendly and engaging” on the night of the party. He also criticized the process of the hearing, saying, “We are taking a wrong and dangerous turn.”

The first witness Monday was Rep. Mara Candelaria Reardon, D-Munster. In her testimony, she said she arrived at the Sine Die party at AJ’s Lounge about 1 a.m. with two other people. Candelaria Reardon said she and Hill saw each other and exchanged pleasantries at the party.

She said he then leaned in, as if he couldn’t hear her, and put his hand on her back, slid it down her back, then grabbed her buttocks. She said he had his thumb inside her dress, while his other fingers were outside. Candelaria Reardon said Hill appeared to be intoxicated, based on how he smelled and his glassy eyes.

She testified that she believes his was intentional.

“You don’t just fall into somebody’s dress,” she said.

She said she removed herself from the interaction, and told a Republican at the party, “Your boy is a f---ing creep.”

Candelaria Reardon said she first wanted to discuss the incident privately with Hill but changed her mind when she found out other people had similar accusations from the party.

She also discussed the investigation made by the Indiana House, which she says she was never interviewed for, except a meeting with Speaker Brian Bosma. She also discussed her frustration at her name becoming public from a memo leaking to the media.

When she was questioned by the defense, attorney Jim Voyles asked her about the dress she wore the night of the party. She was asked to describe it, and said the back was open from the shoulders to the beltline.

Voyles asked her about her earlier testimony that she considers the Sine Die party to be a work-related function. He asked if it would be subject to the Access to Public Records Act, and whether it was on an official legislative calendar. Candelaria Reardon said she wasn’t a lawyer and couldn’t answer those questions.

He also asked about what she wrote in an Equal Employment Opportunity Commission complaint, where she said Hill’s hand was in her dress. He asked her to explain the discrepancy between saying his hand in her dress and his thumb in her dress. Candelaria Reardon said she considered it offensive no matter what, and said the thumb is part of the hand.

The next witness was Hill’s second accuser, Samantha Lozano, a legislative assistant for Indiana House Democrats.

During the conversation, Lozano said she told him, "It's really hot in here." She said he responded by saying, "Yes, you're really hot."

"I thought that was awkward and really uncomfortable," Lozano said Monday.

Lozano said she gave her friend a look to get her out of the situation.

"It's a look women give each other when they need help,” Lozano said.

Lozano’s voice started breaking when she discussed why she wanted to remain anonymous.

"I wasn't ready for the media to know, or anybody to know,” she said. “I know it shouldn't matter, but I didn't want people to blame me for drinking or being at the party that night."

When the defense questioned Lozano, Attorney Jennifer Lukemeyer asked her about drinking before leaving the Statehouse on the night of the party. Lozano said people were having cocktails and wine in the offices.

Lozano was asked what she drank at the party.

"I'm not judging you,” Lukemeyer said. “I'm trying to get a sense of the evening."
Lukemeyer, like Voyles with Candelaria Reardon, asked about the Sine Die party as a legislative event. She asked Lozano if she was paid to go to the event. Lozano said no, and that nobody is required to go.

Next, Niki DaSilva was called up. DaSilva was a legislative assistant for the Indiana Senate Republicans, but she has since left the position.

She said she was at the bar when Hill walked up to her and said, "Don't you know how to get a drink? You have to show a little skin."

DaSilva was the friend Lozano described earlier – the one she gave a look to. She described the same interaction Lozano did.

“I could tell she was uncomfortable," DaSilva said.

DaSilva then said Hill put his hand on her lower back. She said she doesn't recall how long his hand was there. DaSilva said she reached behind her back to try and remove his hand.

DaSilva said she eventually came forward to join the other accusers, because she wanted to give legitimacy to the other accounts.

She was asked if she regrets coming forward.

When the defense questioned her, Lukemeyer asked how much she drank that night at the party. DaSilva said she had two drinks that night in her hands but didn't finish either of them. She said she doesn't remember seeing Hill physically touch Lozano, but said he was in close proximity to her.

Lukemeyer discussed the "show some skin" comment at the bar with DaSilva. She asked DaSilva who the comment was directed at, the bartender or the women.

“To me, it felt like an eternity,” DaSilva said.

She said during the event, Hill pulled a barstool next to her and slowly rubbed her back. When asked what he was saying at the time, she testified that she doesn't remember because she was thinking about how to get out and about what others would think. Brock said she was worried people would think she was enjoying the attention.

Brock said she mouthed "Help me" to a friend, who helped get her out of the situation where Hill was rubbing her back.

Brock said Sen. Greg Taylor, D-Indianapolis, saw the incident take place, but didn’t do anything to stop it. She said he later apologized for not stopping it. She said he told her that he didn’t know what to do, and that she was like a little sister to him.

She said she had decided not to make a report, because “nothing happens” when women report these incidents.

The hearing will resume Tuesday at 9 a.m.