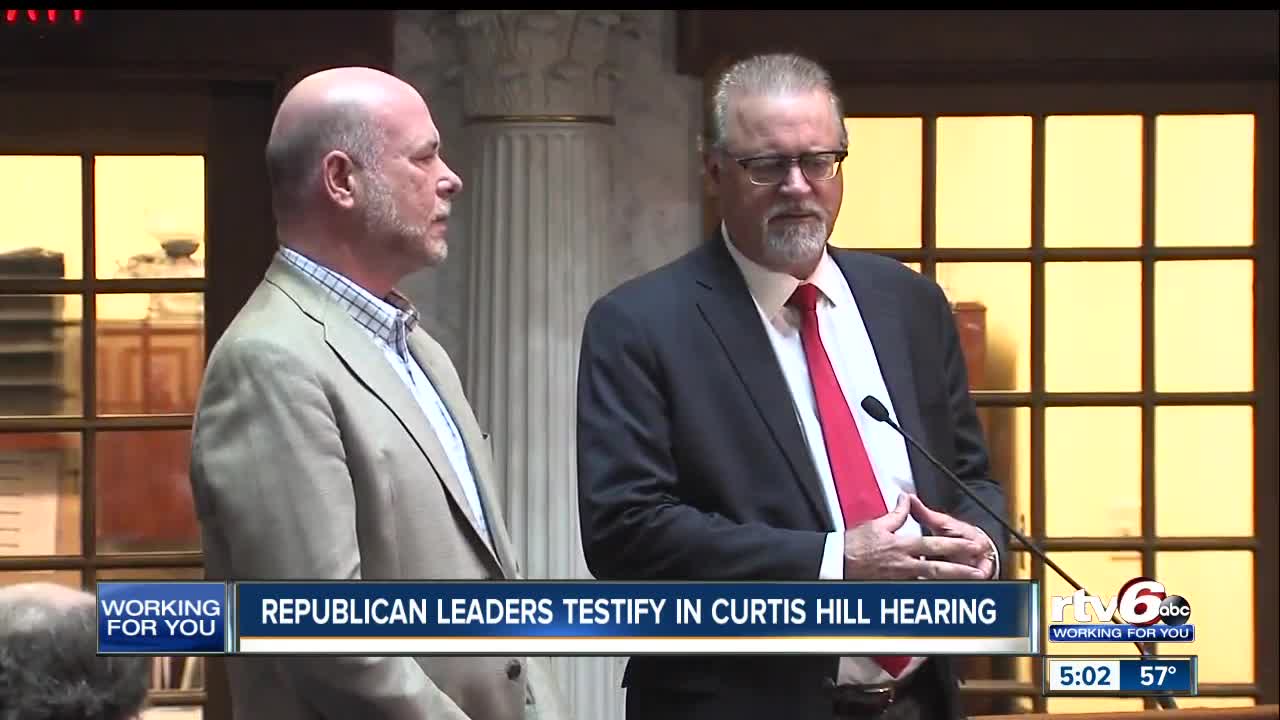 It took three days for Attorney General Curtis Hill to change his tone from apologetic to defiant over the sexual misconduct allegations against him, according to the testimony of two witnesses who spoke Tuesday afternoon.

INDIANAPOLIS — It took three days for Attorney General Curtis Hill to change his tone from apologetic to defiant over the sexual misconduct allegations against him, according to the testimony of two witnesses who spoke Tuesday afternoon.

House Speaker Brian Bosma, R-Indianapolis, said in the second day of the Indiana Supreme Court Disciplinary Commission hearing that when Hill found out the Indianapolis Star was going to write a story about Hill’s alleged behavior at a bar in March 2018, he switched to “full-on, nothing happened.”

The hearing, expected to last all week, is to determine if Hill faces any legal discipline for the accusations. The Indiana Supreme Court will decide whether to impose a penalty, ranging from a reprimand to removal of Hill's law license. Hill has denied the allegations of inappropriate touching.

Bosma said he first found out about the allegations against Hill on May 14, the day of the 2018 Special Session. He said Rep. Mara Candelaria Reardon, D-Munster, requested a meeting and told him and others in the room of her allegations.

He said he and then-Senate President Pro Tem David Long believed they had a workplace issue with their employees. He said they met with the two Democratic leaders of the House and Senate the next day, and they decided to interview the people involved.

Two female House staffers interviewed the four women, as they did not want to be interviewed by a man.

After the interviews, the four had agreed to reconvene on July 2 to meet with Hill to present to him what they found out, Bosma said.

But that plan changed when he found out a reporter from the Indianapolis Star had been asking questions about the incident. Instead, Bosma and Long decided to call Hill to let him know about the investigation.

In the call on June 29, Bosma said they asked him not to attend any future legislative events. He said they also instructed him to not reach out to any of the women, even to offer an apology. They told him if he did, it may be considered retaliation.

Both Bosma and Long independently testified that Hill told them he had a lot to drink that night, saying that multiple times in the short phone conversation. Bosma said Hill apologized to them for having to deal with the situation.

Bosma said he asked Hill if he would have anything to say to the women, trying to elicit an apology. Bosma testified that Hill said he was “troubled" and offered an apology to anybody offended.

When he reported the apology back to the women, he said they were pleased any action was taken. He said the women said they were satisfied, and there was no more action to be taken. Bosma said Candelaria Reardon was less pleased than the other women, but still satisfied.

When Bosma found out the IndyStar had a copy of the confidential letter, he said he “muttered a few words under his breath.”

At an in-person meeting with Hill three days after the phone call, Bosma said Hill changed his tone when he found out the IndyStar had a copy of the memo. Bosma said either Hill or his chief deputy Aaron Negangard then said, "You know we're going to have to attack this investigation now."

Long said he remembers Hill saying, “I’m going to have to defend myself and I intend to.”

He said Hill asked for a copy of the memo, but Bosma declined because it was confidential.

Bosma testified that at the end of the meeting, he shook Hill’s hand and gave him a small hug. Bosma said Hill told him, “We’ll get through this.”

Bosma said that was the last meaningful conversation they’ve had since. They’ve sat next to each other at a funeral, but only exchanged pleasantries.

He said he still considers Hill a friend, even if Hill doesn’t anymore.