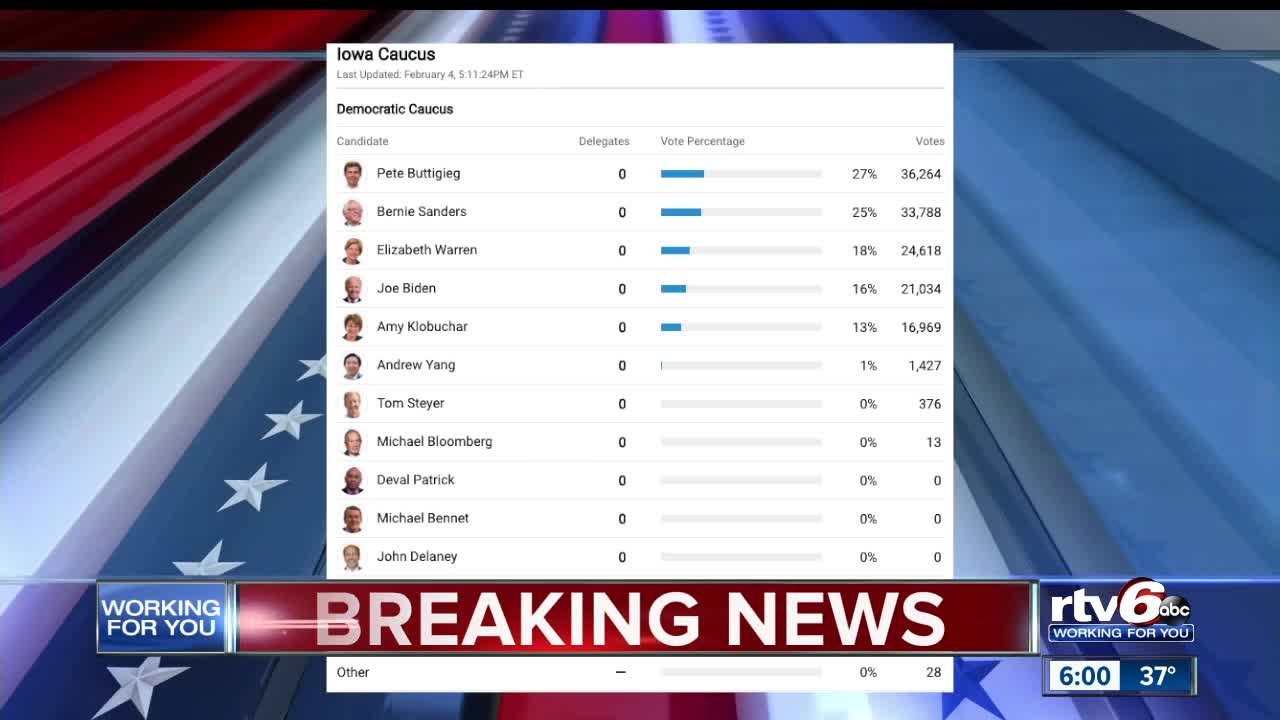 As results from the Iowa Democratic caucus are starting to be released, former South Bend Mayor Pete Buttigieg and Bernie Sanders are ahead in the results. 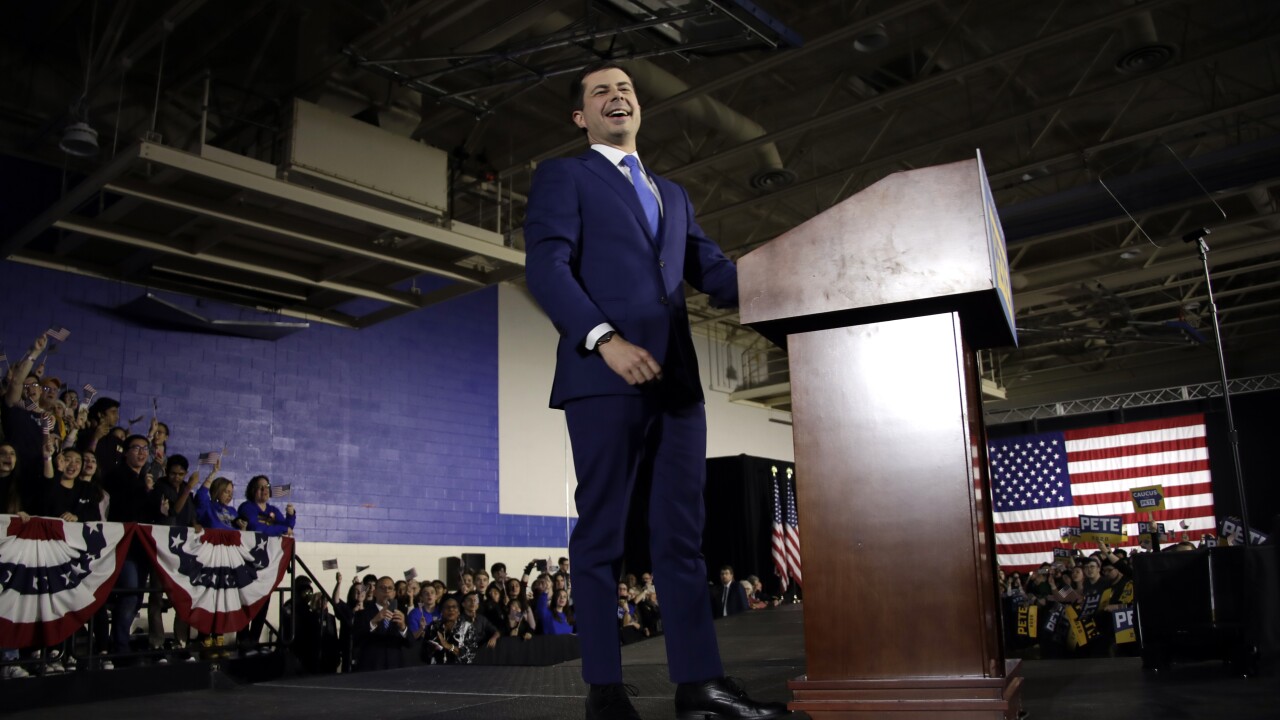 DES MOINES, Iowa (AP) — As results from the Iowa Democratic caucus are starting to be released, former South Bend Mayor Pete Buttigieg and Bernie Sanders are ahead in the results.

The partial release of results from the Iowa Democratic Party come on a chaotic day after the first-in-the-nation presidential caucus on Tuesday.

Buttigieg and Bernie Sanders were ahead in the initial results released by the Iowa Democratic Party, with Elizabeth Warren, Joe Biden and Amy Klobuchar trailing behind in the tally of State Delegate Equivalents.

The data, made public for the first time nearly 24 hours after voting concluded, reflected the results of 62% of precincts in the state.

While campaigns were eager to spin the results to their advantage, there was little immediate indication that the incomplete results eased the confusion and concern that loomed over the opening contest of the Democrats 2020 presidential primary season.

It was unclear when Iowa's full results would be released.

During a private conference call with campaigns earlier in the day, state party chairman Troy Price declined to answer pointed questions about the specific timeline -- even whether it would be a matter of days or weeks.

“We have been working day and night to make sure these results are accurate," Price said at a subsequent press conference.

The leading candidates pressed on in next-up New Hampshire, which votes in just seven days, as billionaire Democrat Michael Bloomberg sensed opportunity, vowing to double his already massive advertising campaign and expand his sprawling staff focused on a series of delegate-rich states voting next month.

The party's caucus crisis was an embarrassing twist after months of promoting the contest as a chance for Democrats to find some clarity in a jumbled field with no clear front-runner. Instead, after a buildup that featured seven rounds of debates, nearly $1 billion spent nationwide and a year of political jockeying, caucus day ended with no winner, no official results and many fresh questions about whether Iowa can retain its coveted “first” status.

Iowa marked the first contest in a primary season that will span all 50 states and several U.S. territories, ending at the party’s national convention in mid-July.

Campaigning in New Hampshire on Tuesday, Warren said she was “feeling good” about her performance in Iowa but questioned the state party's plans to release partial results.

“I just don't understand what that means, at least half of the data. I think they ought to get it together and release all the data,” she said.

The Sanders' campaign told supporters that its internal monitoring showed him in the lead with nearly half the vote in. Sanders himself said late Monday, “Today marks the beginning of the end for Donald Trump."

“So we don’t know all the results, but we know by the time it’s all said and done, Iowa, you have shocked the nation,” he said before leaving Iowa. "By all indications, we are going on to New Hampshire victorious.”

Biden said he was “feeling good” and predicted the results would be close.

The party told campaigns Tuesday that the problem was a result of a “coding issue in the reporting system” that it said had since been fixed. It said it had verified the accuracy of the collected data and said the problem was not a result of “a hack or an intrusion."

A Biden campaign representative objected to the party’s plan to release partial results before checking them against paper records, saying in the conference call that the plan didn't address “growing reports” about problems on caucus night, such as precinct captains unable to get through on the phone to report results.

“The stories and the problems are just multiplying so presumably you’re going to have some way of addressing that and explaining to us as you release these partial results why you’re comfortable,” Biden campaign attorney Dana Remus said. “You need to have enough transparency that other people feel comfortable about it now and we’re just not there right now."

Sanders adviser Jeff Weaver thanked party officials, and encouraged other campaigns not to undermine the party.

“Folks who are just trying to delay the return of this because of their relative positioning in the results last night, I think that’s a bit disingenuous,” Weaver said.

For the first time, the Iowa Democratic Party reported three sets of results: a tally of caucusgoers’ initial candidate preference; vote totals from the “final alignment” after supporters of lower-ranking candidates were able to make a second choice, and the total number of State Delegate Equivalents each candidate received.

The Associated Press will declare a winner based on the number of state delegates each candidate wins, which has been the traditional standard.

Early polling had suggested Sanders entered the night with a narrow lead, but any of the top four candidates — Sanders, Biden, Warren and Buttigieg — was positioned to score a victory. Sen. Amy Klobuchar, who represents neighboring Minnesota, was also in the running, while outsider candidates including entrepreneur Andrew Yang, billionaire activist Tom Steyer and Hawaii Rep. Tulsi Gabbard lagged behind.

Sensing opportunity amid the chaos, Bloomberg's campaign announced plans to double its national television advertising spending — which has already exceeded $100 million — as it expands its paid staff to more than 2,000 people.

Bloomberg is looking to next month, having decided to bypass Iowa's contest and the three other states voting this month in favor of the delegate-rich states in March.

“After more than a year of this primary, the field is as unsettled as ever,” Bloomberg spokeswoman Sabrina Singh said. “No one has made the sale or even come close to it. Meanwhile, Mike is taking the fight to Trump every day, doubling down on the national campaign strategy we've been running from the beginning.”

Beyond 2020, the debacle invited fresh criticism about Iowa caucuses, a complicated set of political meetings staged in a state that is whiter and older than the Democratic Party. Many used the moment to question whether it was a quaint political tradition whose time had passed.

The party has tried to accommodate critics before, this year by promising to report three different data points about voters' preferences, presumably improving transparency. But the new system created new headaches.

“I think Iowa is a dumpster fire,” said Dick Harpootlian, a South Carolina state senator and longtime Biden supporter, who served as an Iowa precinct captain for Biden on Monday.

Copyright 2020 Scripps Media, Inc. The Associated Press contributed to this report. All rights reserved. This material may not be published, broadcast, rewritten, or redistributed.