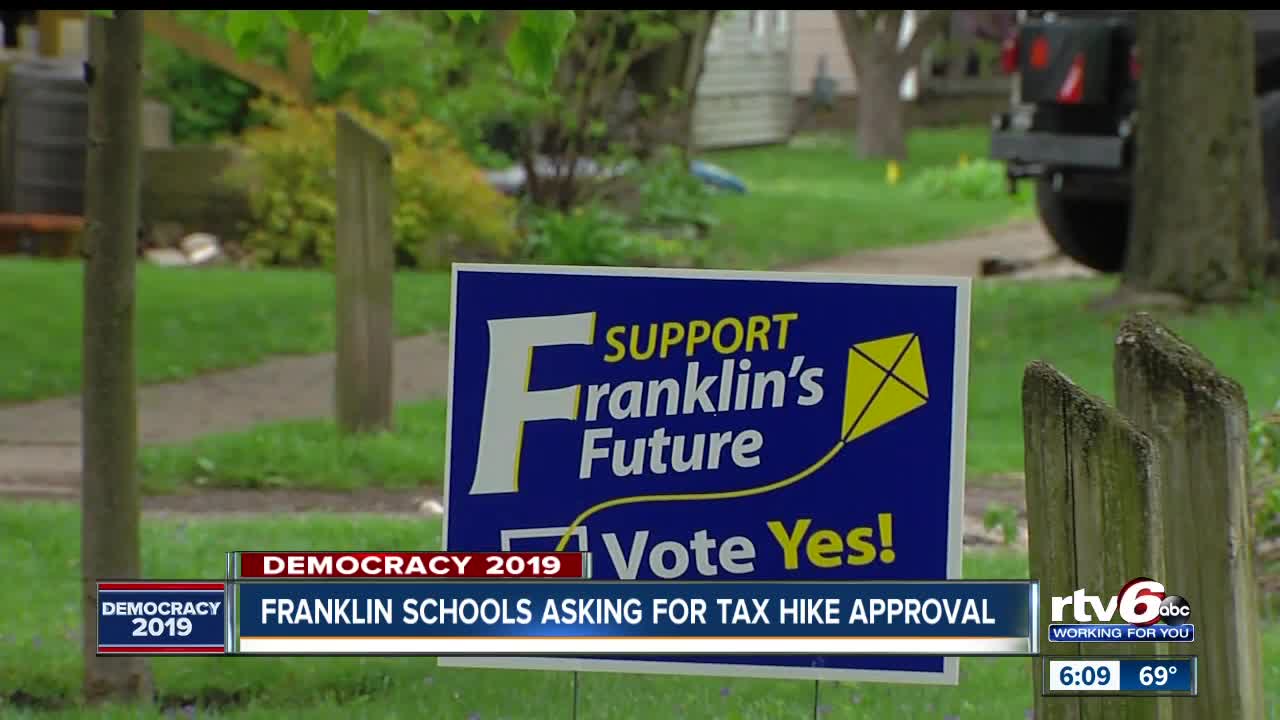 Franklin Community Schools are asking voters to pass a tax hike request for two primary purposes. The first purpose being teachers salaries and the second being mental health support.

INDIANAPOLIS — Not only will voters be choosing mayoral and council candidates on election day Tuesday, May 7, but voters in three central Indiana school districts are being asked to approve money requests.

One of those is Franklin Community Schools, where leaders are asking voters to pass a tax hike request for two primary purposes. The first purpose being teachers salaries and the second being mental health support.

For the eight schools and more than 5,000 students in the Franklin Community School Corporation, the money request will generate $3.5 million per year.

"We are not able to keep up with salaries, with teachers and support staff," David Clendening, Franklin Community Schools superintendent, said.

In fact, the documentation provided to RTV6 by the district shows Franklin Community Schools have the second-lowest paid teachers in the region. That's something people in the community say has to change.

"I think it is the most important thing when we're talking about schools," John Wales, a Franklin resident, said. "Teachers are the real reason our schools are successful or not."

The district also plans to use some of that money for mental health assistance and resources for students.

"Now we have school counselors, but they can't get to their job and deal with the mental health side," Clendening said. "We're seeing kids that are both acting out and, unfortunately, we're seeing anxiety and stress playing out in the classroom."

The district says they need be able to have specific staff members provide and focus on mental health. The referendum creates a 23-cent tax hike for every $100 of assessed property value.

"We've been fortunate in Franklin that we've had a great set of teachers that have unfortunately gone woefully underpaid for too long, and it's time to correct that," Clendening said.

No one against the referendum wanted to be interviewed on camera, but most told us they don't have students in the district anymore, so they shouldn't have to pay. On the other side, those in support of the request say the community must fund the schools.

"When we pay our taxes for our local community schools, we're paying for the community's children, not just our own," Wales said. "As an example, I don't have kids in the district any longer as well. I have a granddaughter, but I don't have kids anymore. But I'm glad to pay the extra tax."

So, what happens if it doesn't get passed?

"We would look dramatically different," Clendening said. "One example, we have class size average in elementary of 1 to 25, if we don't pass the referendum, we won't be able to keep 1 to 25 in the classroom."

The referendum will be on the ballot in Franklin on Primary Election Day, May 7.