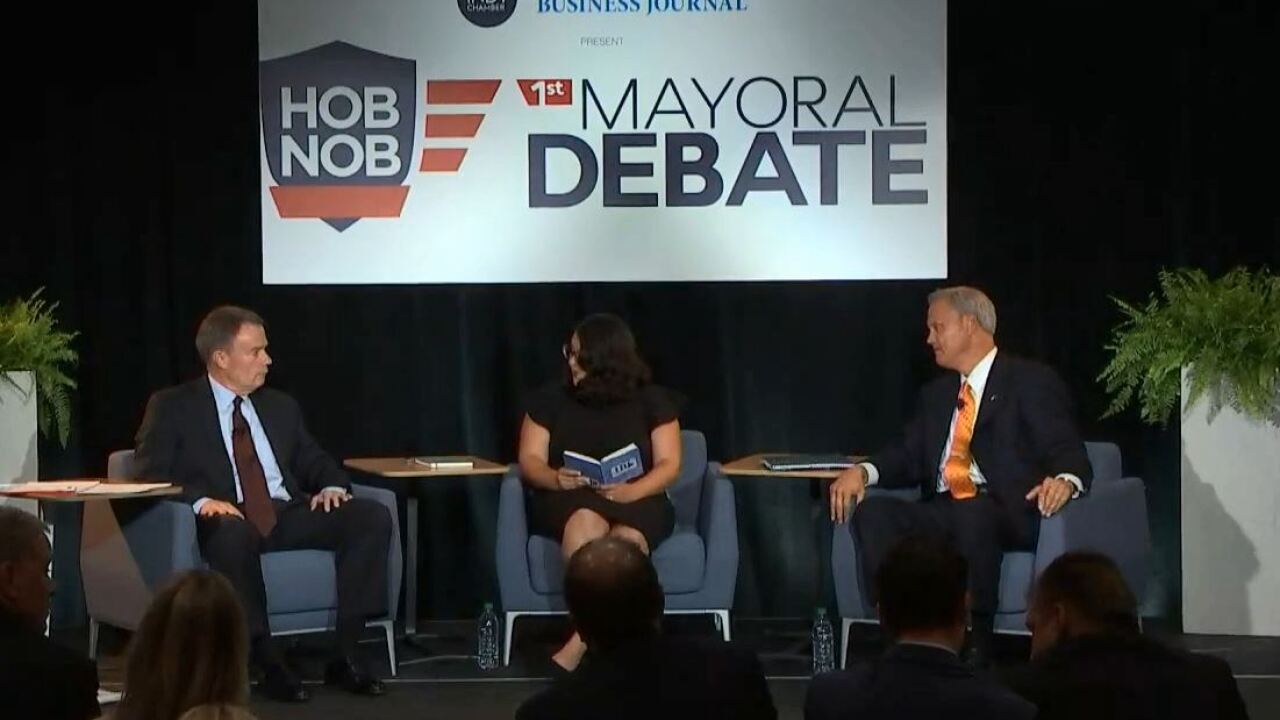 In the hour-long conversation, they covered crime, roads, transit, economic development and more.

Here are a few of the highlights:

Hogsett touted the crime prevention work that’s been done in the city and said overall violent crime was down in Indianapolis in 2018. But Merritt said the city’s efforts haven’t worked.

“You’ve had three-and-a-half years,” Merritt said. “What you’re doing is not working.”

After the debate, Hogsett told reporters the city will be getting body cameras in 2020, the first time he’s been definitive about the issue for Indianapolis.

Merritt discussed his plan to add a deputy mayor of public safety, a similar position to the one Hogsett dismantled when he took office in 2015.

Hogsett discussed his regional infrastructure plan, which has gained little to no support from the outside counties. His plan involves using money from the growth of the region (Marion and the eight surrounding counties), putting it into a pot, then distributing money from that pot to pay for road repairs.

Merritt said he hasn’t looked closely at the idea but criticized Hogsett for “going solo” on it.

“What the mayor was proposing that night and roundly rejected,” Merritt said. “With regional development authorities – if everybody’s working together – and you don’t have a lone ranger out there, a la Joe Hogsett, you can get things done.”

The Hogsett administration recently announced a baseline $18 an hour pay for companies seeking tax incentives from the city. This means if a company wants a tax break for expanding into Marion County, it can’t tout created jobs if those jobs pay less than $18 per hour.

Merritt said he hadn’t read that plan, but it gives him pause. He said $18 an hour could make it tough with Indianapolis to compete with other cities.

“We want everyone to earn as much as possible,” Merritt said after the debate. “I don’t know if our neighbors in Plainfield or in Carmel or Greenfield or Greenwood pay $12 or $16. It’s difficult to come to grips with what I actually would do. But whatever we do, in the way of tax incentives or economic development, it will be competitive with our neighbors and with our competition across the country.”