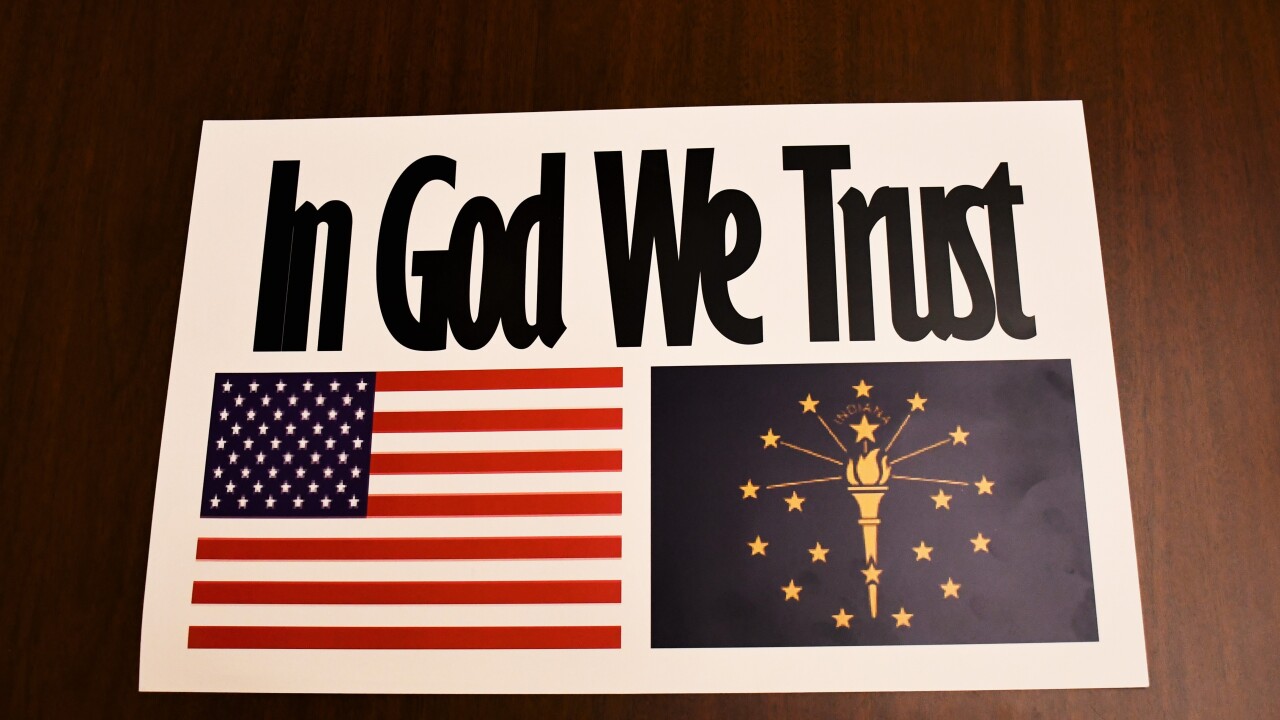 Provided
An example of the In God We Trust sign that would be displayed in every Indiana classroom and library, if Senate Bill 131 passes into law.

INDIANAPOLIS — Indiana schools won’t have to place an “In God We Trust” sign in every classroom in the state, after some changes were made to a Senate proposal Wednesday.

Sen. Dennis Kruse, R-Auburn introduced Senate Bill 131, which originally mandated each school place a poster or framed photo in every classroom and library that shows the following:

SB 131 was amended Wednesday afternoon to change the language in the bill and make it optional for the school corporations to put up the posters. It was also changed to state that if a school does put up such a poster, they must raise the funds on their own – instead of using public funds.

If the bill sounds familiar, it’s because Kruse introduced a similar bill last year. Last year’s bill also called for every school including a study of the Bible as an elective course in its curriculum. The 2019 bill was vastly different at the end of the process than the one Kruse initially introduced.

Sen. Mark Stoops, D-Bloomington, spoke against the bill in the last committee hearing, and did so again Wednesday.

"The Declaration of Independence noted that the power of the government is not from God, but from the people,” he said. “I think it's important to understand what the Founding Fathers believed when they had the clause that there must be a separation of church and state. This also protects religion from interference by government in their beliefs. I appreciate the time, and my vote is no."

The phrase “In God We Trust” has been the national motto since 1956, but it’s been on most U.S. coins since the 1860s. In 1907, President Teddy Roosevelt famously did not like the phrase being on coins.

The amended bill passed, 9-2, with Stoops and Sen. Eddie Melton, D-Gary, voting against it. It now heads to the full Senate.