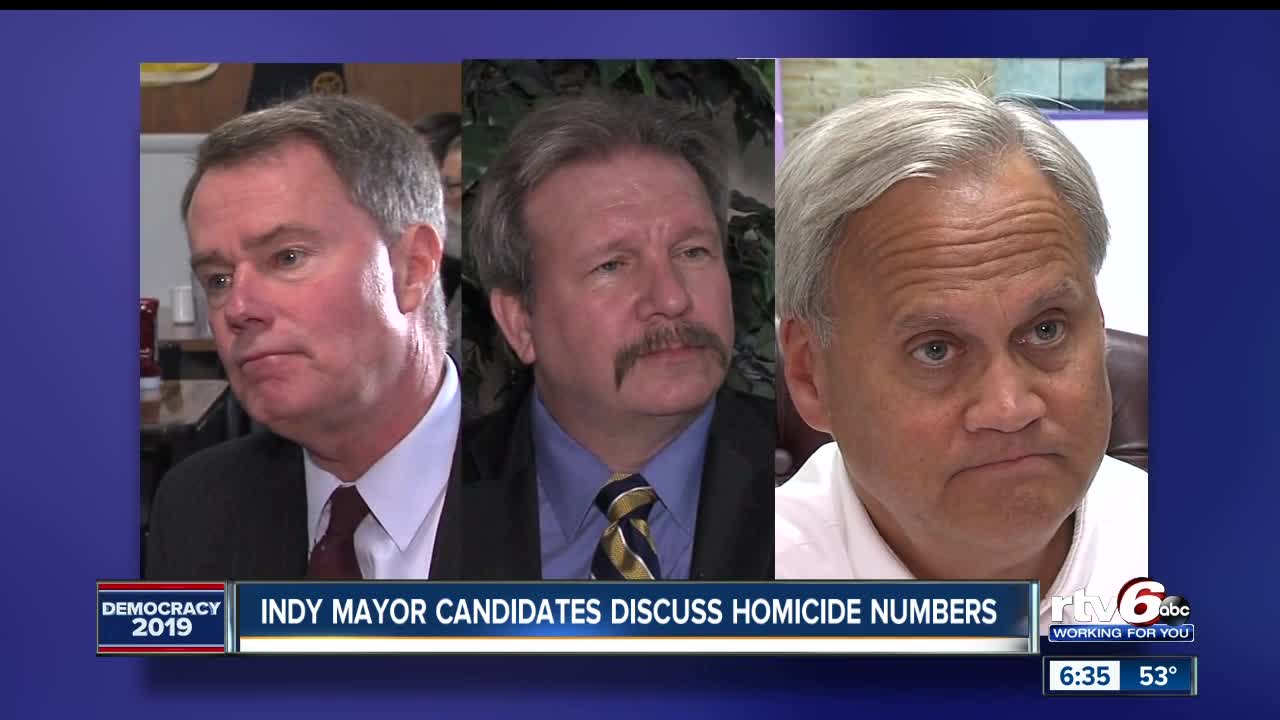 With a record number of homicides over the past few years, public safety is one of the top issues on voters' minds when they head to the polls next week.

RTV6 is profiling five top issues on voters’ minds when they go to cast a ballot for Indianapolis mayor on Nov. 5. We spoke to all three Indianapolis mayoral candidates about their plans and promises for the city over the next four years.

INDIANAPOLIS — With record-breaking homicides over the past few years, public safety is one of the top issues on voters' minds when they head to the polls next week.

Indianapolis has experienced 131 criminal homicides in 2019, RTV6 data shows. But this number is still lower than 147, which was 2018’s homicide number on Oct. 28. If the pace holds, Indianapolis will see a drop in year-to-year homicides.

The likely homicide decrease is something the current officeholder, Democratic Mayor Joe Hogsett, will tout.

"I think what we're seeing now is the ship has finally turned," Mayor Joe Hogsett, D-Indianapolis, said. "The investments that we've been making are starting to pay dividends, and I hope we see a continued reduction in crime."

Republican Sen. Jim Merritt has attacked Hogsett on crime since he first announced his run for mayor in January.

"Who knows what's going to happen?" Merritt said. "The bottom line is we need new techniques to accept the challenge of violent crime."

Libertarian candidate Douglas McNaughton said the key isn’t focusing on policing, it’s about focusing on the youth of the city.

"Get to the youth and do more youth outreach," McNaughton said. "It's been shown time and time again, through many studies throughout the country, that the money you put into youth assistance and violence prevention, the less violence you have on down the road."

Indianapolis voters will get to choose one of these three candidates on election day — Tuesday, Nov. 5.