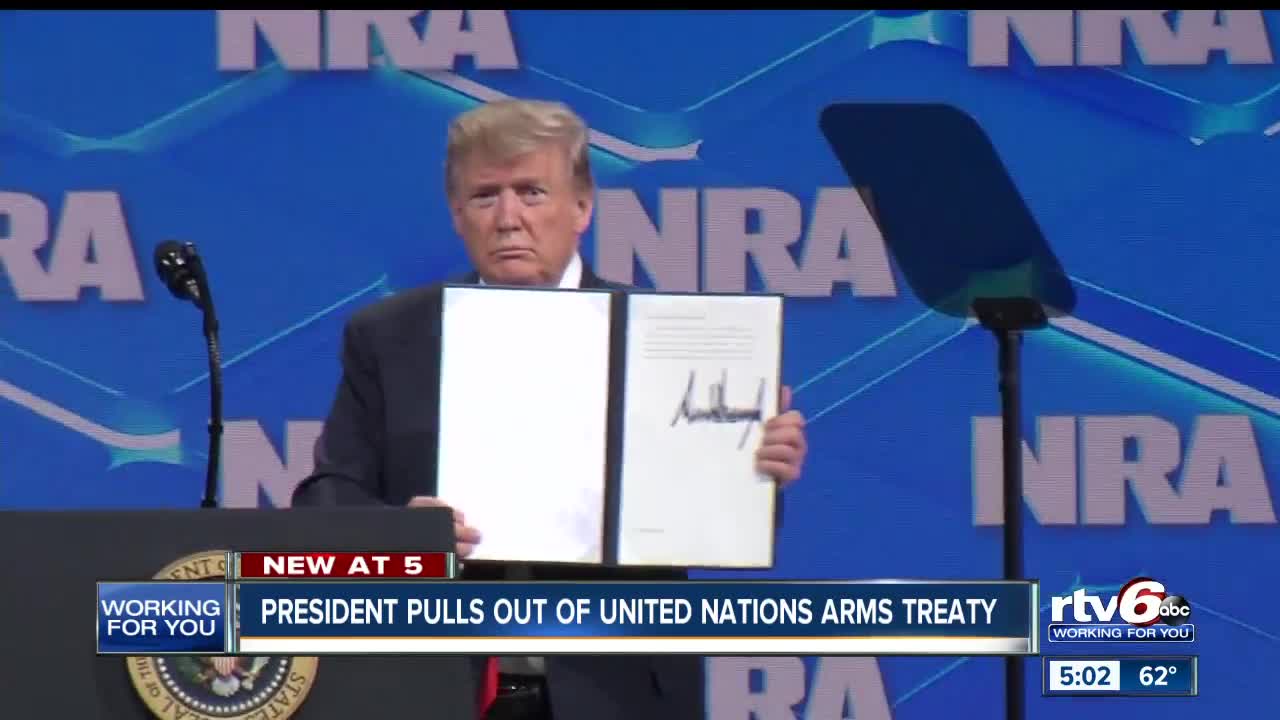 President Donald Trump gave the National Rifle Association something they have long wanted by pulling out of the United Nations Arms Treaty.

INDIANAPOLIS — President Donald Trump gave the National Rifle Association something they had long wanted on Friday when he announced that he was pulling out of the United Nations Arms Treaty.

"The United Nations will soon receive a formal notice that America is rejecting this treaty," Trump said at the NRA convention on Friday. "Under my administration, we will never surrender our American sovereignty to anyone."

Trump signed the resolution which regulates the $70 billion business in conventional arms and seeks to keep weapons out of the hands of human rights abusers. He tossed the pen he used to sign it into the audience.

It wasn't challenging to find NRA members who appreciate and ultimately support the president's decision. The NRA has said the treaty undermines domestic gun rights in the past.

"It was the smartest thing he's done today. It was a bad deal to begin with," Chris Kelly, an NRA conventioneer, said. "It doesn't do anything good for America. It just took rights away from Americans."

The president's decision at the convention has a global impact.

All 193 nations within the United Nations General Assembly overwhelmingly voted in favor of the measure in April 2013.

The United States is the number one exporter of arms in the world and the NRA has long opposed the treaty.

"We're happy that Donald Trump looks at America first. What we need - first," John Thompson, another NRA conventioneer, said. "Rather than worrying what everyone else in the world wants and needs from a global perspective."

Thus far, 101 countries have formally joined the treaty, another 29, including the U.S., have signed it, but have yet to join officially. Trump's move on Friday is a setback for the treaty. However, the positive reaction at the convention was pervasive.

"The treaty violates the US Constitution and the second amendment - that's the issue," Carl Giuliano, an NRA conventioneer, said. "It is a breach of our own laws."

The United States Senate had never ratified the treaty, although. In a statement, a spokesman for Amnesty International USA said:

"With this announcement, the Trump Administration will re-open the floodgates for arms sales with weakened human right criteria."