Rep. Susan Brooks to retire from Congress, not running for reelection 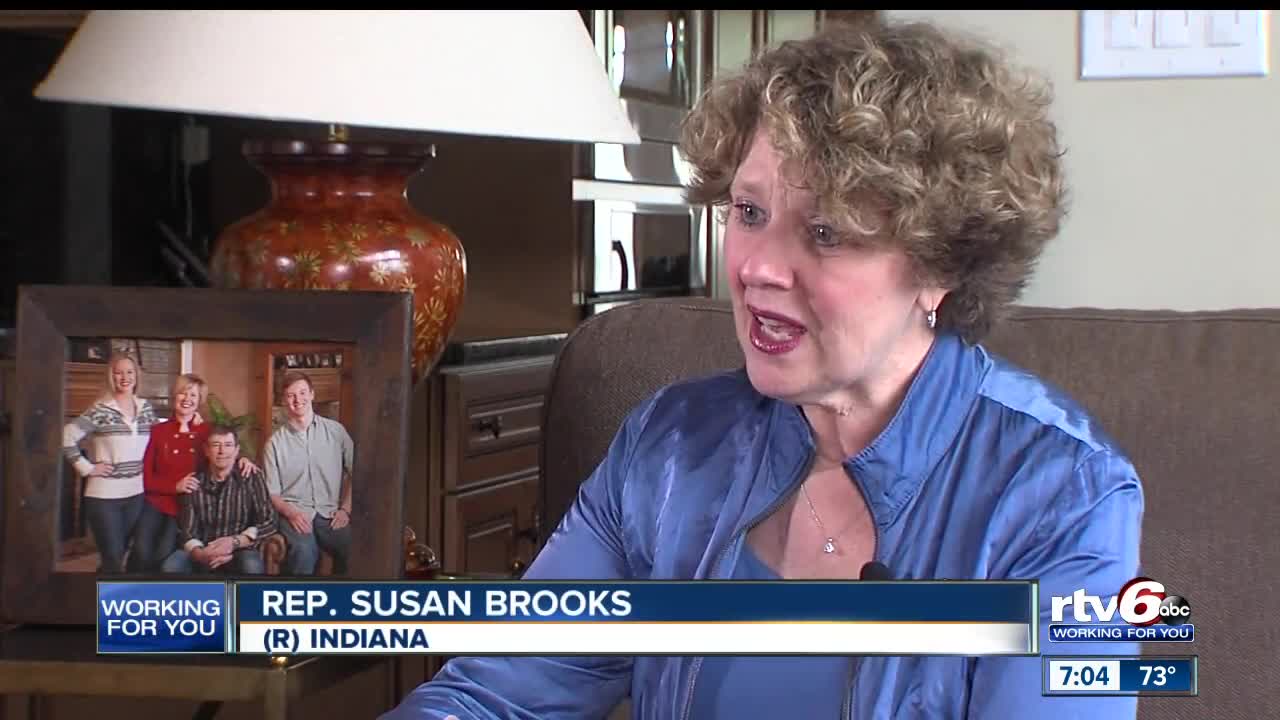 Indiana Rep. Susan Brooks will step down after her current term. 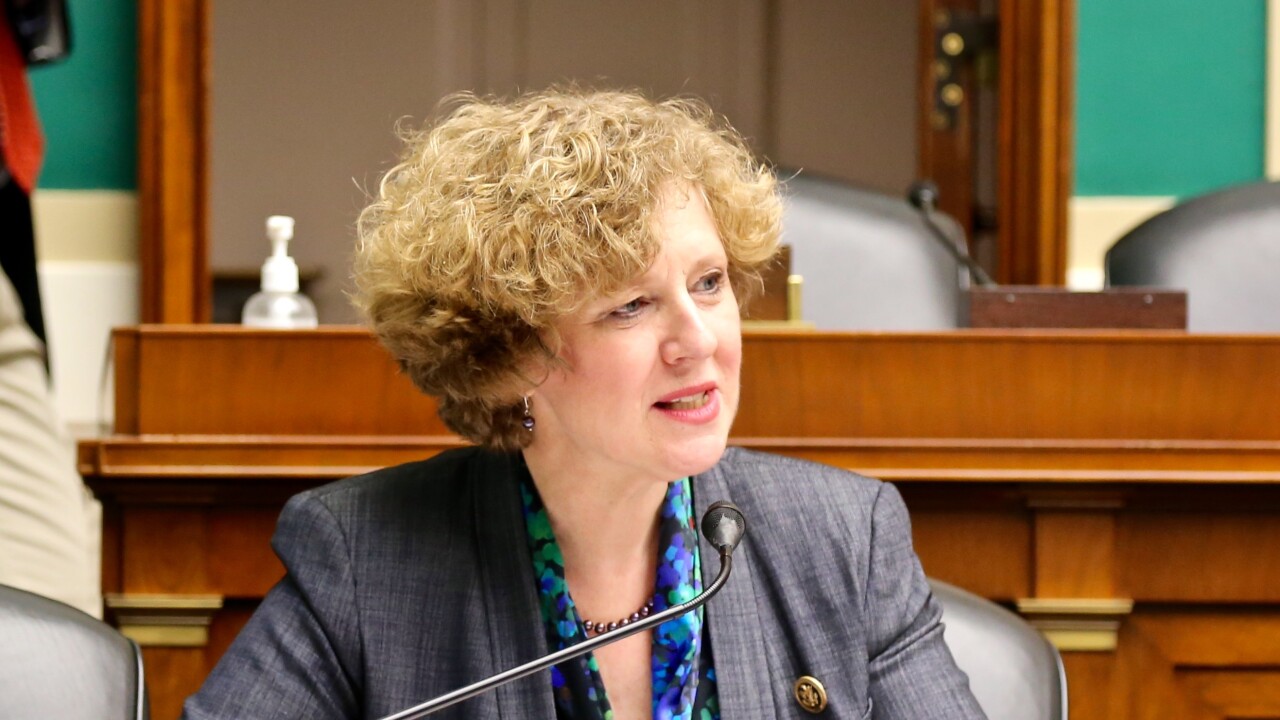 INDIANAPOLIS — Susan Brooks, R-Carmel, announced Friday that she would be retiring from Congress at the end of her term in 2020.

In a letter to her constituents, Brooks, 58, said she is ready to "slow down" and spend more time with her family. She also said she is a believer in term limits.

Brooks represents Indiana's 5th Congressional District, which covers Hamilton, Madison, Grant and Tipton counties, as well as part of Blackford, Marion, Boone and Howard counties. She has served in Congress since 2012. She was the first woman from Indiana to chair a House committee - the House Ethics Committee.

Brooks first won her seat in 2012, when she beat Democrat Scott Reske by 20 points.

Last month, she was one of eight House Republicans to go against their party and vote in favor of H.R. 5, also known as the Equality Act.

“Discrimination of any kind, towards anyone, is wrong and at this time in our nation’s history, we cannot turn a blind eye to the discrimination the LGBTQ community faces,” she said last month.

Brooks and Rep. Jackie Walorski, R-Elkhart, are the first Republican women to serve the state of Indiana in Congress since 1959.

More than a year away from the 2020 election, the Indiana Democratic Party has already said they will fight for the 5th District.

“Congresswoman Brooks’ decision to step aside reaffirms just how quickly the political landscape is shifting toward Hoosier Democrats in places like the Indianapolis suburbs," Indiana Democratic Party chairman John Zody said. "Senator Joe Donnelly won CD5 in 2018 and legislative candidates made seismic gains there last fall. There’s absolutely no doubt it’s a top target for Hoosier Democrats in 2020. Game on.”

You can read the full statement from Susan Brooks below.

Eight years ago this month, on the night of our 25th wedding anniversary, David and I arrived at the decision to launch my run for Congress. On the picture perfect June Sunday that followed, we convened a meeting of our team and set the foundation for the campaign to follow. With a lot of hard work – and the dedication and support of our great family and countless friends – we surprised a lot of people and celebrated an historic primary election victory on May 8, 2012.

Today, we begin writing the end of that story with my announcement that I will retire as U. S. Representative for the 5th District of Indiana at the end of my current term.

After spending 16 of the last 22 years in some form of public service, I am ready to slow down and begin a new chapter where I am home and spending more time with David, my family, and our many friends. Our terrific children, Jessica and Conner, are literally spread across the continent, and I want the kind of schedule where he and I can visit them in their new homes. Like many of you, we are aging into a period of our lives where we need greater flexibility to see our parents when their care grows in time and significance.

I am also a strong believer in term limits. In Indiana, we are blessed with countless gifted, intelligent, and committed Republican leaders – it’s a really deep (younger!) bench – and it is time for the fresh ideas and new energy that one of them will bring to representing the 5th District.

As I reflect on how grateful I am for this opportunity to serve, I am most proud of my record and the good work we’ve done together. My eighth bill has passed and is awaiting the President’s signature. I didn’t run for Congress to stand on the sidelines. I committed to being a tireless advocate for Indiana and the people of the 5th District. Even as I contemplate the end of my term next year, I am so proud of what we have achieved and will continue to do for the next 18 months.

In addition to those eight bills, I held my colleagues accountable as Chairwoman of the House Ethics Committee, the first woman from Indiana to chair a House Committee. My service on the United States House Select Committee on Benghazi was an opportunity to serve not only my constituents, but ultimately, every American. And this year I have worked as a member of the once in a generation Select Committee on the Modernization of Congress, and we will provide our colleagues with a series of reforms and recommendations to improve this body for years to come.

As Chairwoman of the House Ethics Committee, I worked to craft and pass the first overhaul of Congress’s response to sexual harassment in the workplace in nearly 25 years. No longer will taxpayers be on the hook to pay settlements for Members of Congress who commit harassment. There is no place for such conduct, and my Committee actively and aggressively investigated allegations of misconduct. I’m proud of the work I did to protect victims of harassment in Congress and hold accountable those who abuse their authority.

Serving you also opened doors to lead on critical issues facing the nation and Hoosiers: strengthening our national security, restoring confidence in Congress, fighting the opioid epidemic that has ravaged our communities, protecting victims of abuse and making meaningful change in the everyday lives of Hoosiers.

The reauthorization of Pandemic and All-Hazards Preparedness and Advancing Innovation Act, which I authored and is awaiting the President’s signature, is critically important legislation that makes our nation safer and better prepared for natural disasters or biological, chemical, radiological or nuclear threats to our public health. This bill will ensure our health care professionals are trained to respond to possible pandemic outbreaks; prioritize the further development of our national stockpile of vaccines, medical equipment and diagnostics; and establish new advisory groups focused on protecting vulnerable populations such as senior citizens and people with disabilities during public health threats and emergencies.

Throughout my career, I have fought against substance abuse and to ensure those struggling with addiction have access to the treatment they need. It started with representing those suffering from addiction as a private attorney and continued as Deputy Mayor in Indianapolis in the 90s when we worked to combat the myriad problems related to crack cocaine. As US Attorney, we fought hard against meth and began the fight against prescription drug abuse. And throughout my service in Congress, the opioid epidemic has raged, demanding our attention and action. It’s unlike anything our nation has seen. The destructive power of opioids was not recognized until far too late, and too many of our loved ones have been lost due to addiction and abuse. In Congress, I worked on the Comprehensive Addiction and Recovery Act, the first major overhaul of addiction legislation in 40 years. Specifically, I included a provision that required a federal taskforce to release opioid prescribing guidance to our medical community so we can stop the overprescribing of these drugs while ensuring those with chronic pain have the relief they need.

One of the untold but best aspects of serving you in Congress has been the opportunity to support the men and women who serve us all each day as first responders. It was a very simple strategy – to protect those who protect the community. As I learned about the mental health struggles our law enforcement officers faced from their grueling jobs, I knew we had to take action. I introduced a bill, The Law Enforcement Mental Health and Wellness Act, which makes grants available to initiate mental health peer mentoring pilot programs, develops training for mental health providers specific to law enforcement mental health needs, and supports law enforcement officers by studying the effectiveness of crisis hotlines and annual mental health checks. It was one of the best days of my tenure when President Trump signed this bill into law. I have and will always stand with our nation’s first responders.

Among the most urgent matters I faced during the last three years was the surfacing of unimaginable crimes endured by amateur athletes who were preyed upon by those they trusted. I joined my colleagues in Congress to pass the Protecting Young Athletes from Sexual Abuse Act – the first step in providing those who participate in amateur sports a system that better protects our athletes and guards against this kind of abuse from ever happening again.

And, nearest to my heart, is the work I’ve been able to accomplish on behalf of our great state and my constituents. I was pleased to work to add Martin Luther King Park in Indianapolis to the National Civil Rights Network. I’m also proud to have renamed the Veterans House of the Roudebush VA Hospital for former Indiana Governor, Health and Human Services Secretary and Army veteran, Dr. Otis Bowen. I supported grants specific to Indiana totaling $114 million that enhance the lives of Hoosiers every day.

Lastly, the one-on-one assistance my office provides to constituents was second-to-none. To date we’ve handled over 4,000 cases, helping constituents do everything from completing foreign adoptions to obtaining long overdue medals for members of our armed forces to helping Hoosiers recover thousands of dollars due to them from federal agencies to assisting our veterans receive the benefits which they earned and are owed. This difficult work would not be possible without the tenacity and experience of my team from day one.

The next eighteen months will provide even more opportunities to help my constituents and all Hoosiers. So hopefully, this list will grow!

Today and the days that follow will be bittersweet. I hope to speak to as many of you as possible personally. But in case I don’t, I want to leave you with a couple final thoughts.

There will be much, MUCH, conjecture about my decision. I’ve made a lot of career changes, but none with the kind of public scrutiny this will attract. What you learn after you win that first campaign is that public service is the most personal career decision you’ll ever make. You’re never off the clock. The pressure to be everywhere and speak to every issue and event is immense – it is a part of the job that is difficult to turn off. So I salute those who spend decades running, winning, and serving. However, that was never my vision back in June of 2011, and despite the deep gratification I feel for what we have achieved, I am sticking to the plan.

With time still left on the clock, I look forward to finishing strong. It is critical to me that this historically safe Republican seat remains securely in the GOP column. Based on the four general elections that I won handily, and some very recent and very solid survey numbers, I am confident our nominee will have the same comfortable margins I have had. Rest assured I will commit myself to working hard for her or him to guarantee another Republican victory in the 5th District.

Thank you again for riding alongside David and me during this journey. It has been a tremendous honor to serve you and my fellow Hoosiers in Congress.