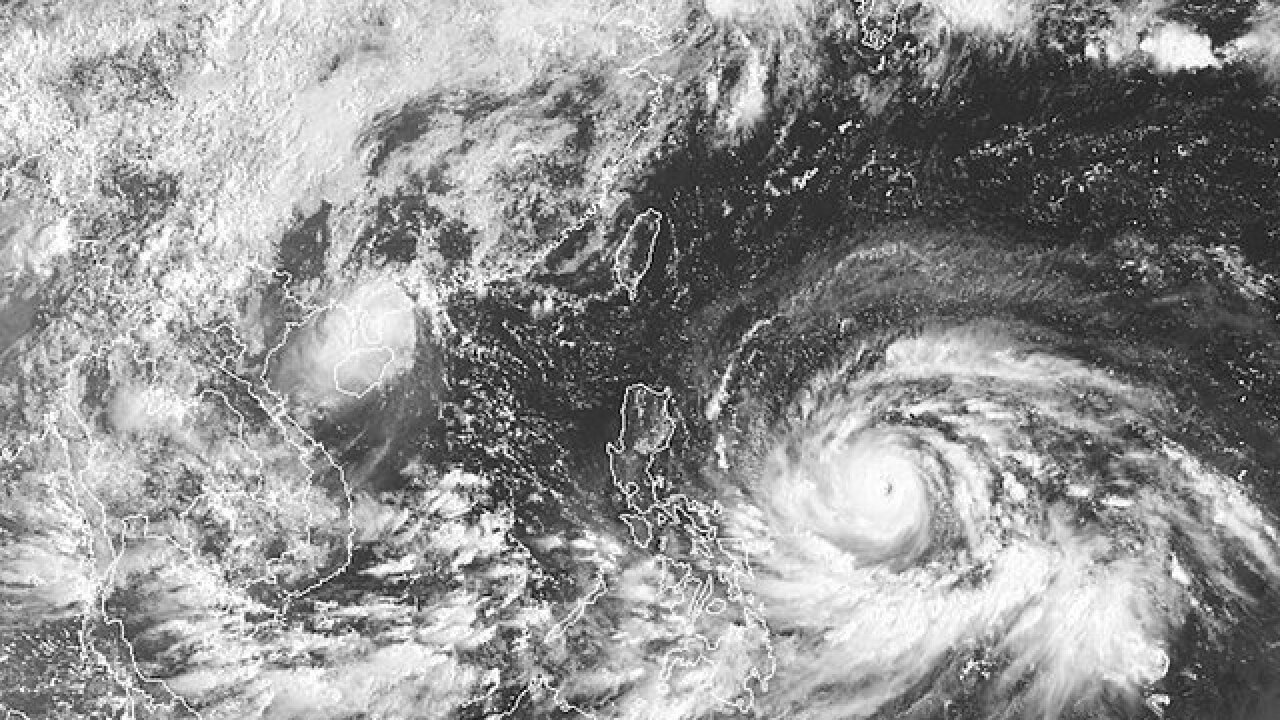 Super Typhoon Mangkhut made landfall in the northern Philippines early Saturday, bringing with it gale-force winds and heavy rains as aid agencies warn millions are at risk.

Known locally as Ompong, Mangkhut is lashing the northern parts of Luzon Island as it heads west into the South China Sea and toward Hong Kong and southern China.

Mangkhut made landfall in far northeast Luzon in Cagayan Province about 2:30 am local time on Saturday. It has maximum sustained winds of 270 kph (165 mph) with gusts as high as 325 kph (200 mph), which is the equivalent of a Category 5 hurricane.

"All things being equal, Mangkhut is a bigger, stronger and more dangerous storm" than Hurricane Florence, which is battering the Carolinas, said CNN Meteorologist Brandon Miller. "Any land hit directly would see more significant and destructive impacts from the Super Typhoon due to its size and intensity."

However, he added that the extent of the destruction caused by a hurricane or typhoon depends on what it hits, and the US East Coast is "much more populated with significantly more infrastructure to damage."

An estimated 5.2 million people are within 125 km (77 miles) of the projected path of the Super Typhoon, according to the National Disaster Risk Reduction and Management Council.

On Friday, multiple parts of Luzon were placed under Tropical Cyclone Warning Signal No. 4, by the Philippine Atmospheric, Geophysical and Astronomical Services Administration (PAGASA), meaning those areas could expect winds of up to 185 kilometers per hour (114 mph) that could uproot trees, destroy crops, take out electricity and damage buildings.

PAGASA has warned of storm surges up to 19 feet along the Cagayan and Isabela province coastlines.

Most of the rest of the island is under Signal No. 3, meaning it can expect winds of up to 100 kph (62 mph) and significant risk to trees, crops and structures. Parts of the island are also at risk of flooding due to the heavy rains Mangkhut is bringing with it.

Mangkhut is currently on track to be as strong as Super Typhoon Haiyan, which left more than 6,000 people dead in the Philippines in 2013, though that storm hit a more populated part of the country.

Northern Luzon was also devastated in 2016 by Super Typhoon Haima -- known as Lawin locally -- with 14,000 houses destroyed and 50,000 homes damaged, according to CNN Philippines.

"We are bracing for the worst here," said Lanelyn Carrillo, a spokeswoman for World Vision, a humanitarian organization. "There is a sense of fear that we might be facing a storm as bad as Haiyan or Haima."

As of Friday morning 2,298 families, equivalent to more than 9,000 people had been preemptively evacuated from their homes in Ilocos, Cagayan Valley and Cordillera Administrative Regions in northern Luzon.

Governor Bodjie Dy reports more than 5,000 people have been evacuated from coastal areas in of Isabela province.

The Philippines Red Cross said it had activated 30,000 volunteers across Luzon to prepare for the impact of the storm and dispatched a "humanitarian caravan" consisting of rescue and relief vehicles to the parts of the island expected to be among the worst affected.

"We're worried for the 10 million people in the Philippines living in the path of this destructive storm, including those who have been displaced several times due to the monsoon rains last July and August," Richard Gordon, chairman of the Philippines Red Cross, said in a statement. "We are preparing our emergency assets and relief items. Our staff and volunteers are on high alert for possible deployment."

As well as the human cost, officials told CNN Philippines the cost to rice and corn crops could be upward of $116 million, with more than 1,220,000 hectares of fields expected to be damaged by the storm.

At least 134 flights have been canceled across the country and the Philippines Coast Guard has posted more than 4,000 people have been stranded due to ferry disruptions in the archipelago.

Once it passes over the Philippines, Mangkhut will continue west through the Luzon Strait into the South China Sea, making landfall in southern China early Sunday.

While the storm will likely be weakened after making landfall in Luzon, the Hong Kong Observatory said it is still expected to be at Super Typhoon level as it nears that city and Macau, bringing with it winds of up to 195 kph (120 mph), equivalent to a Category 3 hurricane.

Per current projections, Mangkhut could be one of the strongest storms to have an impact on Hong Kong in over six decades.

Officials in Hong Kong held emergency meetings Friday, and residents living in low-lying areas and outlying islands have been urged to move to temporary shelters, 48 of which will be opened across the city to cater to the homeless and displaced people.

Macau's Meteorological and Geophysical Bureau warned that Manghkut would "pose a serious threat to the Pearl River Delta," in which the city is located.

Last year, 10 people died in Macau as a result of Typhoon Hato, the strongest storm to hit the city in over five decades, which also caused widespread flooding and damage to property.