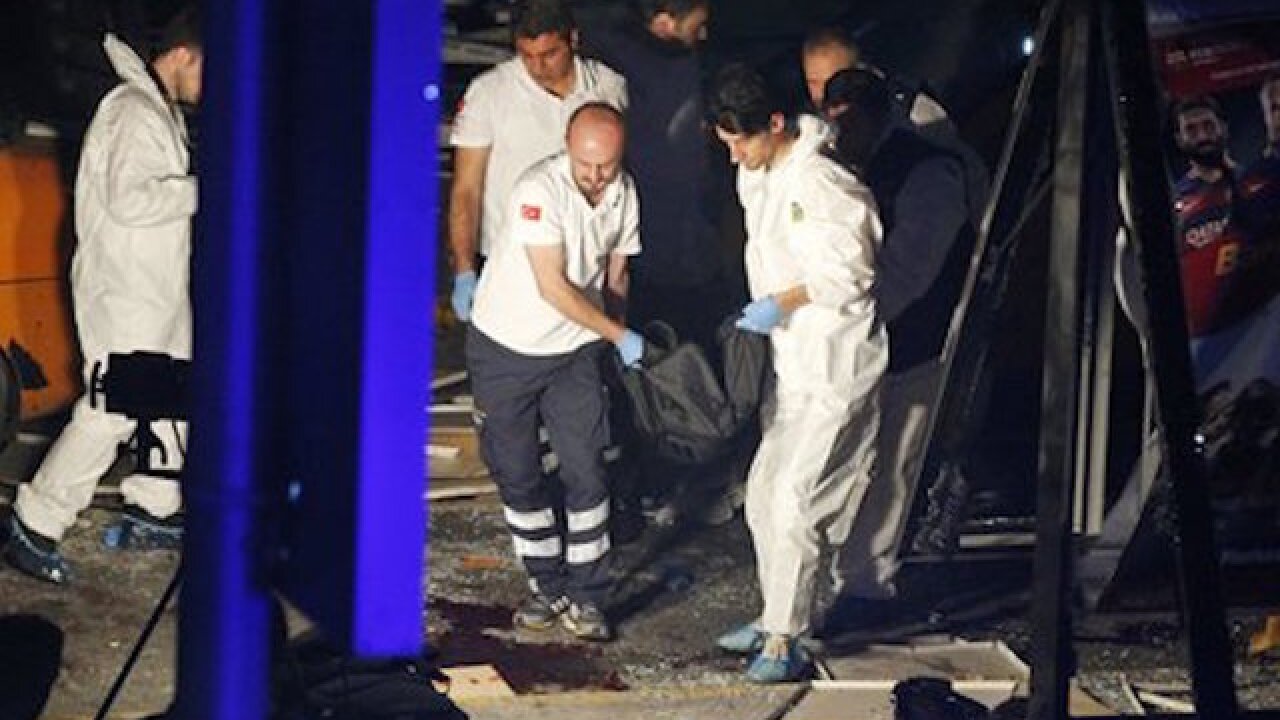 ISTANBUL (AP) — The three suicide bombers who attacked Istanbul airport were a Russian, an Uzbek and a Kyrgyz, a senior Turkish official said Thursday, hours after police carried out sweeping raids across the city looking for Islamic State suspects. Tuesday's gunfire and suicide bombing attack at Ataturk Airport killed 43 people and wounded more than 230 others.

The day opened with police conducting raids on 16 locations in Istanbul, rounding up 13 people suspected of having links to the Islamic State group, the most likely perpetrator of the attack at one of the world's busiest airports. The manhunt spanned three neighborhoods on the city's Asian and European sides.

The official, who spoke on condition of anonymity in line with government regulations, did not name the attackers.

"A medical team is working around the clock to conclude the identification process," the official told journalists, noting that extensive soft-tissue damage had complicated efforts to identify the attackers. The official could not confirm Turkish media reports that the Russian national was from the restive Daghestan region.

From the start, Turkish authorities have said all information suggests the attack was the work of IS, which this week boasted to have cells in Turkey, among other countries.

There was no immediate claim of responsibility by the militant group, which used Turkey as a crossing point to establish itself in neighboring Syria and Iraq. The group has repeatedly threatened Turkey in its propaganda publications.

Interior Minister Efkan Ala said 43 people were killed in the attack, including 19 foreign nationals. Of those who were wounded, 94 remained in hospital, the Istanbul Governor's office reported.

Unconfirmed details of the attack continued to emerge on Turkish media.

The private Dogan news agency said the Russian attacker had entered the country one month ago and left his passport in a house the men had rented in the neighborhood of Fatih.

The Karsi newspaper, quoting police sources, said the trio was part of a seven-person cell who entered Turkey on May 25. The assailants raised the suspicion of airport security on the day of the attack because they showed up in winter jackets on a summer day, several media reported.

The Dogan news agency broadcast footage of the Istanbul police raids. It showed a special forces police team entering a building carrying what appeared to be a steel shield to protect from possible counterattack during the raid.

In separate large-scale police operations, nine suspects believed to be linked to the IS group were also detained in the coastal city of Izmir. It was not clear if the suspects had any links to the carnage at the airport.

The Izmir raids unfolded simultaneously in the neighborhoods of Konak, Bucak, Karabaglar and Bornova, according to Anadolu Agency. Police seized three hunting rifles and documents relating to IS.

The report said the suspects were in contact with IS militants in Syria and were engaged in "activities that were in line with the organization's aims and interests," including providing financial sources, recruits and logistical support.

Days before the Istanbul attack, on June 25, security forces killed two suspected Islamic State militants who were trying to cross the border illegally and ignored orders from security forces to stop, according to local media reports.

One of the two militants was wanted by Turkey on suspicion that he would carry out suicide attacks in the capital Ankara or in the southern city of Adana, Anadolu said.

Turkey shares long, porous borders with both Syria and Iraq, where IS controls large pockets of territory. The government has blamed IS for several major bombings over the past year, including in the capital Ankara, and on tourists in Istanbul.