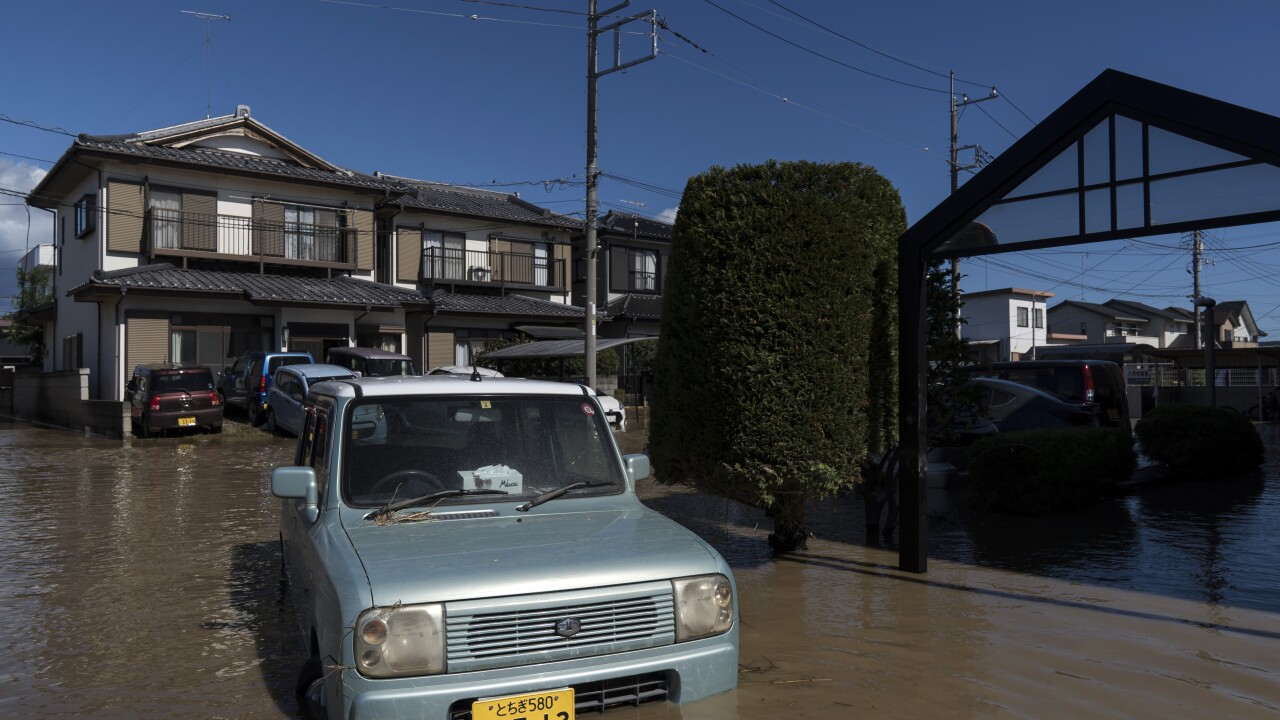 Tomohiro Ohsumi/Getty Images
SANO, JAPAN - OCTOBER 13: Houses and vehicles sit partially submerged in floodwater following the passage of Typhoon Hagibis on October 13, 2019 in Sano, Tochigi Japan. At least five people are reported dead and many others are missing after Typhoon Hagibis, one of the most powerful storms in decades, swept across the country. (Photo by Tomohiro Ohsumi/Getty Images)

(CNN) -- Typhoon Hagibis weakened to a tropical depression as it continued to move across central Japan on Sunday, leaving at least 15 people dead and more than 140 injured in its wake.

The storm made landfall just before 7 p.m. Saturday local time on the Izu Peninsula, southwest of Tokyo, bringing hurricane-force winds and heavy rains which led to widespread flooding. More than 230,000 people were evacuated ahead of the storm, with emergency orders issued for many cities around the greater Tokyo area.

Along with the 15 deaths, Japan's Fire Disaster and Management Agency said about 140 people had been injured and nine remain missing.

Prime Minister Shinzo Abe offered his "condolences for the people killed in the disaster and my sincere sympathy for the people affected by this disaster."

"Now not only police, fire department and coast guard, but also 27,000 staff of the self-defense force are on rescue, search for missing and supporting evacuation," Abe said Sunday. "We are to enhance the scale of operation depending on necessity."

Typhoon Hagibis came as the country hosts the Rugby World Cup. Two matches -- England-France and New Zealand-Italy -- had to be preemptively canceled. Sunday's Pool B match between Namibia and Canada in Kamaishi was also canceled hours before it was due to take place.

However a pivotal Pool A match between Japan and Scotland at 7:45 p.m. local time will go ahead, World Cup organizers said Sunday. Formula One events scheduled for Sunday also went ahead as planned.

While authorities made it clear that the decision to cancel games was necessary to ensure the safety of players and fans, many were critical of the tournament's inability to reschedule games and apparent unpreparedness for the extreme weather -- despite the World Cup being held during typhoon season.

In canceled games, two points are awarded to each team in line with tournament rules. This impact who qualifies for the next round of the competition.

Evacuation advisories had been issued throughout much of the Tokyo region as the typhoon approached Japan's main Honshu island, affecting tens of millions of people. The Japanese capital was locked down on Saturday, with usually busy streets abandoned amid torrential rain.

There were widespread transport disruptions Saturday, with flights, bullet trains and other transport canceled across Honshu.

High-speed and regular trains headed south of Tokyo were largely back in service Sunday, with trains to the north due to resume service in the early evening.

However as many as 212,500 households in storm-affected areas remained without power on Sunday afternoon, power companies said.