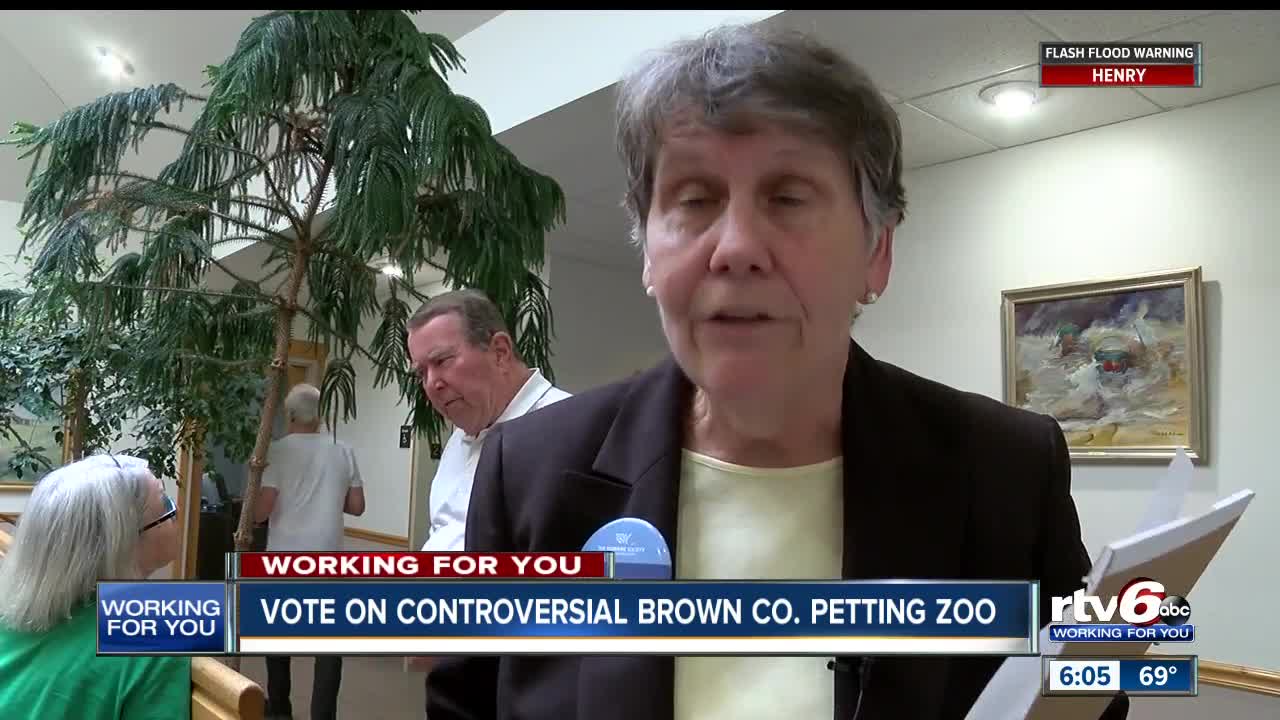 The Brown County Board of Commissioners voted 2-1 Wednesday to approve rezoning land for an exotic petting zoo.

BROWN COUNTY — Commissioners in Brown County made their decision Wednesday on a controversial petting zoo coming to their community.

Opponents argued it's not safe for visitors or the animals, especially after a child was injured there a few months ago by a wolf.

All three commissioners said they have received more letters and emails on this particular issue than any before. You could tell after nearly two hours of testimony from the public before the commissioners finally made a decision.

One-by-one, people took to the podium to share their thoughts on the petting zoo moving from Bartholomew County to Brown County. It's garnered lots of attention, as Brown County's current ordinance doesn't address petting zoos.

Kathleen Bowen's Zoo'Opolis is home to more than 100 exotic animals ranging from zebras to donkeys, chinchillas, reptiles and raccoons.

The opposition wanted to ensure animals are taken care of properly and visitors won't be in danger of getting hurt or catching any disease.

"It's a for-profit business at the expense of animals, and that is concerning to me as a citizen," Cathi Eagan, founder of the Canine Express Transport Project, said.

But in a 2-1 vote, the commissioners approved rezoning the land so Bowen can keep her business.

As an animal lover with intentions to educate the public about these exotic animals, Bowen said the petting zoo benefits society, kids and parents.

Dave Anderson, the only commissioner to vote no, said his concern about about accessibility.

"The traffic in and out of the place of business was a primary reason for me voting the way I did," Anderson said.

The zoo is located off State Road 46 and TC Steele Road with three other businesses located at that intersection nearby. And while it was approved today, that also came along with a recommendation that the animal control board examine changing the ordinance to more clearly address petting zoos.

"I am disappointed that the commissioners didn't table the issue for 30 days to allow the animal control commission to develop ordinances for a petting zoo," Eagan said.

But Bowen is excited for people to see what the petting zoo is about.

"People have a vision as to what I'm doing and then they hear other people and they get on the bandwagon instead of saying, 'Wait a minute here, folks. I'm gonna go check them out first,'" Bowen said.