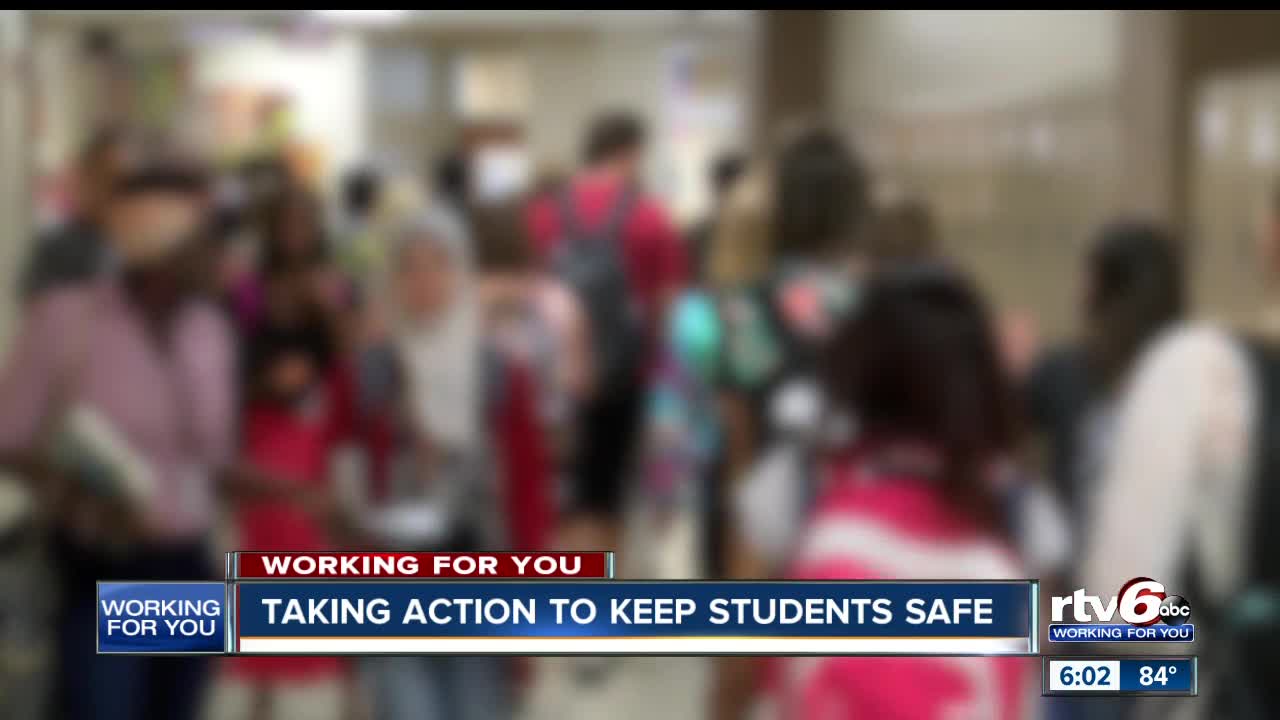 INDIANAPOLIS — Central Indiana kids have only been in class a few weeks and just this month alone, there have been five different incidents of guns found in student backpacks.

Everyday at Ben Davis High School there are four school resource officers on campus, and two extra officers during arrival and during dismissal.

A Ben Davis spokesperson says the officers' presence on the campus is key in dealing with incidents like Tuesday.

"It all comes down to how are the kids getting the guns? How are they getting them into the school?" Jordan Whitt, a Wayne Township father, said.

Whitt lives directly across from Ben Davis, where he sees the safety measures on campus.

"You can't even get in the school parking lot without checking in with the school resource officer. I think that's a good step," Whitt said. "I don't think we need to have these drastic metal detectors in schools where kids feel like they are on lockdown; I don't think that's conducive to learning. I think the responsibility starts before the kids come up to school in the morning."

"I think the new direction we are starting to move on is recognizing the mental health and social and behavioral support the students need," Adam Baker, Press Secretary of the Indiana Department of Education, said. "So they stop and don't even think to bring a gun in the first place right."

Every school district in Indiana is required to have a school safety specialist. As the country sees a rise in school shootings, Baker says how to act in active shooter situations is at the forefront of that training.

State lawmakers are also weighing in on the issue.

"Unless we want to turn our schools into prisons where every backpack, purse is checked — We are not going to do that," Rep. Jim Lucas, R-Seymour, said. "I had legislation last year that provided a standardized training program for teachers to go get firearms training and carry a firearm on school property."

Sen. J.D. Ford, D-Indianapolis, says as a member of the Democratic Caucus, he has put forward reform measures, but they don't often get a hearing in our state.

"One of the measures that could have happened the last legislature is safe storage for weapons," Senator Ford said. "That is an issue responsible owners want to ensure. Another way we can curb it is a waiting period for people purchasing weapons. This past legislature we did strengthen our red flag laws."

The department of education says state legislatures have passed a bill that increased safety funding by $5 million each year for the next two years.

A significant focus will be aimed at recognizing the mental health support students need.

In May, Wayne Township voters approved a school referendum that will address school safety. The district says the money will be used to help first responders be more aware of building layouts and safety plans. It will also include upgrades to school security systems.

In reference to the gun found in a student's backpack at Arsenal Tech on August 8, an Indianapolis Public Schools spokesperson tells RTV6 they received a tip about the gun through a video posted on social media. In the video, the student is seen showing off the gun in his backpack.

"The Tech administrators engaged IPS Police. They intercepted the student as soon as he arrived on campus, searched his backpack and found the gun," Carrie Black, IPS Communication Manager, said. "We have been successful with proactive steps to address safety and security while also striving to find even better ways to work with students, staff and parents in addressing the well-being of all while on our campuses."

Lawrence Central released the following update to RTV6 following an incident on August 15 when a student attempted to bring a gun into the school:

"In 2018, the district invested in 16 walk-through metal detectors for secondary buildings and central office. Random checks are done daily and have actually been in place for extracurricular events since 2015. These efforts are in addition to the metal detection wands received from the state in 2018 which are used daily in buildings for late arrivals and extracurricular events. All checks comply with Board Policy 5771 and Indiana Code 20-33-8-14. Armed police officers and SROs are present daily in all secondary buildings. Elementary buildings have floating security. The district has invested heavily in security at all levels of the organization. This investment includes the building renovation plans across the district, centered around safe and secure 21st century learning spaces for students."

Washington Township Schools also released an update to RTV6 following an incident involving a student who brought a gun to North Central High School on Tuesday.

"Washington Township Schools has an increased security presence at North Central High School today to ensure the safety and security of our students and staff.

A review of the situation on Wednesday indicated that the school safety team in collaboration with school administrators, worked quickly to identify a student who was out of place.

We are proud of our safety staff and administrative team for acting swiftly and efficiently, following existing safety protocols that were developed by a multi-disciplinary team made up of our district safety committee and with our first responder partners which include IMPD, IFD, and the Department of Homeland Security. Washington Township has 12 administrators and school police officers that are trained and have met all statutory requirements for certification as School Safety Specialists in the state of Indiana.

The district has used metal detectors, both stationery and handheld, as appropriate and will continue to assess and explore the need for future use in our schools. Handheld metal detectors are also available to assist building administrators across the school district to enhance safety in matters involving possible weapons and other safety concerns.

We are always evaluating best practices for school safety and security and the safety of our students consistently remains a top priority."