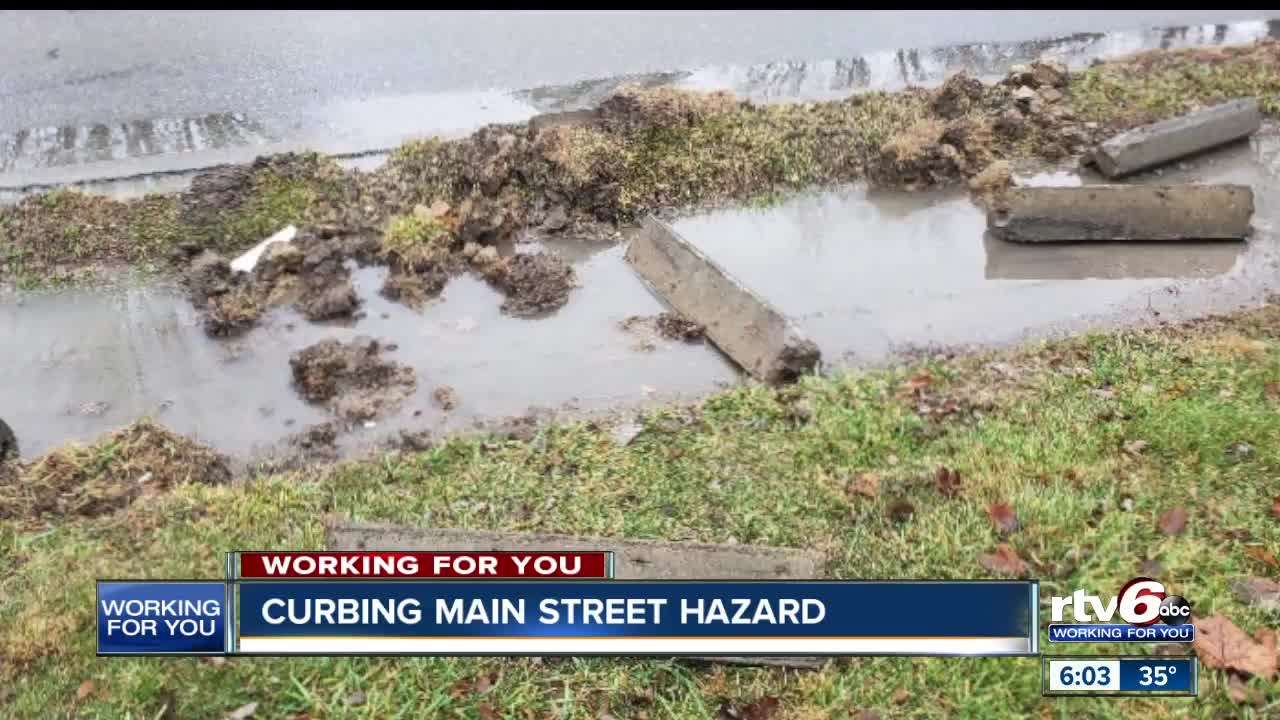 Homeowners and businesses along S.R. 38 in Madison County have grown tired of curbs that on occasion end up flying into their yards.

MARKLEVILLE — State Road 38 is the main thoroughfare through the town of Markleville in Madison County, and every time it snows, the same problem pops up.

"We don't want any property damage, anybody injured by this. We'd like to see the problem resolved down the road," said Todd Leever, Markleville Streets Superintendent.

The curbs along Main Street are pinned to the pavement known as "pin curbs." They get damaged or fly away, landing in someone's yard after being hit by a state snowplow.

"The guys come through; they can't see the curbing. When the blade makes contact — it automatically tore out of the road," said Leever.

Todd and Town Council President Daniel Roseberry gave us a walking tour pointing out the damage from this past December.

With the town focused on making big infrastructure improvements, they're tired of seeing this happen and would like a resolution.

Roseberry stops by the sight of where pin curbs have been removed after being hit.

"This is from the last snowstorm, this just happened here--a couple of weeks ago — you see, can soil gets all tore up, this a site where someone has cleaned it up," explained Roseberry.

Leever chimed in pointing to other concerns with pin curbs that have been damaged and not replaced.

"You can see out sidewalk starting to sink over here from the erosion from the curb being gone," added Leever.

It was about 20 years ago that the pinned curbs were installed along State Road 38.

What might have been an innovation or a money saver then has turned out to be a nuisance on Main Street.

Since Main Street is a state road, RTV-6 reached to the Indiana Department of Transportation for review and response.

Spokeswoman Mallory Duncan said the agency sent out a crew to the town on Friday to reinstall pin curbs that were removed and order new replacements as needed through the year 2025. The state is planning to an upgrade to State Road 38 that would replace the
pin curbs.

"Pin Curbs are not cost-effective, and obviously they are a little dangerous, especially when they hit snowplows. We don't want that for any resident or any Hoosier that has to deal with it. For all us, it's better to go to permanent curbs," said Duncan.

Duncan added, "As we go through and do projects, it's something we need to update and make it standard now, which is not pinned curbs."

Town officials who reached out to RTV-6 say they look forward to working with INDOT on short and long term solutions.

"The other board members and myself talked, we were put off to that person or that person. This person doesn't work with the state anymore — bounced around, so they came up for me to give you a call. You do a lot of work for people and wanted to see if you could help," said Leever.

"Great job. We appreciate it. Thank you," said Leever.