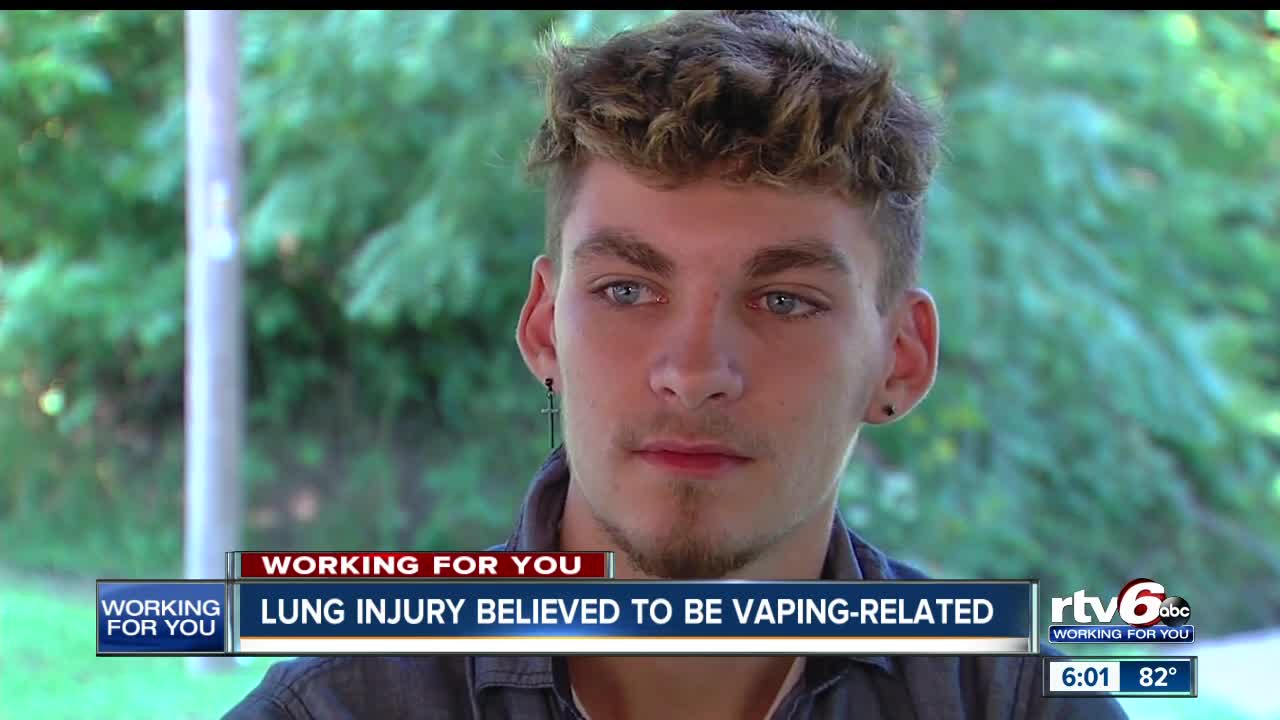 A Crawfordsville man told RTV6 he was just 20-years-old when his lungs collapsed. Something he believes was caused from vaping.

CRAWFORDSVILLE — Officials confirmed an Indiana resident died from a severe lung injury caused by vaping on Friday — the first vaping-related death in the state.

The state is currently investigating 30 cases of severe lung injury connected to vaping. The majority of which have occurred in people ages 16 to 29.

A Crawfordsville man told RTV6 he was just 20-years-old when his lungs collapsed.

"I would always argue how safe it was until it took effect on me," Kyle Lano, whose lungs collapsed, said.

At one point, you could've called Lano a vaping fanatic.

"I liked the clouds, the nicotine. I was really into it," Lano said.

Lano vaped regularly for about six years until last summer — when his left lung collapsed.

"My chest just got really tight, and I felt a sharp pain come right back up to my chest," Lano said. "At this time, I didn't think vaping had anything to do with it. And I told them that, so I didn't stop."

With no intentions of slowing down, a year later, Lano's right lung collapsed.

"Now, I believe it's vaping because it's the only thing I'm doing," he said. "There's no other reason why my lungs should've collapsed the way it did. 30 percent. I lost 30 percent of my right lung."

Six days Lano spent in the hospital. And although doctors can't say definitively, he's convinced his health issues are caused by vaping.

"I didn't know how serious it was until I was actually in the hospital until they showed me how small my lung was," Lano said.

"This lung illness for some people is coming on really fast," Heidi Hancher-Rauch, University of Indianapolis Public Health Director, said. "They haven't had symptoms very long before they go to the doctor and they're in the hospital very quickly with serious lung issues."

More than 215 cases have been reported nationally to the Center for Disease Control and Prevention.

Because e-cigarettes are relatively new, ever-changing and marketed as a "healthy alternative" to smoking cigarettes with tobacco — it's tough to say what's in them or what's behind the growing public health crisis.

But from one young person to another: